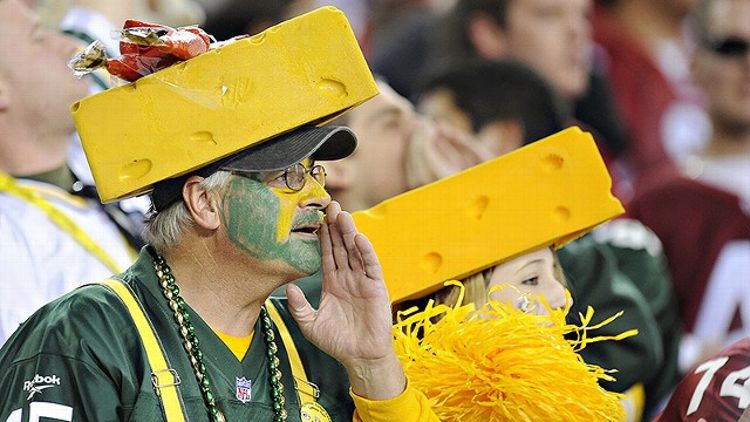 Last month, TBS announced that it was developing a reality show about Packers fans called Cheeseheads. This greatly troubled Grantland’s resident Packers fan, Steven Hyden, and greatly delighted our resident Bears fan, Robert Mays. Steven and Robert decided to briefly declare a détente in the border war between Wisconsin and Illinois in order to exchange e-mails about their expectations for the show. They quickly agreed that Cheeseheads is going to be terrible — though neither has actually seen it yet.

Steven: As a Bears fan, I know you’re anxiously rubbing your hands together in anticipation of this train wreck, whereas I’m filled with an all-too-familiar dread. I have zero confidence that Cheeseheads will be a nuanced depiction of smart, reasonable Packers fans with well-balanced diets. I fully expect it to be Fat Guy in the Yellow Foam Hat Who Always Gets Shown at Least Three Times During Every Nationally Televised Packers Game: The TV Show. And this depresses me, because Packers Nation is every bit as passionate and knowledgeable as any fan base of any iconic sports team. Lambeau Field truly is an incredible place to visit and commune with some of the nicest football-mad lunatics you’ll ever have the good fortune to meet. Packers fans are worthy subjects for a TV show, in other words. Unfortunately, they happen to reside in a remote patch of terrain that’s equidistant from coastal elites. And they talk funny! And they dress funny, too! Most Packers fans are good-natured, sincere people who live their lives in a non-self-conscious manner, which sets them up perfectly for mockery in the media. I am not happy about this. I quote Jeff Bebe: “Is it that hard to make us look cool?”

Robert: I’m looking forward to the Cheeseheads premiere like it’s a combination of my birthday, Christmas, and Week 1 of the NFL season. The eventual stars of this show know what I’m talking about — it’s the same way they’re anticipating November 23.

Everything that has you worried is actually what has me most excited. And it’s not because I think anything you said is wrong. It’s because I’m tired of it being so sickeningly right. The Packers are a model franchise that plays in a borderline-holy stadium filled by well-informed, well-mannered fans who actually own the team (although I’m still not ready to give you the well-balanced diets). And that’s exactly why I can’t wait to see all of them marginalized as a group of cheese-curd-noshing, Schlitz-swilling Kuhn chanters.

Here’s what I’m wondering: Is your concern here that this will actually change people’s opinions of Packer fans, and as a result, the Packers? Or are you more worried that the reductionist caricature aspect is going to enrage you to the point of committing a violent crime?

Steven: Here’s the thing: Growing up in northeastern Wisconsin isn’t like growing up in Chicago. As a kid, the only time I saw my part of the world on television was during Packers games. Otherwise, I lived in a media black hole. And it’s still like that for the most part. Football is the only lens through which outsiders perceive the people who live next door to me. And the media almost always uses that lens to portray us as simple-minded buffoons.

As for affecting the perception of the Packers, I can’t imagine that Cheeseheads will be a negative, because (from how it’s been described anyway) the show will likely conform to media stereotypes of the fan base. Maybe we’ll even get our own version of Snooki. (Snooki is a Jersey Shore reference, right? I’ve never seen it.) I imagine you must be hoping that Cheeseheads will diminish the Packers in some way, since you’re so giddy about it. Why must you drag my team down to the level of (deep breath) daaaaaaaaaaaaaaaaa Bears?

Robert: I’ll admit that, yes, part of me is hoping that somewhere, someone’s first exposure to the Packers is going to be these folks, and it will lead to that person hating the team forever. It’s been a rough 20 years to be on the Bears’ side of the Bears-Packers rivalry. When Lovie Smith got to town in 2004, he said his first priority was beating Green Bay. That’s something you say when beating Green Bay isn’t what normally happens. Then, somehow, the Packers went straight from Brett Favre to Aaron Rodgers. When I saw Ted Thompson in the press box at Candlestick Park in January, I spent at least a minute plotting how I’d kidnap him before deciding I didn’t know the layout of San Francisco well enough to manage a getaway. I guess what I’m saying is that it’s about time something bad happened to this franchise, and that’s why the idea of Lombardi’s team being represented by the most ridiculous sliver of the Wisconsin population is exciting.

There’s a part of me, though, that’s a little worried it might swing back the other way. What if they choose to turn down the volume on the beer and the brats and turn things up on how much these people love their team and where they’re from? The team has an undeniable appeal, to the point that when my former, sports-agnostic girlfriend moved to Wisconsin, my greatest fear was that she’d fall in love with the Packers, and I’d have to pretend I never met her. Is that the best-case scenario for you guys here?

Steven: I guess so. As much as the cheesehead image of Packers fans annoys me, it is pretty damn endearing. And if the extra attention on Packers fans can irritate some Bears backers in the process, that’s certainly a bonus. I think if Cheeseheads can accurately depict just how small-townish Green Bay truly is — it is probably the least metropolitan place on the planet, even by Wisconsin standards — people might come away even more amazed that this place has its own professional football team. (It’s 2013 and I’m not 100 percent sure that Green Bay even has a Best Buy.) The way the Packers have survived and thrived in Green Bay remains one of the most incredible stories in all of sports, and this is due in large part to the fans. The question isn’t whether this merits a TV show; it’s why didn’t it happen before now.

Fact is, I have no idea what Cheeseheads will be like. I mean, we’re both getting worked up over the possibility that it will be nothing but caricatures. This is exactly what people hate about the media — the way we endlessly natter on over speculation in lieu of facts. That, and all the Brett Favre hero worship, of course.

Robert: I don’t watch much reality TV (although still way more than you, evidently — the first season of Jersey Shore was an all-time great television experience), but my guess about “Why now?” is because we’re in the “Why not?” stage of reality shows. I’d struggle to name a subculture that hasn’t found a home on an obscure cable network. You’re right, though. I am surprised sports fans — people whose actual designation is “fanatic” — haven’t been given more dips in the crazy pool.

With respect to us getting worked up, I’d say it doesn’t have much to do with being members of the media. How many apprehensive explanations of Cheeseheads have you read on the standard slate of pop culture websites? I think we’re worked up because although there are plenty of reality shows about types of people from types of places, the specificity in play here has put something at stake for us. The Packers are a central source of identity for Wisconsites, and although my growing-up years featured a famous skyline and Michael Jordan, Chicago is a Bears town, and the similar personalities of its people and its football team has always been a point of pride. We, after all, are the Grabowkis.

That being said, my empathy with your trepidation doesn’t mean I’m not enjoying it. Full-on caricature would really be a win-win — not only because it would provide some sick satisfaction, but because it’s just one more thing Chicago has already done better.

Eastern Conference Finals Game 7 Preview: How We Got Here, and Where We're Going