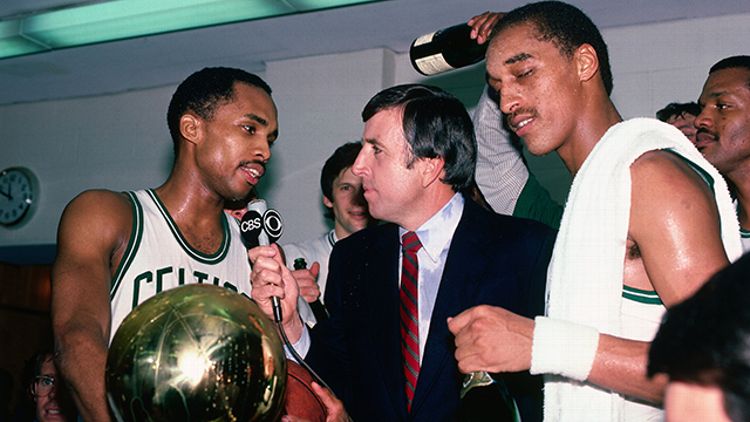 Outside the Boston Garden before Game 7 of the ’84 NBA Finals, scalpers were getting upwards of $2,000 per ticket. Since we were fortunate enough to own midcourt seats, I remember my father perking up as we heard the numbers being tossed around on Causeway Street. Four grand for our seats? He could barely afford season tickets as it was. That money could have paid for the next two seasons. It was enough to make him think.

Did he ever really consider it? Of course not. As basketball fans, we knew Game 7 of an NBA Finals was the ultimate experience. Ninety minutes before tip-off, every fan has already found his or her seat. You never sit down — not once for four hours. Your head throbs by the second quarter. By the third quarter your hands swell from clapping, and they’re like you borrowed them from a nose tackle. Everyone keeps giving everything they have — the fans, the players, the coaches, everybody — and it never wanes. You can’t possibly imagine the level of intensity, the overpowering electricity in the building, how it keeps going higher and higher.

Rarely are these games well played – there’s too much pressure, too much energy. It’s just a different animal. In Game 7 back in 1984, the electricity in the Garden suffocated the game to some degree, with both teams playing too frantically to settle into a groove. Then Cedric Maxwell took over for Boston in the second quarter, and Bird had a nice stretch in the third, and there were a couple of fast breaks that nearly blew the roof off, and suddenly the Lakers were running out of time before making one last run, right before Magic made two horrendous turnovers that sealed the deal. I can still see Bird waiting for the ball to shoot clinching free throws, so excited that he started hopping up and down with his fists clenched, looking like a little kid waiting to use a bathroom. In the stands people were jumping up and down and screaming at the top of their lungs. That’s what you do at the end of a Game 7 — you don’t even clap anymore. You just scream as loud as you can. You raise your arms over your head, you hug the people sitting next to you, you scream some more.

When the Celtics finally won the title, fans charged the court to celebrate, with the party carrying outside to Causeway Street for the rest of the night. We beat the Lakers. We beat the Lakers. Honestly, it felt like we had conquered another country or something. This was more than a game. It was a life experience, one of the defining moments of my childhood.

I kept thinking about that game while the Spurs outlasted the Pistons on Thursday night. You never beat someone in a Game 7 to win the title. You outlast them. You persevere. You survive. Maybe it wasn’t the greatest game to watch, but if you understood the stakes, understood what that building was like, understood the level of intensity … I mean, isn’t that what sports is all about? Tim Duncan played the finest game of his career Thursday night, controlling the second half as the only competent big man against a much bigger team. Ginobili followed suit, elevating both ends of his game when it mattered. Those were B-plus games for both of those guys, but if you’re a B-plus in Game 7, that gets rounded up to an A-plus-plus because of the stakes. And that’s all the Spurs needed to win the game.

We’ll remember them as one of the weaker championship teams in recent memory, a team that could be pushed around at times, a team whose quality players disappeared for entire games. They needed a miraculous effort from Big Shot Brob in Game 5 just to avoid an ignominious 3-4-5 sweep in Detroit. They couldn’t close out the resilient Pistons in Game 6, which any of the better NBA champions in history would have done. Yet none of that stuff will matter 50 years from now. As Joe Theismann would say, championship teams win championships. The Spurs did just enough to win, and their superstar protected his house when it counted. Just like old times.

Lost in the shuffle were the defending champs, who defended their title with the requisite amount of honor and integrity. They carried championship belts like boxers, shouted “on and on and on” before games, always thrived with their backs to the wall. Some kept comparing them to the Patriots, and their impeccable record in must-win games and closeouts put them in the general ballpark. But the Pats won 34 of their last 38 games and haven’t lost at home since December 2002. The Pistons never dominated over a prolonged stretch like that; if anything, they reminded me more of Winky Wright, the middleweight champ whose astonishing defensive skills suck the life out of his opponents. When you watch Winky, you find yourself thinking things like, “Will anyone ever land a punch on him?” And, “If everyone fought like this, boxing would go out of business in five years.”

The Pistons were a little like that. And it nearly worked to the tune of back-to-back championships. At the same time, nobody was burning DVDs of last month’s Wright-Trinidad fight and selling them like hotcakes on eBay. And nobody will be burning DVDs from the 2005 Finals, with the glorious exception of Game 5. Even though these were probably the two best teams in the NBA, the Spurs and Pistons couldn’t quite bring the best out in one another over these last two weeks. To steal another boxing analogy, styles make fights. And these styles never quite meshed.

But Game 7 turned out about as well as we could have hoped. The atmosphere felt right, the right players stepped up at the right times, and you couldn’t reasonably expect anything beyond that. For anyone lucky enough to be sitting in the building Thursday night, I bet you will remember that game forever. I know that’s the case for my father and me. Last year, during the 20th anniversary of that Celtics-Lakers game, I couldn’t resist asking Dad if he truly contemplated selling those Game 7 seats. He smiled and shook his head no.

Image Is Nothing: Grant Hill and His Amazing '90s Sprite Ads