The Exciting World of the Post-Dwight Houston Rockets 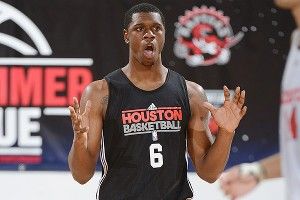 Here’s the bad news for Rockets fans: It’s looking more and more like Houston won’t be getting Dwight Howard. Here’s the good news: All the assets that Houston piled up in their attempt to get Dwight are going to make up a team that is fun as hell to watch.

Most of the talk about the Rockets has revolved around Howard and the guy who will be playing point guard for them next year, but in watching clips of Houston’s summer league games, the new guys are the ones I’m excited about. In five games, Jeremy Lamb — this year’s Guy Who Got Drafted Too Late for No Good Reason — has put up more than 20 points per game on 46.7 percent shooting. In his 26-point outing against the Wizards, he scored from just about everywhere on the floor. The concern about Lamb was that he struggled to be efficient as UConn’s primary scorer, and while that hasn’t been assuaged by five games against guys fighting for roster spots, he’s had one of the better showings in Vegas.

Fellow first-round pick Terrence Jones has spent most of the summer league showing that the idea of him being a better NBA player than a college one is warranted. In talking to a friend on draft night, one thought we had about Jones was what, if any, truly exceptional NBA skills he had. Then we decided that being 6-foot-9, 250-pound dude with lift, soft hands, and a feel for the game should probably count as a plus NBA skill.

If early highlights are any indication, Royce White’s plus NBA skill is making unnecessarily awesome passes. I want to see so many more of these.

Making his debut alongside Houston’s picks from this year’s draft is last year’s 20th overall pick and 2011 Grantland YouTube Draft star Donatas Motiejunas. It took about a quarter of Motiejunas’s summer league debut against Toronto for him to become Chris Webber’s new favorite NBA player. The 7-foot Lithuanian scored 25 points on a combo of silky 3s and sneaky low-post moves that couldn’t have made Rockets coach and third man in the booth Kevin McHale any prouder. It feels good to have the world finally know what we at Grantland have believed so firmly for the past year: Donatas is a star.

All of this is without Jeremy Lin and Omer Asik, whose offer the Bulls are apparently not going to match because they want to sign Darko Milicic and ruin my life. At least as Chicago’s season devolves into a total train wreck, I’ll be able to count on the post-Dwight Rockets as a weekly basketball savior. Who isn’t excited to watch this team?

Eat My Goal: Jose Villarreal Gets on the Board for L.A. Galaxy

Olympic Fever! Catch It! But Make Sure You Spell Olympics Right!