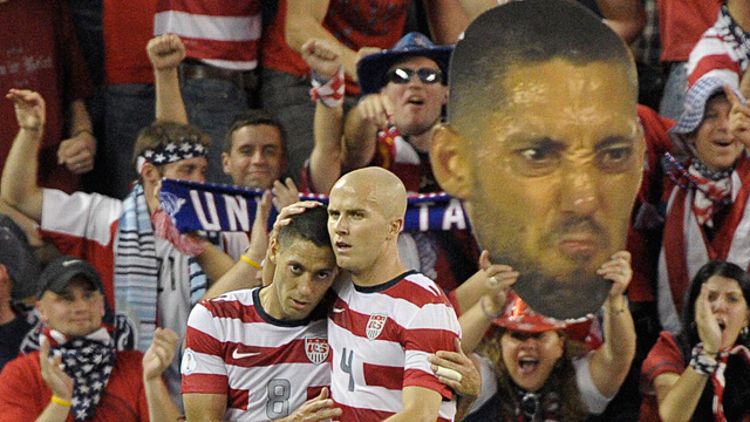 I love international games of course. Not the friendlies, obviously — I hate those — and all but the very final game of qualifying, or the games in the tournament that don’t involve my side after we’ve been eliminated. I hate those, too. I probably hate the first two “phony war” group games in tournament play — I like the extended state of exception of tournaments themselves, just not the majority of the games in them — and there’s usually a game during a tournament where your side gets involved in an epic, extra-time-then-penalties struggle during which you’re dimly aware of the zero-sum truth that there are no actual winners emerging from this and that the tournament peaks here for both sides, regardless of final score. I hate the hollow feeling those leave afterward. But yes, I love international games — that much should be clear.

But I’m basically a club man. And those weeks where I’m wrenched from my cozy circadian rhythms of predictions, spreads, form teams/players, multiple staggered games (one of the joys of watching MLS is a fact that is often touted as a potential weakness in its promotion — the staggered kickoff times) and localized micro-intrigues (“Is Danny Califf going to grow a new knee by Saturday?” “Is Brad Evans preparing to comment?”) into the international realm — those are weeks I resent.

So anyway, last Friday I went round to watch the USA game against Antigua & Barbuda, with two other people who make their living in and around MLS and U.S. soccer. After the drab affair drifted mercifully to a close, we were left with the uneasy realization that we now had the weekend off. One of us offered that he was maybe going shopping the next day and was in the market for a tweed jacket. There was a long pause. Someone said J.Crew was good these days. I thought about an elbow-patch rant, but let it slide. We had a final rally to wonder whether the ampersand should always be used when referring to Antigua & Barbuda, but nobody’s heart was in it. I got my coat. The weekend stretched interminably in front of me. On Saturday afternoon I watched part of the Being Liverpool marathon crawl by on Fox Soccer before shuffling disconsolately to the local movie theater to finally see The Master. Later I dreamed uneasy dreams of seven-minute takes of a tic-laden Steven Gerrard walking slowly up a par-4, and of Brendan Rodgers hunched over a sink holding three envelopes with names in them. I woke up in a cold sweat, with only Tuesday to look forward to.

I think international coaches hate international weeks, too. Read the theories of any playwright with megalomaniac ambitions to transform their craft and sooner or later you will find them wishing that instead of dealing with actors, they could deal with more or less ambitious animatronic robots — who still need trailers, but can be flat-packed in them and towed by tractor. Prior to hitting light operetta fame with Sullivan, W.S. Gilbert used to write very dark farces, where he would instruct his performers to perform as if they were animals, stopping just short of baring their teeth — character development was of no interest to him. In the late 19th century, Gordon Craig (not to be confused with Gordon, Craig, the perpetually injured Scottish goalkeeper) died in poverty, having envisaged a complicated system of marionettes that didn’t care about their motivation, meaningful character arcs, or whether there were any good parts written for wood of a certain age. More recently, James Cameron managed to combine motion sickness and claustrophobia in one sensational cinematic experience by bypassing actors in favor of cyan pixels.

It must be frustrating being an international coach — on the one hand you’re powerful, yet that power is of the intermittent variety, and you are curiously removed from the rhythms of the day-to-day lives you affect, existing only as a slightly unstable royal eunuch who nonetheless gets to mess with the heads of your subjects every time an international week comes around.

Having got your team of sullen millionaires (or thousandaires if they’re culled from MLS) together and insisted that “this is going to be fun,” you get to expound your theories that have had no recent empirical testing since that unfortunate 2-0 setback against Azerbaijan, and which are roughly as reliable as a system for roulette that you’ve “thought through carefully.” Then you assemble a cast that, on paper, looks like they should work together, coming as they do with an epic backstory of club achievements, media clamor, etc. Then your actors line up on the field, roughly where they do when they’re with their clubs, the whistle blows and suddenly … Ishtar.

And over at the side, you can see the coaches looking down at the FIFA rankings, then back to the field and going “Why aren’t these effing things plug-and-play?,” while on the field two international midfielders whose range of much touted abilities might now suddenly best be described as garden-variety-dogged-meets-garden-variety-dogged, are now playing sideways while ignoring each other, looking worriedly at the here-be-dragons terrain beyond the halfway line, and glancing coyly around them as if to say “I can’t go when he’s watching.”

Afterward we have long postmortems on just what affects them — whether it’s anxiety at the “bigger stage,” an incompatible system, the coach’s tactics, or something someone on the field once said to someone on the field — that’s been adding to the pressure. And then the whole circus disperses as if it never existed and all that’s left is the coach — a curiously isolated Italo Calvino character outside the city walls — insisting there once was a team here and that he ruled it.

It’s not even club before country, it’s just that club soccer is where I live — international soccer comes to visit. I think I share this experience with a lot of fans — some of whom are cheerfully non-conflicted members of club supporter groups as well as the American Outlaws. Slightly more specifically, I’m writing this from the uneasy position of being an adopted citizen — I have a lot of the characteristics of a first-generation immigrant with a desire to assimilate and prove the extent of that assimilation, with all the ambivalence about nationalism that allowed me to transplant my life across the world in the first place. When I was watching that U.S. game last week, and the highlights of England’s defeat of San Marino came on at halftime, I was genuinely irritated that anyone in the room thought that as a born Irishman I might care, and just as irritated when the U.S. game resumed and it was assumed I didn’t care as much.

Identity politics aside, and back to the bracing hatred of international week, there are more specific reasons why my dislike is pure:

For one thing, there’s the fact that players come back … broken. Roy Miller ambles off to Costa Rica as an athlete and comes back, to paraphrase Chris Morris, in a crumpled bone heap, with an apologetic note about something that happened at baggage claim. Players from all round MLS head off to join the Canadian national team for a vital World Cup qualifier and come back writing war poetry.

Then there’s the pontificating in international week — and I hold my hand up here (the one I’m not pontificating with): the editorials; counter editorials; injury updates; tactical analysis; coach’s comments; reaction to coach’s comments; clarification of coach’s comments; reactions to coach’s comments wondering why he should feel moved to have clarified his comments; injury updates; thundering editorials about how the previous coach never made comments and when he did he never clarified them; press conferences where the coach is asked about the reaction to his comments and deflects the questions with gently humorous sarcasm while giving supplementary injury updates; thundering editorials questioning the appropriateness of “gently humorous sarcasm” given the delicate national psyche; voices of reason suggesting we lighten up and give the coach a chance, pointing at the standings; a final injury update — “He’s doubtful.” Finally a ball will be kicked, accompanied by the agitated murmurings of color announcers.

We are often told about the “grind of qualifying,” especially in CONCACAF — and it’s true that World Cup qualification in this region is a relentless slog through shell defenses, whimsical refereeing, non-existent groundskeeping, and, of course, public expectation. But the real grind — the one producing that high-pitch squealing that you may be dimly aware of in the background of international week — comes from the digital mills grinding their gears without the actual oil of events. The news sites, blogs, podcasts, and Twitter accounts are still functioning at their usual tempo, but with only one disinterested two-hour stroll around a foreign field to actually respond to, they create feedback loops of self-reflexiveness that grow ever more baroque in shape, if not meaning, as the game approaches.

It makes me think of the difference between digital and analogue sound, where digital is made up of small “slices” of numerical values that, when strung together, deceive the ear to thinking it’s hearing a singular, “organic,” analogue-style flow. If there’s a sound of the soccer media during international week, and particularly the current incarnation of U.S. soccer media (forged in the digital era), it’s the sound of a heavily compressed MP3 of 200BPM Dutch nosebleed-gabba-techno being played for hours on end (“OOmpish OOmpish OOmpish OOmpish”). You could argue that of course that’s the sound it always makes, but international weeks, with their dearth of action and excess of commentary, are particularly dissonant. When nothing much happens but everyone’s talking about it, it just alerts you to the mean reaction time and speed of response that’s the hallmark of MLS commentary in particular — and the realization is alienating. That’s genuinely not to disparage the many fine voices and perspectives that make up that commentary — I’m just talking about the pace that the “machine” is set to work at and how it seems a strange tempo to be looking at the international game with — like a sprint coaches’ symposium on “What’s up with marathons?”

It’s getting better — the current resurgence in print and film works on the game in the U.S., offering perspective and some crucial deceleration in the race to describe and respond. And the accumulated experience of writers who in some case have been following the league from the start, let alone those who have followed since the original NASL days and beyond, does find both on- and offline venues to express an ever-more layered local history. But too much discussion around the international game is conducted at the pace we judge the domestic league — and that structurally gears any possible, actual version of events to be met with disappointment.

I don’t know if Jurgen Klinsmann is the answer. I suspect the wrong questions are continually asked. But I do know that during my marathon hateful weekend-of-not-much-soccer I re-watched Frost/Nixon on Netflix and found myself thinking of the California-based coach while watching Frank Langella’s Nixon at the end of that movie — a lonely man looking out over the Pacific, removed from power and daydreaming of his own relevance. On the one hand, that can’t be healthy, but on the other hand he’s not on Twitter. In international week, it actually looked peaceful.

Jalen Rose and Bill Simmons Will Be on NBA Countdown