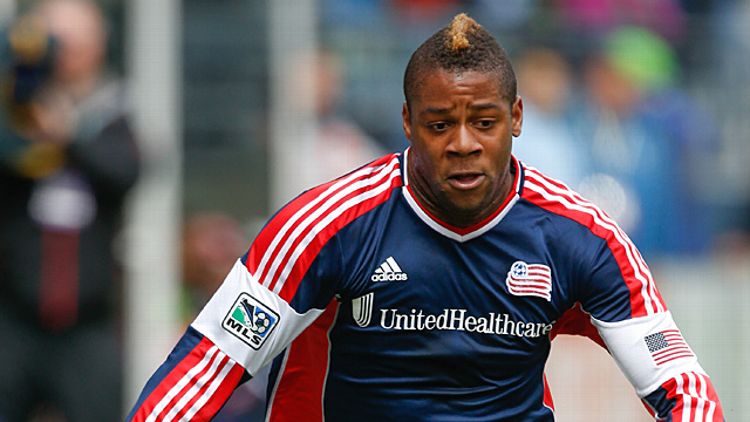 In January, the Designated Player told the stories of two young hopefuls at the MLS combine, Andrew Farrell and Machael David. Having promised to follow the pair through their rookie year, he catches up with Farrell, the no. 1 draft pick, after a turbulent week for the New England Revolution.

“I just lost him on the sideline, and I should have stayed central and kept him wide. But he just came out of nowhere and put it away.”

I’m speaking with Andrew Farrell in a locker room after a match, at the end of one of his toughest weeks since signing with New England Revolution. Right now, he’s reliving the moment when New York’s Thierry Henry lost him en route to the Red Bulls’ third goal in a 4-1 Revolution loss. Understandably, he’s distracted — half talking to me and half to himself.

“It’s just going through my head time and time again.”

The week began with Boston thrown into upheaval by the marathon bombing. As the initial chaos of that event settled into concern for loved ones, the Revs family learned that the father-in-law of veteran goalkeeper Matt Reis had been seriously injured in one of the blasts. On the Friday of that week, I’d spoken with Farrell as the team bus made its way to New York, without Reis. It was apparently a slightly surreal ride down. Just after the team left, the city was put on lockdown as the net tightened round Dzhokhar Tsarnaev, and throughout our interview, news and social media updates were relayed to players via the bus Wi-Fi.

The soccer, when it came, promised to be a relief — a return to some sense of normality, and perhaps a chance for Farrell to consolidate his burgeoning reputation (he is already a deserving front-runner for Rookie of the Year). But after displaying the niceties of respectful protocol (including a joint fan march to the game featuring New York and New England fans carrying a banner proclaiming “New York stands with Boston”), it’s business as usual for New York and Thierry Henry, who help steepen Farrell’s learning curve.

From early in the game Farrell’s flank is targeted by Red Bulls midfielder Jonny Steele and the overlapping Roy Miller, frequently supported by Henry, who is in imperious form — flicking outrageous first-time passes, trapping the ball with conspicuous nonchalance, and generally pointing out to the young defender, “By the way, I’m Thierry Henry.” In the first half Farrell is able to give a decent account of himself — at one point crunching into Steele in a reminder of the physical prowess he has demonstrated early in his MLS career. But late in the game, with his side trailing 2-1 and pushing for an equalizer, a tired Farrell is caught out on the blindside by Henry. The French legend ghosts past the young defender and scores New York’s third to effectively kill the game. Moments later, Farrell is beaten again for speed at the end of the game, as Steele races ahead of him to score a tap-in. 4-1.

Back in the locker room, I ask Farrell what he can learn from a game like this.

“Probably how forwards like Henry move at key moments in the game. You think they’re kind of out of it — they’re sort of relaxing on the sidelines, then boom, they make a move and punish you for it. At college, a lot of forwards don’t do that — I mean no forwards do that. And I’ve just got to learn. It’s going to be a tough, tough bus ride home.”

When I speak to Steele after the game, he mentions that Farrell was on New York’s radar — the four games he’s played to this point being a meaningful sample size for analysis — and Red Bulls coach Mike Petke confirms that a few days later, saying, “He’s a good player, he’s got a good future. But he’s young and a bit inexperienced, and definitely in the footage that we’ve watched from previous games, he was easily pulled out of position at times. So yes, it was definitely something I spoke to Jonny [Steele] about. Thierry did a great job on the goal specifically, on going out to his side and kind of faking on going to the ball and getting behind him. So it was definitely in our game plan.”

Farrell seems to be the type to acknowledge and absorb setbacks while being confident in his ability to move beyond them. His coach, Jay Heaps, will be banking on that. “I’m not so worried about the third goal. When it’s a one-goal game and Henry gets wide and makes that run when he does, you just tip your hat to him — Henry literally made the most perfect run I’ve seen in a long time. It’s a good lesson for Andrew to get. Having walked that walk as a player, I can tell you that the highs and lows of this game are brutal — the swings. He’s a little bit more even-keeled than most players, with his maturity.”

Farrell’s resilience is part of what Heaps saw in him at the MLS combine. The coach had been tracking Farrell since his sophomore year in college, having first shown an interest in his Louisville teammate Austin Berry (who went on to win Rookie of the Year honors with Chicago Fire last season). “What struck me with Andrew, and I wrote it in my notes at the time, is how humble he was, and how he spoke about his team mates. And this is in college. Andrew came across completely differently than how I expected, in how humble he was and how endearing he was about his team mates. Just how he spoke about them, I thought there was something special about the kid.”

Farrell continues to speak glowingly about his teammates on a professional level, crediting central defender AJ Soares for helping him with his positioning and decision-making. “In college, at times, I tuned out late in the game, and that’s when I made most of my mistakes. So I’m trying to stay focused for the full 90 minutes, and I look to AJ all the time and he’s saying, ‘OK, your legs are heavy now, you’ve got to tune in, you’ve got to focus even more now.’ That’s something that’s helped me a lot.”

Soares left the New York game injured after 18 minutes, so there was no familiar voice to remind Farrell of his responsibilities and focus as the minutes ticked down. Heaps acknowledges that but says that “in a situation like that, he has to take a step back and understand it’s not A.J., it’s self-motivating, and he has to have the awareness to take a step back, get his breath, and show a little more awareness positionally.”

Despite the odd youthful setback, Farrell is serious about improving. Returning to Boston after preseason, he elected to move into an apartment outside the city, closer to the stadium.

“My first year I just want to focus on the soccer part of it, not necessarily on being in the city and all the kind of distractions that that has — not try to be too flashy, not trying to be something that I’m not. I’m not a partyer, I don’t go out, I don’t shop that much. So somewhere that’s easy, clean, and it won’t be too hard to get to practice every morning, I won’t be late, dealing with traffic. And then when my parents come we won’t be too far from the city. I think it was the best decision for me.”

Trying to lighten the mood a little, I say that he’s told me all the things he doesn’t do, so what does he do?

“Actually, I bought a guitar! I’m not good, but I’m learning. I can play two songs. I can play ‘Knocking on Heaven’s Door’ and ‘Somewhere Over the Rainbow.’ And I got my keyboard and I’m learning some new songs. I can’t read music, so I have to watch YouTube videos.”

There’s no music in the locker room after the New York game — just the muted hum of activity of a team anxious to get back to its own city. Just before I went into the room I’d spoken to a friend at the game and mentioned I’d be speaking with Farrell. “Oh man, Henry just left him on that goal. But hey, tell him [Farrell] to take a ticket. Like he’s the first player Henry did that to?”

I share something like that platitude with Farrell, adding a muttered anecdote about an Italian defender talking about playing the Argentine striker Gabriel Batistuta, and how he would appear to be sleepwalking through games up to the second he scored. Farrell smiles ruefully and says softly “That’s what it felt like.” In New England’s next game, Andrew Farrell plays the full 90 minutes against Philadelphia Union. The Revs shut out the Union on the way to a 2-0 win.

Jordan Crawford Has Five On It