The DaMarcus Syndrome: Now That the U.S. Has Won the Gold Cup, Will Its Captain Play Again? 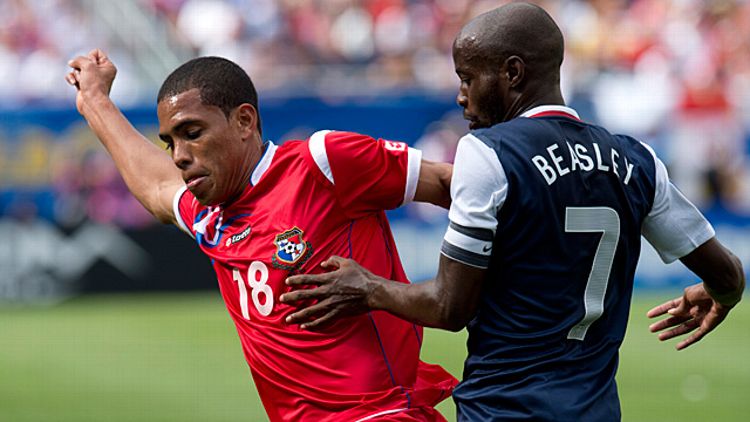 All athletes come with an expiration date, and for soccer players, it hits roughly around their 32nd birthday. But like on a jug of milk, the date acts simply as a recommendation. While Gold Cup captain DaMarcus Beasley’s “sell by” moment will be past due come Brazil 2014, there’s a deceptive quality to his freshness. He retains a spry, youthful feel for the game, playing with a bright-eyed wonderment that a U-17 player could only hope for. The only predicament is whether there’s room for a player who is simultaneously too young and too old for the USMNT World Cup Squad.

In many ways, DaMarcus Beasley epitomizes the old-school/new-school split that Jurgen Klinsmann confronts in selecting his Brazil squad. At first, when Klinsmann became manager two years ago, USMNT fans had to keep a cheat sheet close at hand just to know who was on the field, matching up young faces with Klinsmann’s notoriously nameless jerseys.

Early omissions of veterans such as Michael Bradley and Clint Dempsey roused suspicions that Klinsmann was clearing house and that we’d see a wholly new team in 2014. Having endured 36 different starting lineups in Klinsmann’s 37-game tenure didn’t help players or fans become any more familiar with the team. But in the midst of a changing and unclear roster for the World Cup, Klinsmann’s message has been crystal-clear: Whoever wants it most can get it. Lucky for Beasley, he wants it. Wants it bad.

Despite his age, Beasley is fast. It’s the physical manifestation of his desire to play; he wants to be everywhere on the field at once. While most players his age have clocked too many miles, Beasley has the benefit of not having worn down his motor. His play with the U.S. squad has been infrequent in the past four years. As for his club career — bouncing between PSV, Manchester City, Rangers, and Hanover — he’s spent a lot of it in the trainer’s room, recuperating from injury, or on the bench. He’s only now starting to make up for lost time at his club Puebla.

Beasley’s availability and willingness to play anywhere — as long as he was, you know, playing — might be his greatest asset. Last March, while looking for an adequate substitute for injured left backs Edgar Castillo and Fabian Johnson, Klinsmann began to reimagine Beasley’s role as a defender. According to Beasley, the conversation took “10 seconds,” and, knowing Beasley, it probably went something along the lines of:

Klinsmann: Beasley, I want you to …

Beasley: I’ll do it!

Pulling him from his typical winger position, the coach’s current vision for Beasley falls somewhere along the lines of an electron: as neither particle nor wave, and only predicted to be in a certain place at a certain time. He has encouraged Beasley to fluctuate between attack and defense, using his speed to make stray runs up the left flank, allowing for a more fluid, shifting style of play. You could think of Beasley as the Roberto Carlos of the U.S. Kind of.

Is the plan working? Yes and no. Beasley’s role was custom-tailored for the attack-minded Gold Cup squad, the one that walked away from the tournament with the trophy and a jaw-dropping goal differential of plus-16. In the absence of Michael Bradley, whose passing genius makes up a healthy majority of midfield transitions, Beasley made plenty of key connections between the back and front. He utilized his speed to shoot up the left wing, firing southpaw crosses like the beauty he delivered to Donovan in the 56th minute of the Gold Cup final.

It also bears mentioning that Beasley’s stature embodies a new shift in the U.S. defense. At 5-foot-8, 125 pounds, Beasley is the anti-Onyewu. This represents the deemphasizing of the brute physicality that was the cornerstone of the U.S.’s defensive philosophy. Big shoves in the 18-yard box are more likely to provoke penalty kicks, whereas matching feet and good timing are likely to produce a turnover without a flash of yellow or red. Klinsmann has done a lot of work to iron the U.S.’s passes down to the carpet. And with Beasley’s ground speed, that’s the plane that he dominates best.

But at the same time, Beasley’s role contradicts the kind of short-passing, hard-back-lined defense that was painstakingly integrated into the A-team of the World Cup Qualifiers. He can’t be everywhere at once. With Beasley cheating toward the offensive half, there is no fourth option for short passes, leaving U.S. defenders to play riskier up-in-the-air long balls for clearance. (Not to mention that Beasley is no master of the tiki taka himself.)

Also, Beasley’s absence on the back line means that the remaining three fullbacks have to cover his position, often leaving the left wing and the center vulnerable to counterattack as they shift to fill space. In the ninth minute of the Gold Cup final, for example, Beasley pushed up to play a more midfield defensive role, and left the area behind him open for a dangerous run by Panama’s Gabriel Enrique Gómez. It’s at times like these that you wish there existed some kind of pragmatic veteran Beasley to trump the eager-eyed and youthful Beasley.

Yet there’s an intangible quality to Beasley that earned him the captain’s armband over Donovan. While being captain of an off-year Gold Cup can feel like being nominated mayor of a parking lot, making Beasley captain speaks volumes about Klinsmann’s values. This is the kind of guy whom Klinsmann could call at 3 a.m. with a secret, and Beasley would keep it forever. And he probably does. In fact, it was a foul on Beasley that got Klinsmann ejected from the game against Honduras.

In the wake of the USMNT B-squad Gold Cup revelry, the A-squad lineup will return to fill in their rightful place for Qualifiers. And while I’d much rather hear a postgame interview from Beasley than one from Dempsey, the chances of Beasley taking up the armband again are slim to none. In fact, based on Fabian Johnson’s exceptional play in the same position, and Beasley’s simple passing mistakes and turnovers during the Gold Cup, the chances of seeing Beasley on the starting lineup aren’t too hot either. But that being said, I wouldn’t be surprised to see Beasley in Brazil, sprinting off the bench as an X-factor substitute. At any position.

Liam Daniel Pierce (@LiamPierce) is a freelance journalist, based out of New Orleans, where he is a member of the Bayou Militia US Soccer Supporters.