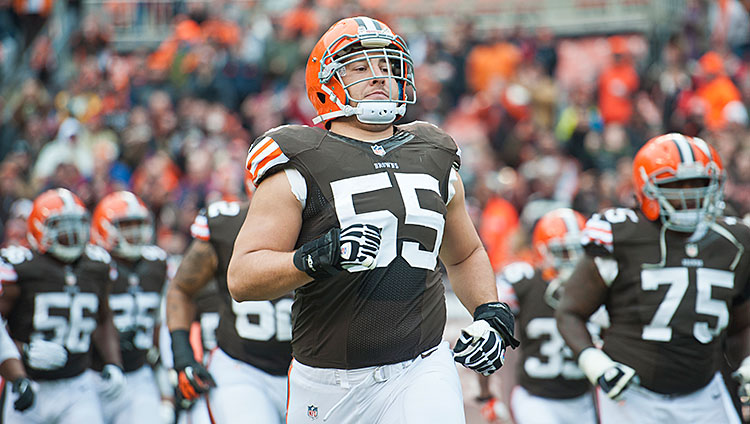 The Jaguars are not every other NFL team. This is important to remember if we’re going to talk about Alex Mack. On Wednesday, Mack, the Browns’ 27-year-old (deserving) Pro Bowl center, agreed to a five-year offer sheet worth what we can only assume is a lot of money. Rather than franchise Mack this offseason, Cleveland slapped him with the transition tag, a slightly cheaper option that has the downside of well … this. A team is allowed to sign Mack to an offer sheet, but the Browns have five days to match.

It’s a risky option when dealing with maybe the best center in the league, but Cleveland’s reasoning is easy to understand. The franchise tag for offensive linemen doesn’t distinguish between positions. For any lineman tagged, the cap number would be about $11.5 million. Carolina’s Ryan Kalil is the highest-paid center in football; he’ll make about $7.3 million next year. By giving Mack the transition tag, the Browns saved about $1.6 million, but the basic lesson here is that teams don’t want to pay centers.

Center isn’t running back, but the position is clearly marginalized when it comes to resources. The Cowboys were panned for taking Travis Frederick in the first round last year, and even after his pretty great rookie season, most people haven’t come around on the move. Cleveland’s hope was likely that Mack’s sizable payout this year would be enough to deter him from jumping at anything less than a massive, potentially irresponsible deal from someone else. If that deal came, there was a good chance Cleveland wouldn’t want to match anyway. Yesterday, that deal happened.

The early reports on Mack’s offer from Jacksonville have said he’ll make $27 million in the first three years, every dollar of that guaranteed. For almost every other team in the league, that deal is miserable, but again, the Jaguars are not every other team.

For a full-scale account of how awful the Jags have been the past five years, read what Bill Simmons wrote early last season. The quick version is that the organization has been a train wreck. Jacksonville’s record in the past five seasons isn’t actually that bad. It finished 8-8 just four years ago. The problem for head coach Gus Bradley and general manager Dave Caldwell, both of whom took over last year, was that the roster was bare.

Go back and look at the past decade of Jaguars drafts. It doesn’t even seem real. There isn’t a single above-average contributor left on the Jacksonville roster from that stretch. You can make an argument for Cecil Shorts. He’s the only one. That’s really hard to pull off. Eugene Monroe, Terrance Knighton, Rashad Jennings, and Reggie Nelson are elsewhere. Blaine Gabbert is already gone. That list is a pass-rusher graveyard.

Bradley knew all this from the start, and it’s the reason he tempered expectations from the beginning. Last season wasn’t about wins for Jacksonville. It was about establishing a set of organization-wide habits. That was obvious in the last quarter of the season, when the Jags were 3-9, but still scrapping until the end against teams better than them. There were signs of life, and that’s how these things start.

The next step is where Mack comes in. At a certain point, players buying in isn’t enough. Bradley has stressed process over results, but eventually, the results have to come.

When the Jags trotted out their roster in Week 1 of last season, it was almost completely devoid of actual NFL talent. Maurice Jones-Drew was hurt. Justin Blackmon was suspended. The rookies who would offer promise by year’s end — free safety Johnathan Cyprien and cornerback Dwayne Gratz — were playing their first game.

This offseason has been about giving Bradley workable pieces. There’s a reason Red Bryant and Chris Clemons were cut by the Seahawks. They aren’t foundational pieces on teams looking to win a championship, but the Jaguars aren’t one of those teams. This period in Jacksonville is about putting together a roster with real players, in order to maintain a standard for the next several years of (hopefully) successful drafting. Players like Bryant and Clemons are part of that. Mack is the furthest extension of it.

Jacksonville will have to overpay for him, but in this case, that price is worth it. Call it the competency tax. Contracts given out by different teams aren’t created equal, and even though in a vacuum Mack’s deal looks harmful, it’s worth it. Part of the hesitation for teams to spend big money in free agency is that down the road it’ll prevent them from locking up the in-house talent they’ve brought in. Well, the Jags don’t have any of that. Any young player worth re-signing will come due after the majority of Mack’s front-loaded contract is off the books. By the time this team is actually ready to compete for a championship, there’s a good chance Mack will no longer be taking a massive chunk out of the salary cap.

When I heard the Mack news, the first person I thought of was Al Jefferson. For a lot of people, the three-year, $41 million deal the Bobcats gave Jefferson, a defensively nonexistent big man who’d be 31 at the deal’s end, was met with snickering. It wasn’t the type of deal good teams make, and the reception said as much. Here’s the thing about the Bobcats, though. They aren’t a good team. Charlotte was paying the competency tax in full. Nine months later, the Bobcats are the 6-seed in the East, heading to the playoffs for the second time. Even by sheer roster size, basketball isn’t football, but the idea is the same. At some point, teams need to want to win, even just a little. There’s a chance Jacksonville regrets the Mack contract two years from now, the same way Charlotte might with Jefferson. In the meantime, having him in the fold means one more step toward relevance.