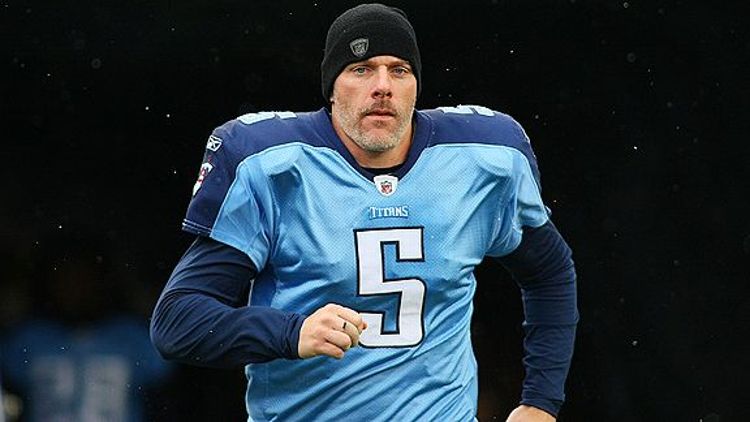 Great, now we’re going to have to put up with the Great Kerry Collins Un-Retirement Watch every August until the end of time. We finally get Brett Favre’s career put in the ground, and you job us like this, Kerry? And you, Indianapolis Colts. This was your contingency plan in case Peyton Manning missed time? Signing a guy whose best moment came in an NFC title game 10 years ago?

The move raises obvious logistical questions about whether Collins can adequately learn the Colts’ playbook and be ready to contribute something useful in just a few weeks. Or, as wide receiver Reggie Wayne eloquently put it, “We don’t even know [Collins], we ain’t vanilla, man, we ain’t no simple offense.”

If Favre was always “like a kid out there,” the last decade of Collins’ work has been more “like a prematurely grizzled old guy out there.” By now it’s hard to even remember Collins as a young QB; it seems like he was born staring ruefully into the middle distance with three days’ worth of graying stubble.  If Tom Waits ever writes a sad song about an exhausted journeyman quarterback, it will almost certainly be called “The Ballad of Kerry Collins.”

At this point in his newly revived career, the highest praise one can heap on Collins is that he’s not terrible. Football Outsiders ranked him 26th in passing DVOA for the 2010 season, just behind Donovan McNabb and Jay Cutler.  He’s not great, but he’s certainly serviceable. Collins isn’t the kind of guy you’d want to give a big free-agent deal, but he’s a reasonable, cheap option with a chance to not be totally atrocious. It’s hard to imagine Collins being able to replicate Manning’s frantic presnap gesticulating since he’s only marginally more animated than the average corpse, but starting him isn’t a complete catastrophe. In other words, he’s neither Manning nor Curtis Painter. Which, when you think about it, sort of makes sense.

The Collins signing raises a more interesting question for the Colts, though: What’s the point of even having Painter as your backup? Isn’t a backup’s job to, you know, step in when the starter goes down? To back the starter up, if you will? Granted, it’s a tiny sample, but Painter’s career stats when he’s actually played are decidedly sub-JaMarcus Russell, complete with a robust career QB rating of 9.8. When your Week 1 starter is looking forward to his first completion to secure that coveted double-digit career passer rating, something has gone horribly wrong.

Painter’s not exactly a kid, either. He’s 26 years old; that’s the same age as Joe Flacco and Matt Ryan. If he were going to be a useful quarterback who could actually play in NFL games, the Colts would probably know it by now. Instead, the team is paying him several hundred thousand dollars this year and apparently hoping to god that he never gets anywhere near the field. “Look, Curtis, we have absolutely no confidence in your ability to play quarterback. Here, have a sack full of money!”

Sure, Manning has been seemingly indestructible for the past 13 seasons. Before this summer, it seemed entirely possible that he was a cyborg programmed to throw footballs and make commercials. Still, he’s 35 years old. Shouldn’t the Colts have developed some sort of Plan B in case he got hurt? Or was the team’s logic, “We’ve never seen Peyton miss time due to injury before, so obviously it can’t happen. Also, if you sail too far toward the horizon, you’ll fall off the edge of the Earth!”?

Maybe Manning will be back for the start of the season and Collins will pleasantly drift back into whatever it is retired QBs do. Maybe Painter will prove himself to be the second coming of, say, Sage Rosenfels. (Beggars can’t be choosers, Colts fans.) In the meantime, there’s probably at least one person in Indianapolis who’s not being ironic when they say, “Hey, does anyone else miss Jim Sorgi? I do.”

Wonks: Strasburg Fever is Real, Even in the Minors