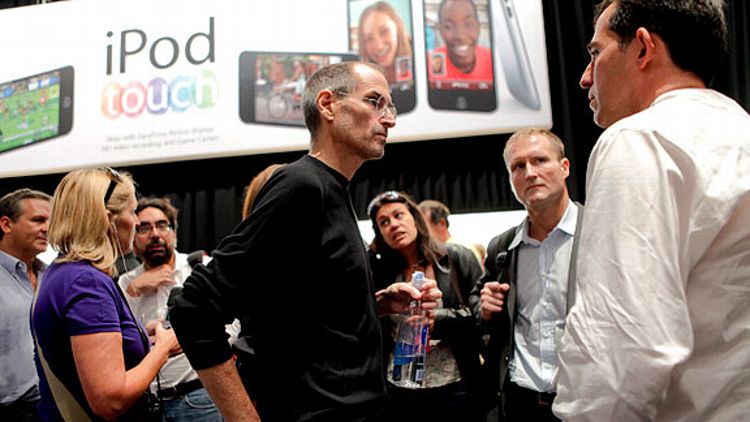 In my awkward but passionate youth, I inhaled the numbers and statistics, subscribed to the fanatic magazines, and — along with tens of thousands of other die-hards — attended all the big events. I snapped up what gear I could afford with my babysitting earnings then asked Santa for the rest. I fretted about strategic missteps, dissected rumors, and distrusted my rivals and (for a while) my own front office in equal measure. I tried to lure my friends in (“Seriously, this new lineup’s going to be amazing.”) and then, years later, I felt mildly irritated by their sudden shared enthusiasm. They didn’t know the history, they hadn’t been there through the darkest years, so they couldn’t possibly understand what it really meant to cheer for Apple.

(I also liked the Knicks and Rangers.)

If that all sounds a little selfish, a little mildly unhinged — well, that’s kind of what it is to be a fan of any franchise. And if there’s any company that has engendered the same blind and unyielding loyalty to itself as, say, the Chicago Blackhawks or Philadelphia Phillies, it’s the one that Steve Jobs cofounded in 1976, quit in 1985, rescued in 1997, and has been transforming, and transcending, ever since. Which is why, when Jobs announced his resignation as CEO on Wednesday, we Apple fans reacted like we’d just lost our MVP.

Taking Stock: A Look at the New York Giants’ Crash

Apple’s roller-coaster trajectory has long resembled that of a professional sports team. (The company developed its products through the years with the same varying success of a franchise developing its prospects. That first iPod? Derek Jeter. But the Newton? Ryan Leaf.) There were the glory days that took place when I was still a toddler, yet they retained enough importance and allure to draw me close — just in time for that dismal era marked by management infighting and rudderless direction. There was the looming and near-certain threat of some unhappy merger, the corporate equivalent to dreaded relocation. And then, improbably, there was the turning point that sparked a decade and counting of ascendency — earlier this month, Apple even ticked past market giant Exxon to briefly reign as the world’s most valuable company — and attracted, as these things do, front-running (if well-intentioned) fans.

Jobs’ announced departure came at the same time the sports world dabbed its eyes over the University of Tennessee women’s basketball coach Pat Summitt’s diagnosis of early onset dementia, and swirled with reports that Theo Epstein might leave the Red Sox for Chicago. (Epstein, like Jobs, once quit before returning.) Both Summitt and Epstein were so crucial in shaping the success of their respective organizations that, particularly in Summitt’s case, they have become their programs, leaving visions of their eventual absence blurry at best. Jobs has all of Summitt’s steel and Epstein’s wonkery and, while we’re at it, Pat Riley’s mystique, John Stockton’s vision, Phil Jackson’s dickish charm, Mike Keenan’s temper, George Steinbrenner’s control-freakishness … the list goes on and on. If Apple really were a team, Jobs would be its owner, GM, coach, PR guy, and trainer — and he also would have founded the franchise after helping invent the whole damn sport.

In 1997, shortly before unveiling Apple’s “Think Different” ad campaign (as hallowed among the Apple faithful as the Green Monster is at Fenway), a newly reinstalled Jobs invoked his biggest corporate role model. “Remember, Nike sells a commodity,” he said. “They sell shoes! And yet when you think of Nike, you feel something different than ‘it’s a shoe company.'” Sports fans feel the same way about their teams: It’s not just football, it’s the Packers! Vince Lombardi! Lambeau Field! It might seem silly, but it still feels vital, and sometimes that’s the only thing you need.

Apple doesn’t just feel vital; the company has, time and again, legitimately shaped the course of history. But there I go with the sportswriterly hyperbole. Tech writers, on the other hand, often dismiss Apple devotees as crazy, howling fanboys. Like any Oakland Raiders or Duke Blue Devils supporter worth his or her salt, though, I’ve never taken that word to be an insult. It’s precisely what we are.