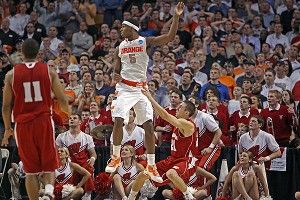 When Fab Melo, Syracuse’s starting center, was declared ineligible for the NCAA tournament for undisclosed academic reasons, the potential for humiliation was high. Would the Orange be the first 1-seed to topple in the opening round? If not, Kansas State’s horde of rebounders would pillage the offensive glass. And barring that, Wisconsin’s patience and perimeter shooting would give them fits. Syracuse was every expert’s upset special, a wounded moose waiting to be brought down by a pack of sharp-ribbed wolves.

And yet, after three wins, Syracuse has escaped indignity. Two of their victories were unimpressive, but at this time of year, brushes with death are immediately forgiven and forgotten. They are now in the Elite Eight. Missouri, Duke, and Michigan State are not. Without particularly playing well, the Orange have already accomplished more than many people anticipated. Respect the power of lowered expectations and the petal-strewn path of the top seed.

Still, for Syracuse fans, Thursday night’s 64-63 victory over the Badgers was like being trapped in a car slowly filling with water.

Wisconsin, the 4-seed in the East Region, was not an opponent that boasted imposing size, athleticism, or talent. But the Badgers were feared nonetheless. Over the years, they have earned a reputation as a tough out, due to their numbingly patient approach to offense. If you take smart shots and knock down some timely 3s, you can linger around long enough to make things way more interesting than you should.

The Badgers are traditionally overachievers, but they are rarely lovable. The team atones for their physical failings with unshakable faith in a sect of basketball asceticism that emphasizes self-denial. Individualistic pleasures such as dribbling the basketball or creating on the fly are sins. Players must resist the urge to take undisciplined shots, even as the shot clock withers to single digits. It is not joyful. Wisconsin coach Bo Ryan has the name, look, and demeanor of a hard-nosed sheriff, and he keeps an orderly house.

Even when Wisconsin doesn’t score, its suffocating fortitude saps the game of all fluidity. Each possession becomes far too precious a commodity to squander with a risky baseball pass or frivolous lob. To Syracuse, the concept of treasuring each possession is foreign. They indulge in reckless shots and sloppy passes because their stretchy zone defense encourages opponents to slip into the same chaos. The Orange are best suited for a frothing Andrew W.K. keg party with lots of spillage. Wisconsin insisted on a wine tasting.

Thursday’s game, which was immensely entertaining, unfolded with refreshing predictability. Syracuse did not unveil a polished half-court offense. Wisconsin did not transform into a fast-break team. As expected, the Orange went on scoring runs when they jumped into transition and used superior individual talent to beat defenders off the dribble. And the Badgers responded with endless horizontal passing and accurate 3-point shooting. (During the second half, they drained six in a row.) It was one of those deliciously hackneyed horror movies where the girl trips over a gnarled tree root and the zombie reanimates one final and terrifying time. Really good stuff.

In cinematic fashion, C.J. Fair played the role of the bullied weakling who rises to the occasion and blows off the undead creature’s face with an antique shotgun. After shooting 2-of-17 over the previous four games and averaging only 15 minutes per contest in the tournament, he exploded with 15 points on 7-of-9 shooting, seven rebounds and four steals. He’s the only player on the Orange capable of scoring in the paint, and his return to early-season form was the major reason Syracuse was able to shoot 55 percent against a team that is rarely so generous.

More worrisome was the dismal performance of Kris Joseph, the senior who has been absolutely wretched during the postseason. Including the Big East tournament, he’s shot 10-for-38 from the field and 3-for-15 from long distance. Thursday night, he contributed only seven points and two rebounds while failing to notch an assist, steal, or block. Even worse was the panicked expression plastered across his face before he missed the front end of the critical one-and-one that gave the Badgers a chance to win at the buzzer. Joseph is a gifted scorer who should be destroying the pedestrian defenders on teams like Wisconsin, but he’s devolved into a frightened Canadian field mouse before our eyes.

Still, Syracuse survives. They will again be expected to lose, for even more legitimate reasons this time, against the Ohio State Buckeyes. The Orange possess no good answer for stifling Deshaun Thomas, let alone Jared Sullinger. Nettlesome defender Aaron Craft will be in Scoop Jardine’s and Brandon Triche’s pockets all day. Blah, blah, blah. It just doesn’t make sense to bet against the Orange at this point. They were supposed to be the whale, but now they’re playing with house money.