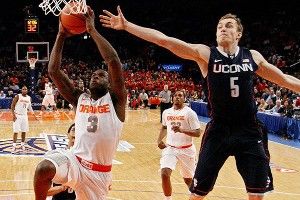 Before the season began, Syracuse and UConn were deemed two of the finest teams in the land. Since then, fate has flung the two powerhouse programs in very different, but equally chaotic, directions.

Coming into Thursday’s meeting in the Big East tournament, Syracuse had experienced a charmed season — on the hardwood, at least — befitting a Rothschild heir. They were ranked second in the country, had lost only once in 32 games, and were assured of entering the NCAA tournament as a top seed. The Orange are one of the few teams that wouldn’t be considered delicious ewes against the cohort of lottery picks presently devouring livestock in Lexington.

But things got complicated in Upstate New York. It’s impossible to say if the allegations against Syracuse assistant coach Bernie Fine were amplified or muffled by the horror-show playing out in State College, Pennsylvania, but fallout from the scandal left coach Jim Boeheim and the university looking like insensitive fools.

As the Orange racked up victories, off-court imbroglios amassed: Fine’s wife was rumored to have been screwing players, center Fab Melo was suspended for academic tomfoolery, and, most recently, the program was accused of covering up positive drug tests from basketball players. It’s surprising that Scoop Jardine’s erratic play wasn’t fingered as the culprit for the mass hysteria in LeRoy.

UConn has seen its share of turmoil, too. Coach Jim Calhoun was suspended for three Big East games earlier this season as punishment for recruitment violations. He also missed most of February because of spinal stenosis, and had part of a disk surgically removed last week. And the Huskies haven’t been particularly good; coming into the tournament, their conference record was a mediocre 8-10.

In what could be the final year of the Big East in familiar form, Syracuse and UConn have clashed three times within the last month. The gulf between their early-season performances undercut the importance of the two regular-season games, but at last, in Madison Square Garden, there was finally something to play for. You guessed it: history.

Three years ago, Syracuse defeated UConn in a six-overtime war of attrition that provided such timeless moments as Eric Devendorf mounting the scorer’s table. Last season, the Orange and Huskies met in the semifinals of the Big East tournament, and their fortunes diverged dramatically from that intersection. Shortly after being ransacked by Kemba Walker’s 33 points and 12 rebounds, Syracuse made an early exit from the NCAA tournament. It was a dismal end to a promising season of overachievement. UConn, as we all know, used the game as a springboard that launched the team toward a national title.

Although MSG is technically a “neutral” site, the crowd was probably close to 80 percent Syracuse supporters. Maybe their orange T-shirts just stood out. Former players were abundant: besides Gerry McNamara, now an assistant coach with the team, Derrick Coleman, John Wallace, and Paul Harris were on hand, vociferously rooting for the Orange. Still, there were enough UConn devotees to roar impressively when Jeremy Lamb hit a 3-pointer to chop the Syracuse lead down to 25-24 with a little over a minute left in the first half.

Midway through the second half, a titanic dunk from freshman Andre Drummond sent the UConn student section into snake-handler convulsions and inspired Syracuse to burn a timeout. A betting man would wager the freshman center leaves the Huskies after this season. (After all, his college enrollment was an eleventh-hour surprise to begin with.) And he should.

Drummond is one of those big guys who instinctually tries to dunk everything, as if it ramming the ball through the hoop violently counts double. Coaches spend years attempting to drill this mentality into the mushy brain of pivot players, and he seems born with it. In a few years, Drummond might be regarded as the antipode of Hasheem Thabeet: a relatively forgettable collegiate player who excels at the professional level.

Another genetic trait you pray your center possesses is immunity against the temptation of open jumpers. It’s like putting a tub of lemon pepper wings in front of Ricky Rozay; seizures be damned, those crispy poultry fragments are going down his gullet.

With around four minutes to play, Melo was offered an irresistible look from the top of the key. The crowd sensed his weakness and shrieked in discouragement, but the opportunity for heroism proved too intoxicating. His shot clunked dismally off the side of the rim like a dead pheasant and dropped out of bounds. Boeheim fluttered his fistfuls of paper in a cartoonish rage on the sideline, but Syracuse fans cackled with rueful laughter. Sometimes nature trumps nurture, and that’s just how it goes.

In person, Melo is so big that he engulfs the sun. That description applies to most 7-footers without the reedy structure of an Yves Saint Laurent model, but his long arms, willingness to take charges and awkward athleticism give him an ability to gobble up space that eludes even fellow giants like Drummond and Rakeem Christmas. Melo contests every shot taken within a turnip farm’s distance of the lane, and does it violently.

Melo’s efforts aside, one could sense phantoms of last year stirring in the Garden rafters as the Huskies strung together a 39-31 lead. The Spirit of Kemba was rustling. With Kris Joseph mired in a 1-for-8 afternoon, Jardine mired in a 1-for-6 afternoon, and C.J. Fair mired in an 0-for-4 afternoon, things appeared bleak for the Orange.

When Syracuse struggles on offense, it’s almost always because they’re trapped in the rigidity of their unimaginative half-court offense. There’s not a single back-to-the-basket post threat on the roster, and most of the team’s talented offensive players will occasionally resort to chucking up perimeter shots. The Orange have entitlement issues, too; if things aren’t going their way, they gripe to the officials and bark at each other.

But the Orange roll deep, and Boeheim has few compunctions about rewarding bench players with playing time based on their immediate performance. Fair and Jardine were deservedly exiled to the pine, and their replacements were exceptional. Dion Waiters scored 18 points on 11 shots, including an obnoxiously deliberate bucket following a quick crossover that sent the defender, Ryan Boatright, stumbling backward. Later, he found James Southerland on the baseline for a crucial jumper.

In the closing moments, when victory for the Orange was assured, former Syracuse players started yelling toward the bench. “We love you, Scoop!” one shouted. “Even when you’re not playing!” It’s difficult to believe that next year, at Madison Square Garden, a new chapter will begin.