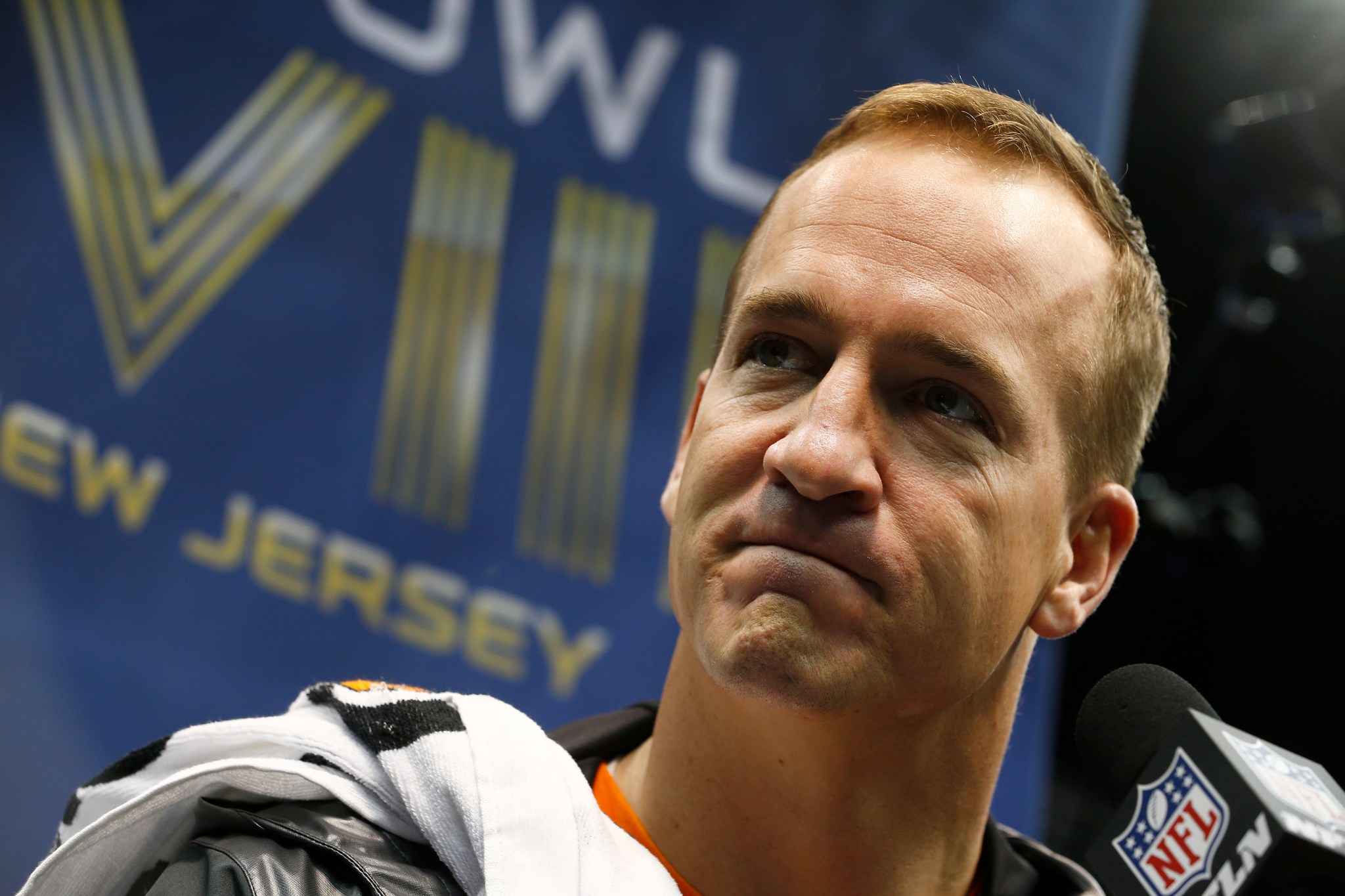 “I’ve been being asked about my legacy since I was about 25 years old,” Peyton Manning said earlier this week. “Which I’m not sure you can have a legacy when you are 25 years old or even 37. I thought you had to be 70 to have a legacy. I’m not 100 percent sure what the word even means.”

I’m not sure anyone really does, but that isn’t going to stop us from talking about it.

For Manning and everyone else, the Super Bowl is where those legacies, legends, whatever you want to call them, come to be. Nowhere in football is there more to be lost or gained than Sunday in New Jersey, and with that in mind, we’re continuing our playoffs-long look at who has the most at stake.

In several ways, Russell Wilson has already won. Super Bowl week is always filled with stories about how the competing teams were built, and each one of those pieces about the Seahawks has to mention Wilson in the first two sentences. His $526,000 salary provides Seattle with more disposable funds than anyone. Cliff Avril and Michael Bennett are NFL vacation homes — not necessary, but a lot of fun if you’ve got the money. Seattle has done a great job overall in assembling its team, but Wilson’s deal is what makes a lot of that possible. We will be reminded of that plenty in the next five days.

The Seahawks’ pool of young, cheap talent and resources also makes this Super Bowl trip less of a make-or-break experience for Wilson. This team is set up to win for a while; Wilson doesn’t need to win. Even if Seattle’s passing game is what brings down the Seahawks on Sunday, all anyone is going to be talking about is Peyton.

Speaking of which! The perfect season for Manning to further establish his legend would go something like the this one. He would break the records set by one quarterback who beat him in a Super Bowl and another who kept him from two others, hammer Bill Belichick and the Patriots in the AFC Championship Game, and finally, dismantle one of the best pass defenses in NFL history. For both the Broncos and Manning, this was a Super Bowl–or-bust season, but this is the scenario in which he has the most to gain. If Denver wins on Sunday, no one would have anything else negative to say about Peyton Manning, the football player.

Every Super Bowl has its unlikely hero, and don’t ask why, but I have a hunch one of these two might be the guy. Both have shown a knack for making memorable plays this season, and the areas they occupy on the field make them ideal candidates for a game-swinging pick-six or fumble return. Even if it’s not something that significant, the Broncos’ tendency to attack the middle of the field on offense should mean Chancellor has at least a couple chances at doing to someone else what he did to Vernon Davis last week.

The (relative) downside to coaching a team quarterbacked by Peyton Manning is that the credit you get for any success goes only so far. This is John Fox’s second Super Bowl, a decade removed from his first, when he took an average Carolina team and nearly beat Belichick’s Patriots.

Denver has lost almost half its defensive starters (Derek Wolfe, Kevin Vickerson, Von Miller, Chris Harris, Rahim Moore) to injury this year, but even if Fox and Jack Del Rio scrape together a game plan that stifles the Seahawks’ offense, a Broncos win is still about Manning first, and everyone else a distance second. The Broncos’ defense has been a problem for most of the season, but through two playoff games, they’ve held the third- and fourth-ranked offenses by DVOA to a combined 33 points. If you limit that to the first three quarters of each game, it’s three points — three!

Fox has been through so much in his own life this season, and through it all he’s managed to hold this defense together with duct tape. It’s a shame that, even with a win, it’s unlikely he will get the credit he probably deserves.

Pete Carroll is different things to different people. To those of us who were in sixth grade when he was fired by the Patriots, he’s the man who rebuilt USC into a college football power. Memories of him in New England or being the fourth choice on the Trojans’ list are hazy; memories of him as head coach of the Jets are nonexistent.

Regardless of whether you thought of Carroll as a college coach or an NFL flameout, you likely doubted how good he would be in Seattle. Even supporters of the job Carroll did at USC had reservations about whether what made him successful there could translate to the pros. Yet all Carroll has done since getting back to the NFL is prove anyone who doubted him — for any reason — wrong. That he mans probably the deepest, most talented defense in the league helps, but there’s no denying that Carroll’s approach has defined what the Seahawks have become.

It’s a common misconception that Richard Sherman will be assigned to Denver’s best receiver. Sherman plays almost exclusively on the offense’s right. That being said, there should be at least a few chances for Thomas to challenge the league’s best cornerback.

In the past two seasons, only Calvin Johnson and Andre Johnson have more receiving yards than Thomas’s 2,864, and only Dez Bryant and Jimmy Graham have caught more touchdowns than his 24. Still, playing with Peyton Manning will always mean that the credit Thomas gets will come with a qualifier. At 26, he’s one of the best young receivers in football, and against Sherman and that Seahawks secondary, he has a chance to prove it.

Bill Barnwell wrote in detail about Lynch’s past, present, and future earlier today, but in short, it’s safe to say that Beast Mode’s path to this game has been a fascinating one. He went from first-round bust to off-field headache to NFL star, and he’s built a fervent following, based on a combination of Skittles, a vow of media silence, and one of the most violent, indignant running styles any back has had in the past 20 years.

His presence and his play have been enough to turn him into a cult figure. Usually quarterbacks are the favorites to win the Super Bowl MVP award, but would you really bet against this guy right now?

Again, I’d direct you elsewhere for the full story on what this week means to Champ Bailey, as wonderfully told by ESPN.com’s Elizabeth Merrill. But let’s talk about a bit about Champ.

Last season’s Super Bowl was defined in part by the Ray Lewis cloud that hung over it. Unlike Lewis, Champ Bailey hasn’t given advance notice that this season is his last, but we’d might as well treat it as such. We’d probably regret not giving him the same type of sendoff. Go take a look at the “Similar Players” section of Bailey’s Pro-Football-Reference page: Mike Haynes, Night Train Lane, Mel Blount, Ronnie Lott, Roger Wehrli, Deion Sanders. Bailey’s wait for the Hall of Fame, as maybe the best cornerback of his generation, will be short, and Sunday will be a chance to add what has already been a historically great career.

Bailey is nowhere near the player he was — but neither was Ray Lewis. Even as a bit player in a championship run, there’s still something to a figure like that ending his career with a win in the Super Bowl. And the best part is that for Bailey, it would be his first.

I loved watching Bennett with the Bucs, so much so that after getting just a one-year, $5 million deal with Seattle, I wrote about him being one of the league’s most underappreciated players. I’ll save the line-nerd talk, but in short, Michael Bennett can really play.

As someone who goes out of his way to watch Bennett, it seems to me like he’s already made his money. His performances within the Seahawks’ terrifying defense have been more than enough to get him a sizable contract, with Seattle or elsewhere. Still, many don’t know his name.

The Super Bowl stage, against Peyton Manning, is one last chance for Bennett to solidify all that before the free-agency push begins. There’s a history of players from championship teams getting severely overpaid when they hit the market (see Dannell Ellerbe and Paul Kruger for the most recent examples), and considering what he’s actually worth, an overpay for Bennett would be a hell of a lot of money.

Schneider’s reputation, as it relates to this week, is almost entirely tired to Wilson’s. The Seahawks drafted Wilson because of Schneider, and that pick (along with Richard Sherman and his similarly tiny price tag) has allowed Seattle to build maybe the most talented roster in the league. His job is done. If the Seahawks lose on Sunday, it won’t be because they didn’t have enough to win. If they win, Schneider will have earned his place among the best executives in sports.

He’s John Freaking Elway. Sure, it would be a “huge feather,” but it’s hard to believe Elway’s legend could grow any larger than it already is in Denver. But on a larger scale, his convincing Peyton Manning to live in the mountains could be what makes Elway football’s version of Jerry West. Manning’s time left in the league is obviously limited, but Elway has made his share of other moves to make this Broncos roster one very capable of winning a Super Bowl. It’s not half bad for a guy who claimed he didn’t know what he was doing.

"He's a brilliant mind, obviously," Peterson said of Turner, adding that he has heard positive reviews on new coach Mike Zimmer as well. "I'm still sitting back and seeing whatever moves we make as far as coaches and players."