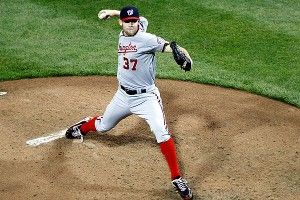 Earlier this week, ESPN SweetSpot writer David Schoenfield declared fully recovered White Sox pitcher Jake Peavy the game’s best hurler. Peavy’s comeback, from two-time ERA champ to desperately dangling limb and now back to a batter-baffling force, has been remarkable and was never a given. But as good as Peavy’s been, overwhelming hitters with his four-pitch repertoire, he isn’t a guy who haunts the nightmares of his opponents. Stephen Strasburg, well, he’s another story.

Thursday night, Strasburg won his third game of the season, striking out 13 Pirates in six innings of work with a biting fastball running to 97 miles per hour, a changeup that danced around 90, and a diving, heavy sinker that appeared to be made of that stuff they used to make Thor’s hammer. Granted, the Pirates are still the Pirates. (Strasburg struck out 14 of ’em in his first-ever MLB start in June 2010.) This one lowered Strasburg’s ERA to 1.64, pushed him to the top of the strikeouts leader board and left him at 2.1 WAR for the season. That’s third-best in the National League, behind Michael Bourn (who won’t keep this pace) and Reds pitcher Johnny Cueto (who might).

In 2010, during Strasburg’s ballyhooed introduction, he confounded hitters and umpires, too. But his momentum was felled sadly and swiftly by an August 2010 Tommy John surgery. Since then, the Nationals have played things very safe with Stras. Thursday was just the third time in his major league career he tossed more than 100 pitches. In 24 career starts, he’s never made it into the eighth inning. And until he learns to more efficiently manage his pitch counts, always a challenge for a bat misser, he’ll struggle to go deep into games.

Still, all seven games he’s pitched this season have been quality starts and the Nats find themselves at the top of the identity-shifting NL East. As a team, they’ve surrendered just 93 runs in 31 games, putting them on pace for one of the stingiest seasons ever — the 1968 Cardinals, who gave up just 472, own the record. The really good news: Four-fifths of the Nationals staff are under 27 years old. (Old-ass Edwin Jackson is 28.) Strasburg is the baby of the bunch, but also the leader and unquestioned ace. The inevitably underrated Jordan Zimmerman has a Smoltz-ian no. 2 air about him. Strasburg gets another gift next week when he squares off against the San Diego Padres, who are enjoying one of those seasons everyone wishes never happened and would just die in a fire already. (Rare bright spot Cory Luebke is waiting to hear whether he’ll need elbow surgery that would end his season. Fun.)

What Strasburg needs next is to grow. Seize the opportunity against a limp offense to toss his first complete-game shutout. Dazzle us with an afternoon stunner. Challenge Kerry Wood’s 20 Ks. Hell, shut down an offense full stop, 27 in a row. So it was written, let it be told. Every day should be Strasmas.

The Truth, the Whole Truth, and Nothing But the Truth