The Truth, the Whole Truth, and Nothing But the Truth 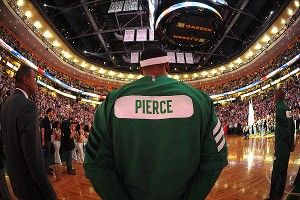 After Paul Pierce single-handedly won Game 2 of the Atlanta series, a friend of mine e-mailed, “Has there ever been anyone quite like Pierce?”

The short answer: No.

Even the biggest Celtics homer wouldn’t compare Pierce and Kobe, not when Kobe is already one of the eight best players ever, a superior scorer and a consistently better two-way player. But from a longevity/durability/numbers standpoint? It’s not so far-fetched. In 14 years, Pierce played 1,025 of a possible 1,100 games, and that includes the 2006-07 season, when Pierce missed 35 games (about 20-22 more than needed) because Boston was tanking for the Oden/Durant lottery. A few weeks before the 2000-01 season, gangbangers nearly stabbed him to death and he somehow played all 82 games. In 2003, Pierce got crunched by Amar’e Stoudemire, broke two teeth, spent the next day getting oral surgery and somehow played the next game. He’s just a gritty mf’er, one of the toughest Celtics ever … and yeah, I know I’m opening myself up to dozens of wheelchair e-mails from the Los Angeles area.

Quick tangent: When I was growing up, Celtics fans revered John Havlicek for his legendary durability — by the time Hondo retired in 1978, he’d played a then-record 16 seasons, logged a then-record 46,471 minutes and scored a then-incredible 26,395 points. These numbers had no correlation with anything that had happened in NBA history — which, at that point, was only 32 years old and featured crummy sneakers, bad dieting, coach flights, smoking, poor medical care and everything else that lent itself to short careers. So the thought of another Celtic casually leapfrogging every Havlicek career benchmark would have been staggering in the late-1970s, even if it’s not as staggering now. By the time Pierce’s career wraps up, we’ll remember him as the fourth greatest Celtic behind Russell, Bird and Hondo (in that order). There’s just no way around it.

Pierce’s career stands out for two other reasons. First, his size (6-foot-6, with some bulk) and speed (deceptive) allow him to play either wing spot and defend anyone from prototypical two guards (say, Kobe) to bigger two guards (say, Joe Johnson) to pure small forwards (say, Rudy Gay) to inside/outside forwards (say, Carmelo). You can play small ball and stick Pierce at the four if you want, and if you need to run your offense through him as a point forward, he can pull that off, too. On the “The Best 50 Players Ever” list (and he’s on it, in the low-40s and climbing), only Havlicek and Scottie Pippen gave their teams the flexibility that Pierce provided Boston these past 14 years. You can’t discuss Pierce historically without mentioning that. You can throw any four players next to him — as long as one could rebound and another could defend point guards — and fill in the blanks from there regardless of what their skills were. In Game 2 last week, Boston beat the Hawks with Kevin Garnett, Avery Bradley and a bunch of jump shooters and clumsy bangers while running their entire offense through their small forward (Pierce). Ask New York fans — that’s even more difficult than it sounds.

Second, I’ve been watching Pierce for 14 years now … even if there were times when you may have said, “He’s probably one of the best 10 players right now” (specifically: 2002, 2007 and 2009), you never would have called him great or anything. But here’s the crucial wrinkle: He’s a very good player who can, occasionally, be great.

How many guys have qualified for that specific statement? Let’s see … Sam Jones, Walt Frazier, James Worthy, Manu Ginobili, Dennis Johnson, Reggie Miller, Tony Parker, maybe Pau Gasol, maybe Chauncey Billups and two guys I know I’m forgetting. Either way, it’s not a long list, and Pierce has already had a better beginning-to-end career than any retired guy on it. He’s proven that, in any seven-game playoff series, Pierce will become the best player on the floor for two or three of those games. It’s not an effort thing; you never watch him saying, “Wow, Paul is really trying tonight!” And it’s not a streakiness thing; he doesn’t catch fire the same way that, say, Kobe does. It’s something you can see within the first few minutes. You just kind of know.

Uh-oh, Paul is feeling it tonight.

After Boston beat the Clippers in Los Angeles two months ago, here’s how I described that dynamic: “Whenever the team is locked in, and he knows it, (Pierce) starts carrying himself a little differently. Puffs his chest out, turns to his bench after baskets to feed off their reactions, struts around during stoppages doing his ‘nodding and staring down the crowd’ routine. Puts his swagger suit on, basically. His backbreaking 3 with 2:47 remaining didn’t surprise me in the least, nor did his reaction afterward — the slow jog backward, the prolonged stare at his bench, the nodding that always comes with it.”

That exact scenario happened in Game 2, when Pierce knew Boston wasn’t winning in Atlanta without Rajon Rondo and Ray Allen unless he had a great game. Not a very good game … a great game. And then he had one, which was what made it so great. At some point that night, every true Celtics fan knew Pierce’s dagger 3/slow job/nodding/stare combo was coming — I would have bet my life on it — and with about three minutes to go, it finally happened, right on cue. Maybe we need to redefine the word “great” a little bit — when you’ve been watching someone for long enough that you know they’re coming through, and then it happens in the exact way you expected, isn’t that a form of greatness?

Of course, it’s not officially a fun Paul Pierce postseason until he’s playing hurt. Pierce tweaked his knee during a Sunday walk-around, then exacerbated it during that night’s Game 4 and sprained his MCL. Random coincidence: I sprained my MCL last summer playing hoops, didn’t realize it and played a couple more times before realizing something was seriously wrong. (I thought I had just tweaked it.) What’s weird about sprained MCLs is that you can play at about 70 percent speed (as long as you have a brace), but you’re always thinking about it, you can’t plant hard on it, you can’t really move laterally, and you’re constantly worried your knee might cave on you. The only way it heals? By resting and not playing. (Which is what I eventually did. And by the way, I’m older and significantly less athletic than Pierce, to say the least.) Of course, Pierce didn’t have that luxury, so he played at 70 percent in Game 5 (air balling the potential winning shot) and 70 percent in Game 6, if only because 70 percent of Paul Pierce is better than 300 percent of Marquis Daniels or Sasha Pavlovic.

Which is what made the following moment so great …

Trailing by three in the final 90 seconds of Game 6, with a petrifying Game 7 in Atlanta looming, Pierce (trapped in the left corner) rolled the dice for one play, drove hard along the baseline to the basket, up-faked Johnson and somehow willed the ball through the hoop, keeping Boston alive and setting up everything that happened next (Josh Smith’s horrific 20-footer, Kevin Garnett’s winning basket, Al Horford’s missed free throw and a textbook Celtics escape).

We’ll remember Game 6 for Kevin Garnett’s vintage KG performance, and maybe even for Josh Smith turning into Josh Smith at the worst possible time. Just don’t forget that Pierce layup. It was a great play by a very good player, the kind of moment that sets him apart from just about everybody who ever played basketball for a living. I will remember watching you, Paul Pierce.