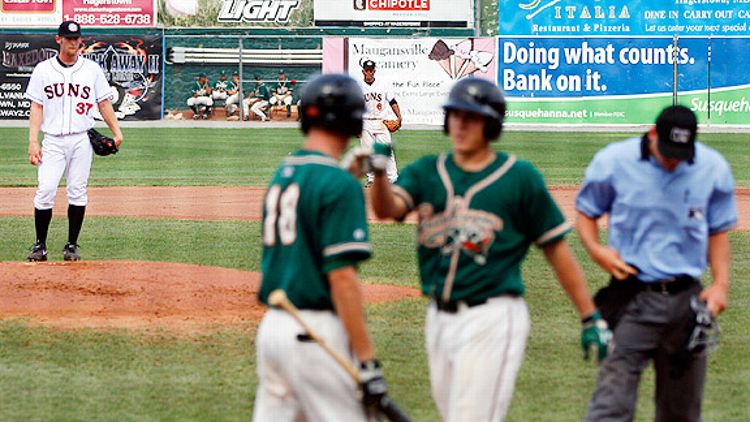 It’s August in Washington, D.C., which typically means two things: It is stink-hot and the Redskins have not yet had a chance to underperform. This year, just like all the others, it’s stifling outside — I stink — and the Redskins haven’t named a starter at QB. (‘Tho, you know, what if Sexy Rexy Grossman can channel his 2006 self … and Ryan Torain can stay healthy all season … and … oh, goddammit, I’m doing it again.)

But Sunday delivered an altogether atypical experience for a D.C. sports fan — particularly one who roots for the local professional baseball team — and it had nothing to do with Jayson Werth actually getting a big hit in a big moment. No, what made Sunday special was an awesome 1⅔ innings in a baseball game in Hagerstown, Md.

The line on Stephen Strasburg’s first rehab start for the Hagerstown Suns ran all night on ESPN’s ticker, so the numbers are notorious, but also for the most part irrelevant (although I kind of dig the 31 pitches/25 strikes). The 65 credentialed members of the media were there to get a live progress report on Strasburg’s rehab, which they received (in spite of the dumb 400-word code of conduct advisory issued by the team).

But what I, the Washington baseball fan, wanted — in addition to an update on the progress — was a modest, gentle rekindling of hope. Consider me lit.

Yes, yes, of course this was but a small glimpse into a rehab moment for a guy who still has a long way to go before he’s back (It typically takes at least 12 to 18 months to heal from Tommy John surgery, which means we’re still a good six-plus months away from any kind of all-clear). But what’s at stake with Strassy’s comeback isn’t just the recovery of a single player. Along with his elbow is the trajectory of the entire Nats franchise, not to mention the next five to 10 years of my baseball life. When them’s the stakes, you ponder things like, “Will the Strasburg story be like that of Pedro (minus the little person) or Roger (minus the doofus narcissism), or is he going to be the next Prior/Wood-esque what-could-have-been-great phenom?” And that is why Sunday was so compelling and uplifting and soft-thrilling. If Strasburg really is healthy at the start of next season, the Nats matter.

Which brings me to the collective cognitive dissonance of the Washington area at the moment. There’s a certain amount of patience and perspective expected of the sensible adult sports fan, while maintaining an ever-vigilant sight of the big picture. Which is why I won’t deny that I don’t have a rational rebuttal to the point Rob Dibble made last week (this is the first time I’ve ever strung those words together) in regards to the folly of forcing a Strassy return this season.

In fact, the irrational, insatiable, please-can-I-have-a-little-taste-I-promise-not-to-eat-the-whole-thing-JUST-GIVE-ME-A-DAMN-BITE fan-self wants to see Strasmas in September with my own two eyes. But that’s why Sunday’s stint was so important, because it brought back the potential of hope. Giving me, and all of the other D.C. sports fans out there, the exuberance of what next season might hold, but also a diversion (at least for a moment) from the annual soul-sucking self-loathing that’s necessary to call oneself a Redskins fan.

Filed Under: MLB, Nothing to See Here, Stephen Strasburg, The Future, Washington Nationals