I feel bad for Rickie Fowler. Last week, he spent the opening round of the U.S. Open in knickerbockers — white, pleated ones. The Easter-egg blue in his argyle socks went with the mini checks in his golf shirt. Payne Stewart was on his mind, he said, and that outfit was the result. It should go without saying that Stewart would never have worn most of what Fowler did, especially that white baseball cap with the hideous orange Cobra logo. Fowler matched. Stewart accessorized. 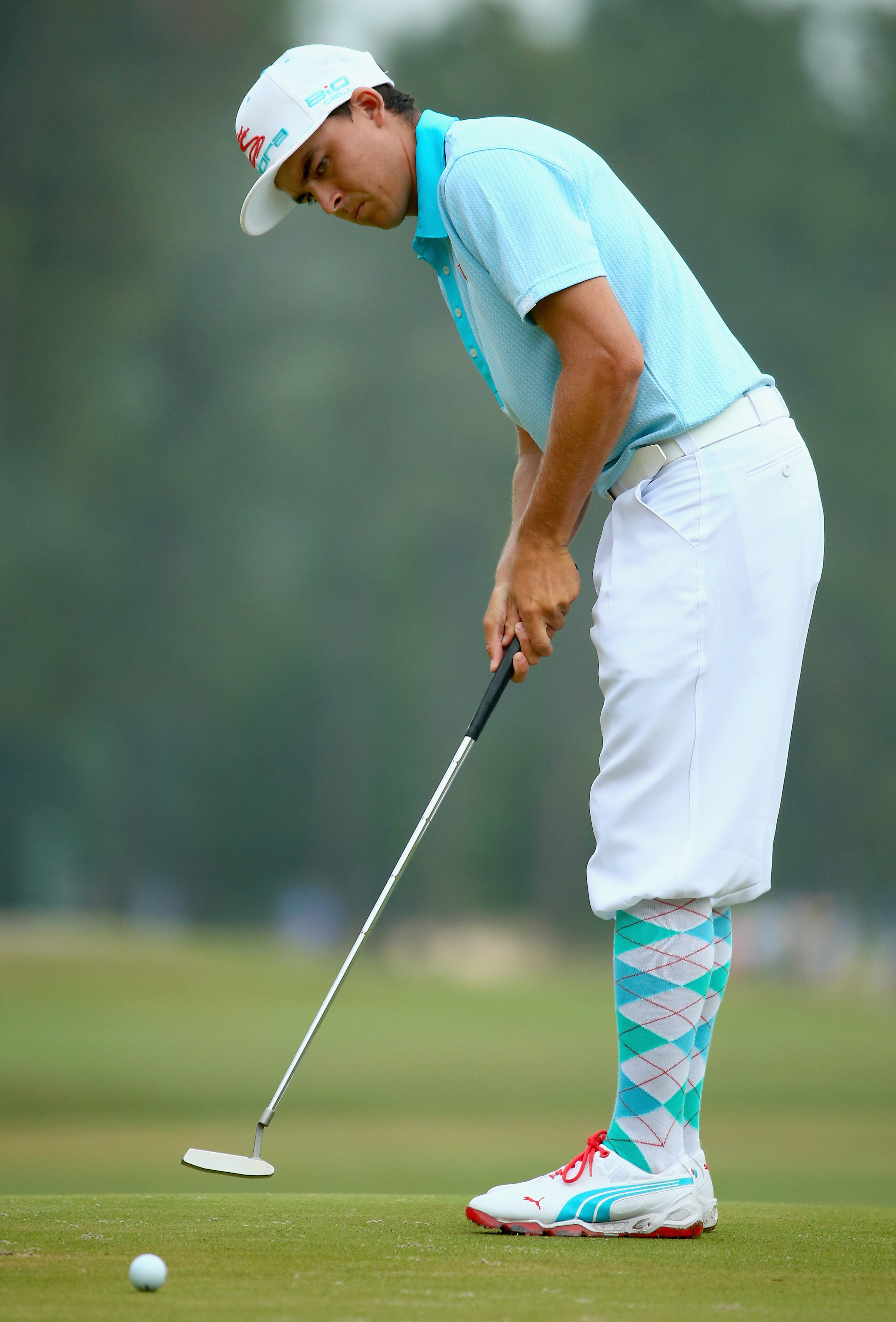 In 2014, a man in knickers creates a ripple of newsworthiness. Stewart’s 1990s throwback was just about the most fun an athlete has seemed in clothes. Fowler understands the difference between his usual flashy embarrassments and Stewart’s — the old man took a lot of risks. Fowler wears a lot of orange. His tribute, such as it was, meant well. Who else on the PGA Tour would have even tried? But Fowler looks at Stewart and just sees knee pants, which is like looking at the Eiffel Tower and seeing four concrete bases.

The reason to feel bad for Rickie Fowler is not his getup. It’s the World Cup. Who has time to get worked up about his bland fashion-forwardness when there’s a real chance that for a month men will be kicking balls in mismatched cleats? The cleats are Puma’s. The left one’s blue — Fowler blue, actually! — the right is pink. And they make sense with nearly every uniform to take the field. Lots of players have them on (Cesc! Balotelli!), but they stood out on Antoine Griezmann, the young French attacker, who handles the ball as if it were Ginger Rogers. 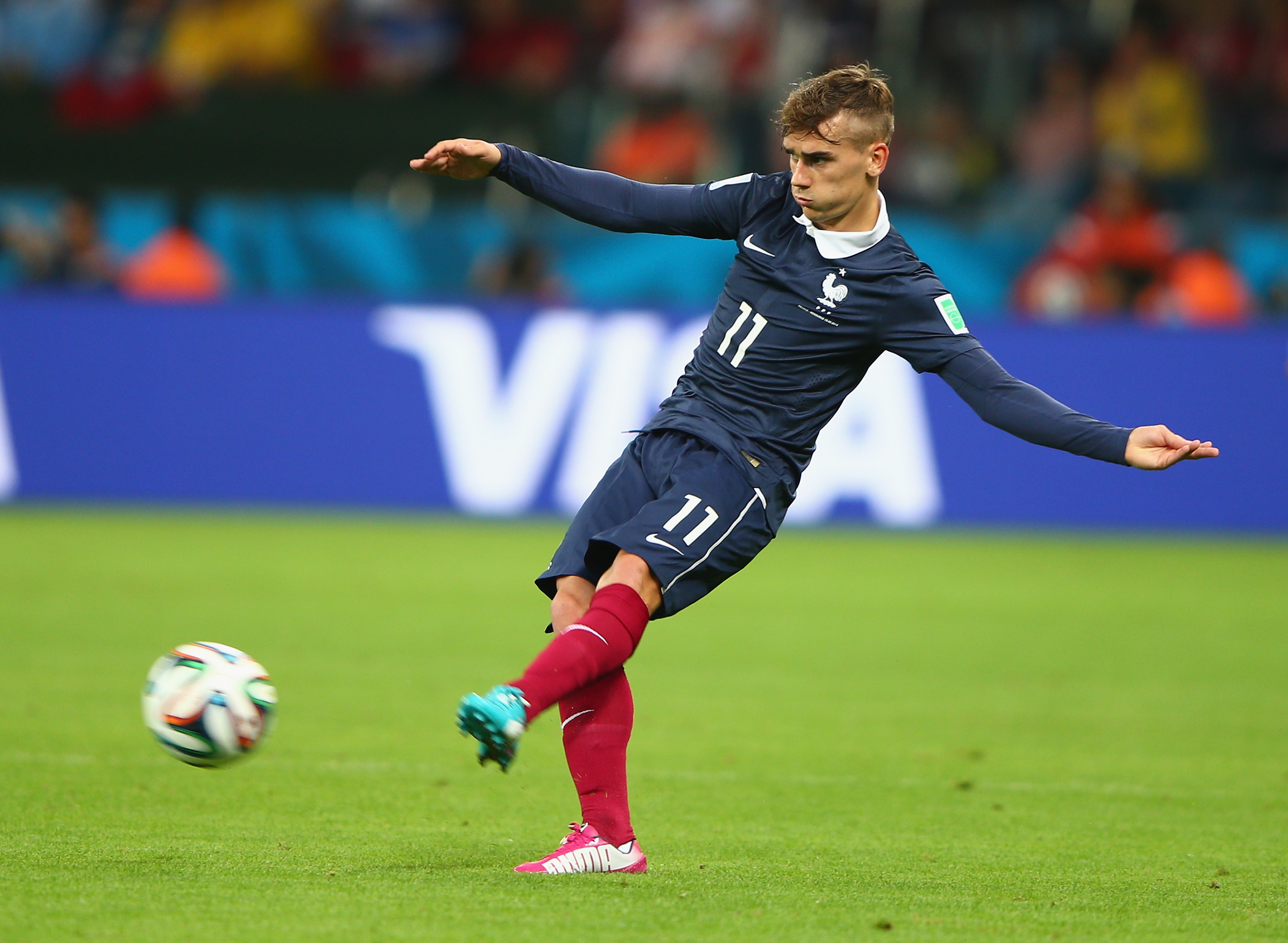 France’s socks are red as Tabasco. An hour of perspiration makes the solid blue in the shorts and polo-style jerseys seem inky. The pastels on the cleats add a touch of lightness and cool; and, for anybody in a bar craning up at a TV, they’re an innovative contrast alternative to the “men at work” fluorescents you typically see. On Sunday, during a win over Honduras, the French players who buttoned the jerseys all the way up — including Olivier Giroud, Rio Mavuba, and Griezmann — looked crisp. Griezmann wore a matching long-sleeved shirt under his, which gave his uniform a particular continuity and style. Shorts and long sleeves are a thing, and the reason you’re drawn to Griezmann’s version is the little-boy sophistication of it all. He’s at the World Cup. But he could also be at recess.

Some of the big sports-apparel retailers are showing live matches in their stores. During Costa Rica’s upset of Uruguay on Saturday, Adidas shoppers in SoHo stood around a double-sided console looking alternately grim and beside themselves. Neither country is sponsored by Adidas (Lotto has Costa Rica; Puma has Uruguay), but the TVs make sense: Come for the soccer, leave with a kit.

The Wall Street Journal’s Japan Real Time blog reports that Adidas Japan says it’s sold a lot more of the national team’s 2014 World Cup jersey than its 2010 incarnation. Great. But what about the socks? The Japanese uniforms had a great time with striping and pip, and the sock turned it all on its side — a dark blue base, with three loops of white up top, and right in the middle of the calf stacked shades of electric-rose stripes. These were work-of-art socks, hall-of-fame socks, see-this-is-why-I-wear-only-Japanese-socks socks. 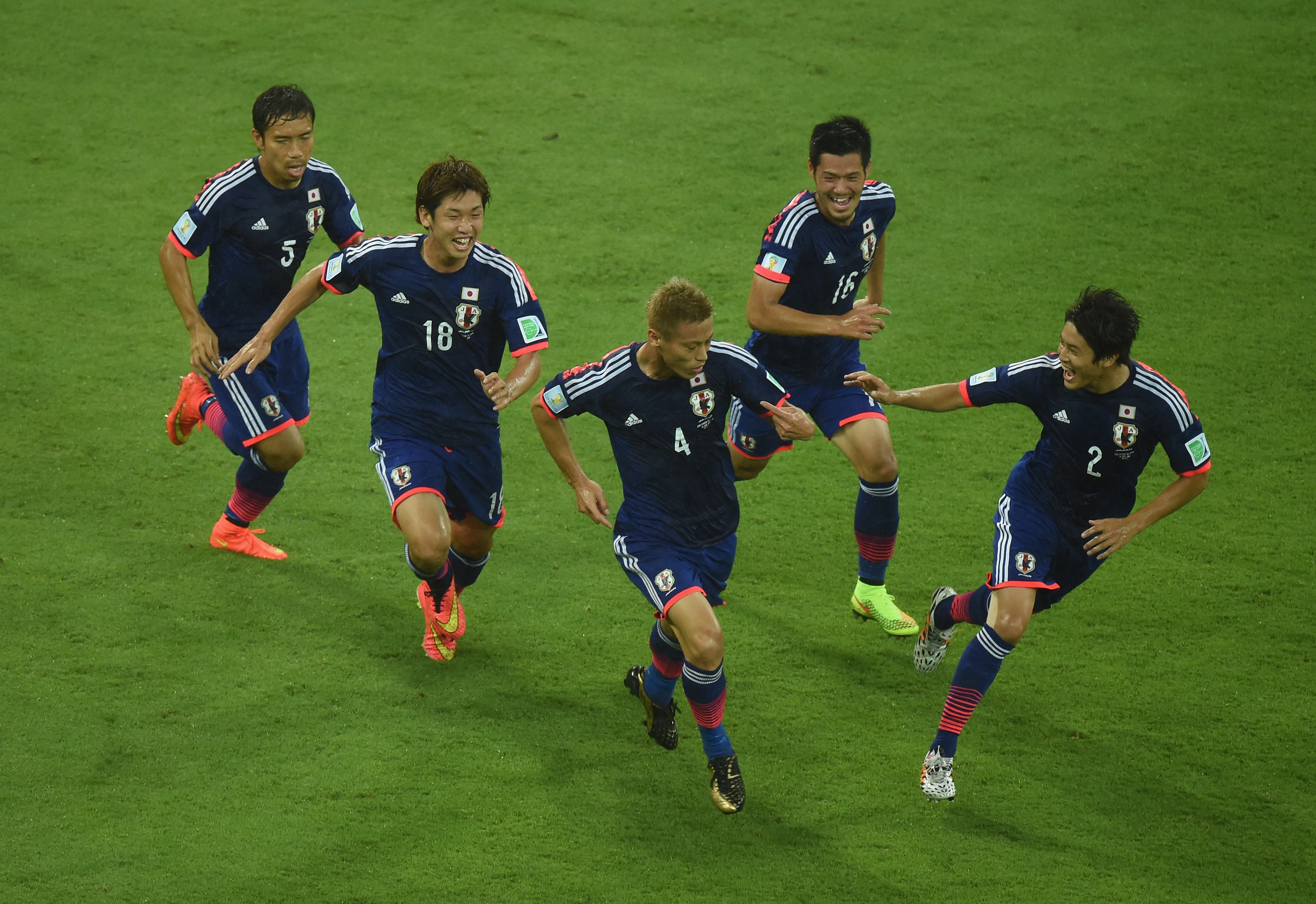 They didn’t help Japan overcome Ivory Coast, whose aggressive tangerine uniforms matched its style of play. They’re not pretty clothes, just very (very) flattering. Japan was the more wittily uniformed team, and if the tournament knew what else mattered, it would issue points for that. If Adidas knew, it’d be selling the bejesus out of a version of those socks.

I don’t know what happened at the Puma store. But anyone can see what happens with the Puma jerseys: They’re tight. For the most part, they’ve given up on boldness, flourish, and flair and opted for clothes that probably do a lot for movement, the wicking of moisture, and all the rest. And, look, these are athletes. It’s a relief to see clothes that showcase the contours of a man’s body rather than obscure them in too much state-of-the-art fabric. Still, can’t a company do that and push against the limits of design? 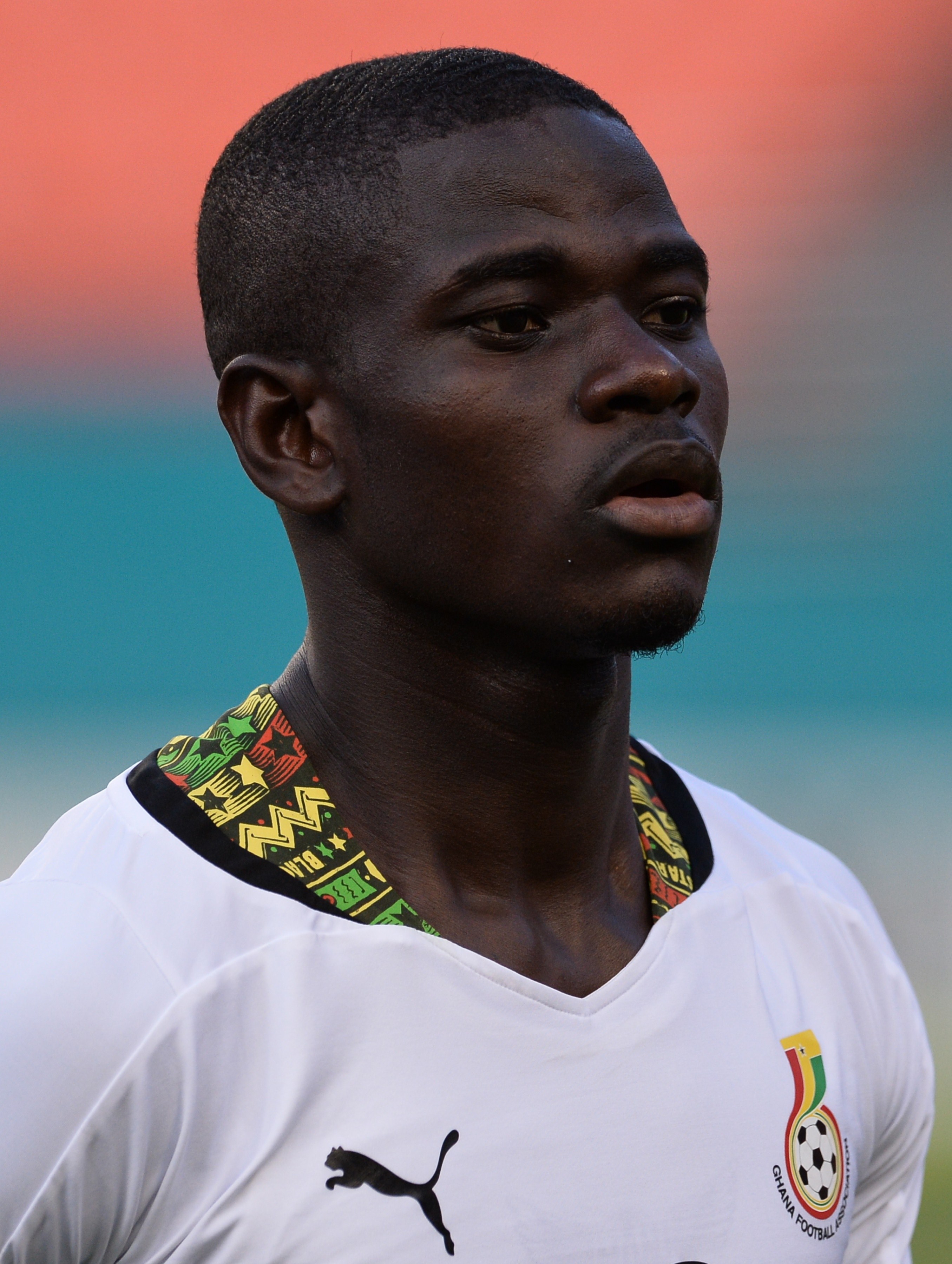 Other apparel companies have more to say about cut and style. But on Monday, Puma introduced the uniform of the tournament. Ghana took the field against the United States in body-hugging white. First you noticed how wide the collar was. Then you noticed what else was sticking out of it besides a neck and a head: a kente print, enough to make some people where I watched wonder whether there might be a whole dashiki underneath. (Hilarious, given the overall clinginess of things.) This is what these uniforms should be doing: showing off. Why the designers for a major team, like Argentina, don’t think this way instead of running on auto-magic pilot is a mystery. Of course, too much thinking turns you into Belgium, which ran around with Algeria on Tuesday looking like a mustarded version of the hot dogs from Burger Time.

The Americans wound up playing a gutsy match. But what I’ll remember most was Jonathan Mensah looking majestic in an African print and Tim Howard looking like a walking QR code.

Things could always be worse. If you’re an American watching the tournament from home, they are. The former player, coach, and ESPN commentator Alexi Lalas has brought an air of authoritative certitude to his on-air analysis and a “maxin’ and chillaxin’” air to his choice of footwear. Since the start of the tournament, he’s been wearing dark suits and a tie with bright red loafers, the kind with rubber nubs along the spine and sole. Sometimes when a gentleman makes this mistake, he doesn’t know. He thinks the color says “fun.” That’s not the sense Lalas gives you. Lalas says, “A lot of me is at work. But the rest is on vacation.” 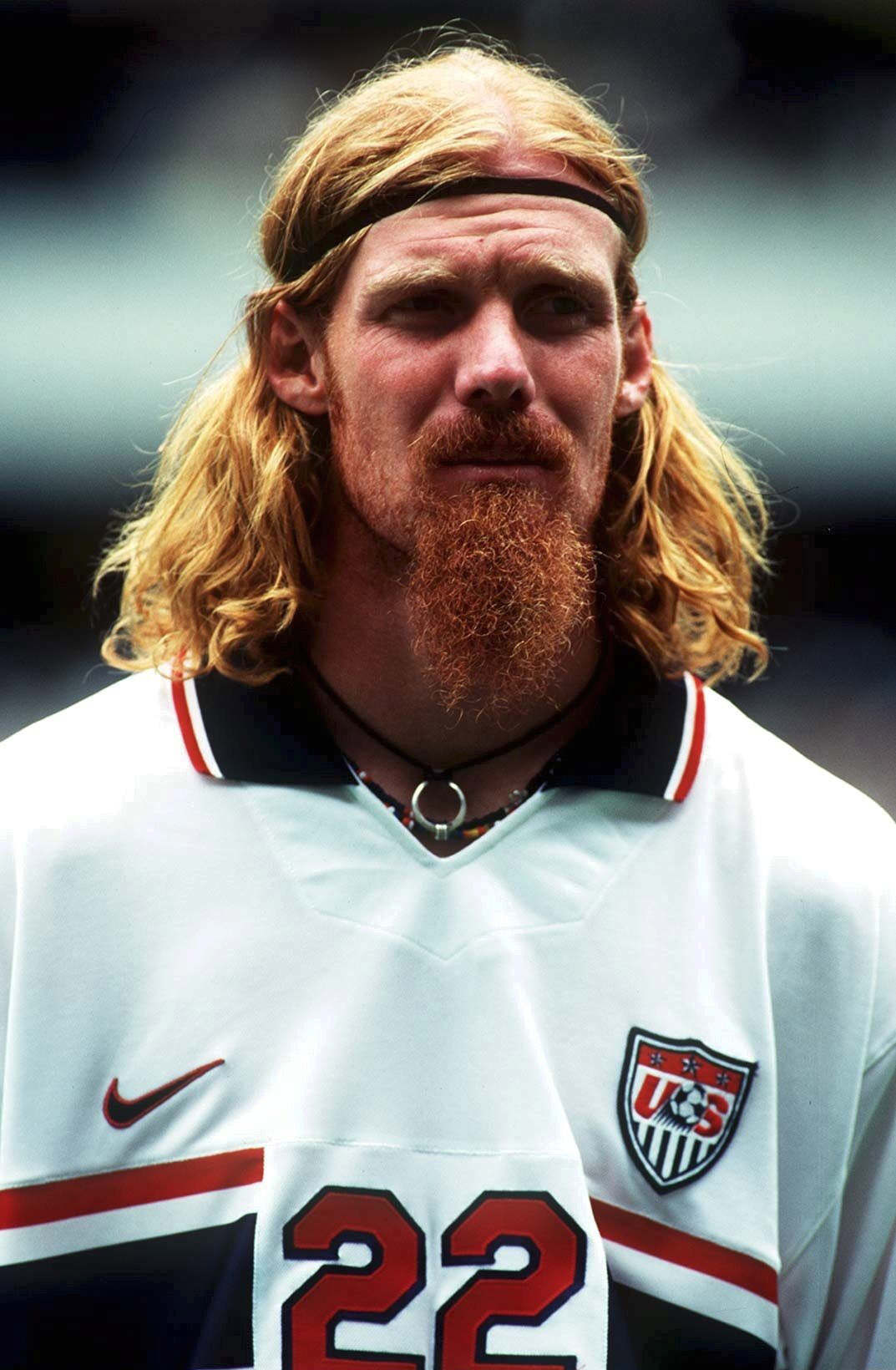 Lalas spent years on the U.S. national team. You might recall that he became famous in the early Andre Agassi era and played soccer with a big, unkempt, orange mop and a matching facial growth. He looked like Scooby-Doo’s Shaggy doing roadie work for Phish. As it happens, in 1998 he recorded a power-pop album called Ginger that included the songs “Drive-by Serenade” and “Pretty Mess.” Imagine the Gin Blossoms and Soul Asylum with the faintest dusting of Poison. Lalas has made the most of his varied modes. For ESPN, he’s a clean-cut, agelessly handsome soccer expert (who as of Tuesday appears to have misplaced his razor), and I wouldn’t have noticed the loafers but for the staging of the late-night recaps, which requires the analysts to sit in low, reclining armchairs. There’s no desk, just Bob Ley guiding the conversation from a noticeably higher, more erect perch.

Over the weekend, Ley sat with Lalas and the former German player Michael Ballack, who wore an eye-catchingly tight black suit that matched his stubble and hair. For such long men, the incline of the chairs contributed a comical pinch of sleaze. Ballack, for instance, was almost forced to sit with his legs open. Lalas, meanwhile, sat in a way that drew attention only to his feet. On Sunday, I noticed he wore similar clothes but was sockless. All the rock and roll of his youth had come to this: “Dad goes to a David Lee Roth concert after work.” You see guys in a similar getup and wonder what they were thinking or, on television, “Who let them think that?” This, too, is what crosses your mind whenever Fowler is in tournament play: Where’s the color caddie? Men do this. They overshoot their cool. It’s possible Lalas arrived in Brazil and let the local sense of festivity go to his head. He just needs to keep it away from his feet.