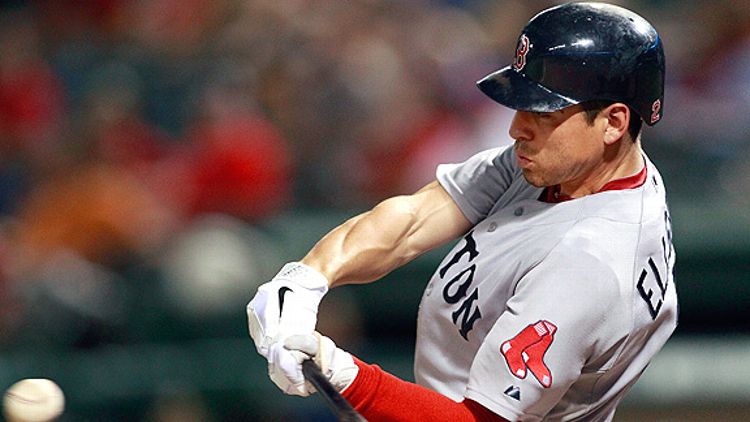 1. Jacoby Ellsbury is my AL MVP.

Advanced stats are anything but unanimous on the award. FanGraphs has Ellsbury ahead of Jose Bautista and Justin Verlander. Baseball-Reference has it as Bautista by a hair over Verlander, with Ellsbury trailing both. I’m receptive to the argument that we shouldn’t vote for MVP based solely on the WAR leaderboard, but for different reasons. Much of WAR’s input depends on defense, and we’re still refining advanced defensive metrics. Ellsbury himself has gone from a player who was lightly regarded by Ultimate Zone Rating to being rated as an elite center fielder. It’s certainly possible that he’s dramatically improved … but statistical noise is a more likely explanation.

Beyond that, a player can’t control when he delivers a big hit or a lights-out start. But if you’re stuck on three MVP candidates and have a hard time breaking the tie, I don’t think it’s unreasonable to consider Ellsbury’s run of game-winning hits. On Sunday, he blasted three homers, including the game-winning three-run blast in the 14th inning of the nightcap that saved the Sox from falling into a tie with the Rays. Yes, Scott Proctor was pitching. Yes, if Ellsbury had hit a homer three hours earlier Boston could have won the game that way too. But we can embrace drama, even a little. In a year where you have three very worthy candidates and no irrefutable way to parse the small difference in each player’s value, then, I’m OK with looking for a little pixie dust. So I’ll take Ellsbury … and remain perfectly content if either Bautista or Verlander wins instead.

2. You can’t blame Joe Girardi for how he managed last night’s game.

He wasn’t the one who made the final, game-changing move, for one thing. Girardi got tossed in the 13th inning after running out to argue a Don Denkinger-esque blown call by Tim McLelland, merely the latest stop on the Incompetencepalooza Tour that MLB continues to foist on us with its bumbling umpires and lack of instant replay. That left Tony Pena in charge, and he served up a beauty of a managerial decision. Scott Proctor might be the single worst pitcher to throw an inning of major league ball this season. Joe Torre wore Proctor’s arm out years ago and the Yankees brought him back because they either felt guilty or wanted to lose some games. Proctor has no business pitching mop-up innings in a T-ball league for six-year-olds, let alone entering a tie game in extra innings with the Red Sox and Rays seasons on the line. Yet Pena threw him out there anyway.

And yet … Pena didn’t owe anybody anything. Neither did Girardi. The Yankees had clinched home-field advantage throughout the American League playoffs, and they understandably wanted to protect the players who will actually play during the playoffs. If anything, bringing in Proctor wasn’t even the most perplexing decision of the game; that honor went to Girardi’s decision not to pinch-hit for light-hitting rookie catcher Austin Romine with the bases loaded in the bottom of the 9th. Yes, the Yankees skipper wanted to prevent Russell Martin from catching after having him squat in the first game of the doubleheader. But he could have moved Jesus Montero to catcher, scrapped the DH spot and used his deep bench to pinch-hit should that situation have arisen later in the game. If winning were the most important goal, that would been a stupefyingly obvious move. Winning was not, in fact, the most important goal.

The bigger reason why Rays fans (the ones most hurt by these decisions) shouldn’t be pissed? Their team had its chances against the Yankees’ B lineup and failed. In game one of last week’s doubleheader in New York, the Yanks sat Mark Teixeira and Curtis Granderson, trotted out a cavalcade of no-name pitchers and still beat hapless Tampa Bay. In game two, Alex Rodriguez, Derek Jeter and Nick Swisher sat … and the Rays lost again. The Rays have received their share of credit for rebounding to within one game of Boston for the AL wild card and making this a compelling race. But it’s been Boston’s horrendous September that’s created this opportunity more than any impressive streak by Tampa Bay. If anything, the Rays have blown several golden opportunities, few bigger than that doubleheader against New York’s second stringers. Ellsbury took advantage of a Yankees scrub, the Rays didn’t. Going too far beyond that smacks of sour grapes.

3. If the Rays fall short, my favorite managerial decision of the season will be forgotten. Which would be a shame.

When Jeff Niemann surrendered a two-run homer to Jose Bautista in the first inning of Saturday’s game, he could take comfort in the fact that Bautista had launched 42 bombs before that one, so he was hardly alone. Joe Maddon wasn’t nearly that philosophical. The Rays skipper saw not only the homer, but also a first inning in which Niemann had struggled mightily, needing 38 pitches to get through the frame and throwing just 19 strikes in the process. Rather than sit back and hope that his starter could turn things around, though, Maddon took action, yanking Niemann from the game. The big righty wasn’t injured. The Rays bullpen had been taxed in recent weeks, dealt with an injury to Kyle Farnsworth, and shown on multiple occasions that it lacks depth and the kind of quality it had shown in the past three years. Maddon didn’t care about any of these things. All he saw was a pitcher who didn’t have it, and a game his team needed to win to stay in the race. Maddon yanked Niemann, bringing in lefty rookie Alex Torres to start the second inning.

There was no way Maddon could have known that Torres would overcome his incredibly shaky command, toss five scoreless innings, and — for the moment, at least — save the Rays’ season. But it was a risk worth taking, the kind of ultra-aggressive move you very rarely see managers make, even in do-or-die situations. Jim Leyland’s going to win AL Manager of the Year this season, and you can’t begrudge him the honor. But if I were voting, Maddon would be the pick. He makes more ballsy, intelligent, contrarian moves than any other manager in the game. More often than not, those moves work.

In the AL, we have a race chiefly because Boston is 6-18 in September. In the NL, the bigger story isn’t a potential collapse by the Braves as much as a huge surge by the Cardinals. St. Louis has won 14 of his past 18 games, several of them in dramatic fashion. On Saturday, St. Louis went scoreless for eight innings, tied the score at one with a bases-loaded ninth-inning walk, then won it on a Carlos Marmol wild pitch. Eleven of the Cardinals’ 14 wins during its recent streak have been by two runs or less, seven of those by a single run. It’s difficult to see sustained success in one-run games, and the best teams will typically outscore their opponents by bigger margins in the long run. But a vastly improved bullpen led by newly-installed closer Jason Motte has been outstanding. The Cardinals are taking care of business, and yes, they’re taking advantage of a Braves team that’s won just seven of its past 20 games. As we said last week, the Colby Rasmus trade could be a colossal disaster long-term. But if that trade doesn’t happen this year, the Cardinals might be eliminated by now.

5. If the Braves do hang on, they’re still the playoff team others would most want to face, by a wide margin.

Tommy Hanson, Jair Jurrjens and Peter Moylan are all expected to miss the NLDS for Atlanta. But it doesn’t stop there: Martin Prado can’t hit while Jason Heyward and Dan Uggla have had hugely disappointing seasons (despite Uggla’s much improved second half.) Even Brian McCann, the team’s best player, has seen his OPS dive more than 200 points in the second half. The Brewers lead the Diamondbacks by one game in the battle for the NL’s second seed. The winner of that battle plays the Braves in the first round, loser plays the Phillies. This is the stealth third race to watch in the final week of the season, partly because the Phillies have been so dominant for most of the season, but also because the depleted Braves are limping to the finish line.

6. The schedule would seem to favor the Sox and Cardinals in the final three games of the season.

In the AL, Boston gets Josh Beckett vs. Tommy Hunter, Erik Bedard vs. Zach Britton and Jon Lester vs. Alfredo Simon in its three-game set at Baltimore. Even if you acknowledge Bedard’s potential struggles as he attempts to make it all the way back from injury, or Lester ceding 29 baserunners and 16 runs over his past 13.2 innings and three starts, Boston has a decent chance to sweep this series (which would clinch a playoff spot), and an excellent chance to take two out of three (and ensure at least a one-game tiebreaker). The Rays do see favorable matchups of their own, with their top three of James Shields, Jeremy Hellickson and David Price facing lightly-regarded Hector Noesi, the struggling Bartolo Colon and a pitcher to be named later for the Yankees.

Meanwhile, the Braves host the loaded Phillies for a three-game set. The Phils trot out Cliff Lee, Roy Oswalt and Cole Hamels against the Braves trio of rookie Randall Delgado, ice-cold Derek Lowe and default staff ace Tim Hudson. Meanwhile, the Cardinals play the worst team in baseball, the Houston Astros, with two of St. Louis’ top three taking the mound in Jaime Garcia and Chris Carpenter, along with the serviceable Jake Westbrook.

Boston and St. Louis look best on paper for the next three games. But even the worst teams can play spoiler under the right circumstances, and the Phillies and Yankees could become even more blatant about benching their regulars for these final three games. Once these three games are played, we could see a tiebreaker. Or two tiebreakers. Stay tuned.