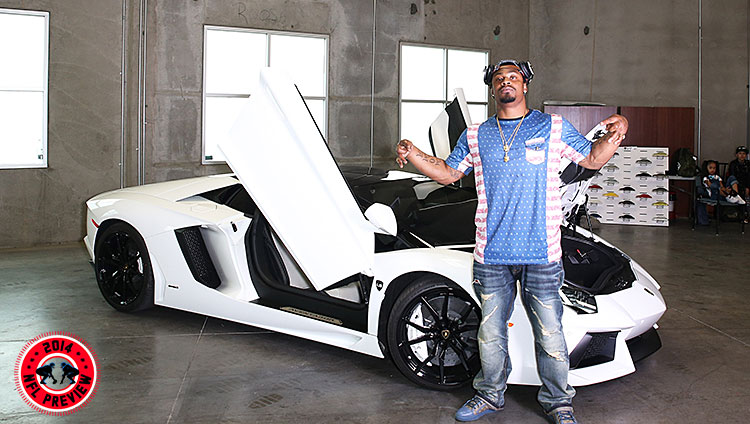 Marshawn Lynch took a little longer on his way to becoming every other running back, but this weekend, he finally got there. Friday afternoon, Lynch stated his intention to hold out from training camp by calling a former teammate turned TV analyst and having him announce it on-air. Like so many other things with Lynch — his candy, his fury, and being all about that action — he did it his own way. Over the past few years, if Lynch has been anything, he’s been different.

The thing is, no matter how unique Lynch is as a player and personality, he, like most running backs, is replaceable. At least that seems to be the theory driving the reaction.

On paper, there are plenty of reasons why that might be true. Even last year, people figured Lynch was on borrowed time in Seattle, because of the team’s balance sheet. His cap figure in 2015 will be $9 million, the third-highest total among running backs, and Seattle would save $7.5 million by cutting him loose. He’ll be 29 by then, with a lot of mileage, and we all know the rules. Giving money to running backs pushing 30 doesn’t turn out very well. Now that Lynch is asking for even more (or really, just some security beyond next season), it feels like the consensus is that he’s even more expendable.

Running backs do have diminished value, and Lynch is getting older. What’s hard to understand is how Seattle’s success has somehow diminished Lynch’s value, despite his role in it. One of the main points being used in the argument against paying Lynch is that the Seahawks are a team fresh off a championship — a championship won with defense. That’s true for the most part. The Seahawks trotted out one of the best defenses ever last year. That defense dominated in the Super Bowl when Lynch didn’t. He had only 39 yards on his 15 carries, his worst game of the season. But here’s the thing: Seattle had to win two playoff games to get to the Super Bowl, and there Lynch was fantastic, with a combined 249 rushing yards on 50 carries.

It’s the same way he played all year. His 1,257 rushing yards aren’t mind-blowing, but the way he got them is. According to Football Outsiders, Lynch led the league in broken tackles last year with 59, eight more than anyone else. His broken-tackle rate (17.5 percent of his touches) blew away every other back in the league who got significant work. Pro Football Focus’s elusive rating had only Adrian Peterson as a harder running back to take down.

And Lynch did it all with an offensive line that was dinged up and often ineffective. Pro Bowl left tackle Russell Okung missed a chunk of the season with an ankle injury. Pro Bowl center Max Unger had a pedestrian year by his standards. The Seahawks aren’t some run-game machine with parts that can simply be switched in and out. The only thing you could call a machine is Lynch.

When Jamaal Charles announced his own holdout last week, some supported his claim by pointing out that he’d accounted for more than 36 percent of his team’s total offense. Lynch may not be quite there, but he did manage 29 percent, which bested Peterson’s 26 percent.

There’s no denying that Charles had a much better case for wanting to be paid. He was due just $3.65 million this year, and that doesn’t reflect just how great he’s been the past two seasons. He also has about 700 fewer carries than Lynch (two seasons’ worth), even though he’s only eight months younger.

What I find most interesting about all of this, though, isn’t whether the Seahawks should actually pay Lynch — the history of running-back holdouts is littered with mistakes, and there’s a good chance a hefty extension for Lynch would be another. But that doesn’t mean he’s disposable. That seems to be how the Seahawks and plenty of others are treating him.

Among the first reactions to the Lynch news were comments about the skyrocketing fantasy value of Christine Michael. Taken in the second round of last year’s draft, there has been talk that Michael could steal Lynch’s gig for the better part of the year. You’d think that based on what Lynch did last year, people might think twice about how easily a running back we’ve never seen could step in and do his job, but I guess not.

Seattle’s offensive-line situation hasn’t dramatically improved since last year either. Okung is back healthy, and there’s a good chance Unger will be better this year without some of the nagging injuries that slowed him down. But for the most part, the group is still the Seahawks’ biggest question mark. James Carpenter, the former first-round pick who Seattle has seemingly avoided playing whenever possible, is slotted to play left guard while a pair of seventh-round picks (J.R. Sweezy and Michael Bowie) are penciled in on the right side. The Seahawks drafted tackle Justin Britt in the second round, but there’s no telling if he’ll be ready to step in as a rookie.

What the Seahawks have to be hoping is that every non–running game part of their roster will be better than it was a year ago. With the passing game, that seems reasonable. Percy Harvin should be around for at least a little while, the Seahawks drafted two receivers in the first four rounds, and Russell Wilson will probably be asked to take on more responsibility.

It’s the defense that might be getting a little too much credit. Yes, the Seahawks re-upped both Earl Thomas and Richard Sherman this offseason, and there’s no reason to think they won’t have the league’s best secondary yet again. Elsewhere, though, they’ve lost at least some of what made them such a terror a year ago. Seattle’s front was defined by its flexibility, flexibility it has lost by shelling out big money to its stars.

Red Bryant and Chris Clemons weren’t the most important players on Seattle’s defense, but they added versatility the Seahawks will miss. Seattle’s greatest advantage last year was its depth. With the rotating crop of defensive linemen, Michael Bennett could line up at defensive tackle on passing downs and gain a subtle advantage he wouldn’t have outside. Those subtle advantages have vanished in several spots.

That’s where the gap in the case to jettison Lynch exists. The thinking that surrounds most great teams is that they’ll simply continue to be great. Often, the issue is that what made those teams great is hard to sustain. One of the things that made the Seahawks great was Marshawn Lynch. That seems worth remembering.

About Last Weekend: Deck the Hall