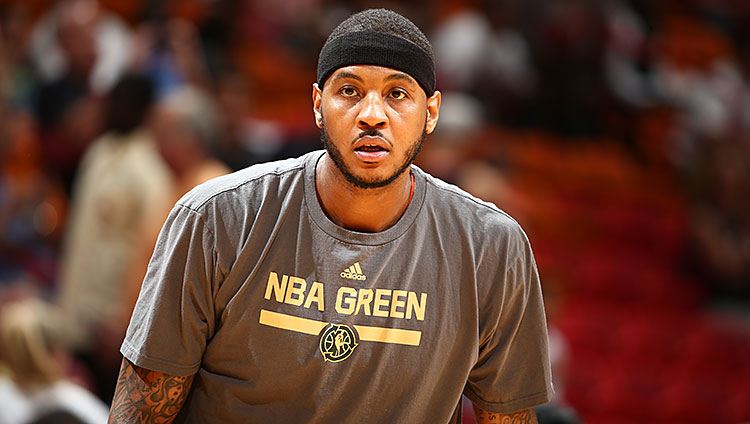 With the marquee names and sheer volume of movement, NBA free agency has become its own second season. Just fewer than 100 NBA players have signed fresh deals. Some have chosen to stay in place, while others are moving on to new teams. By taking a look at all the signings on the chart below, we can get a better idea of who is doing what. Players who are relocating are labeled with red text; those staying put are in black. 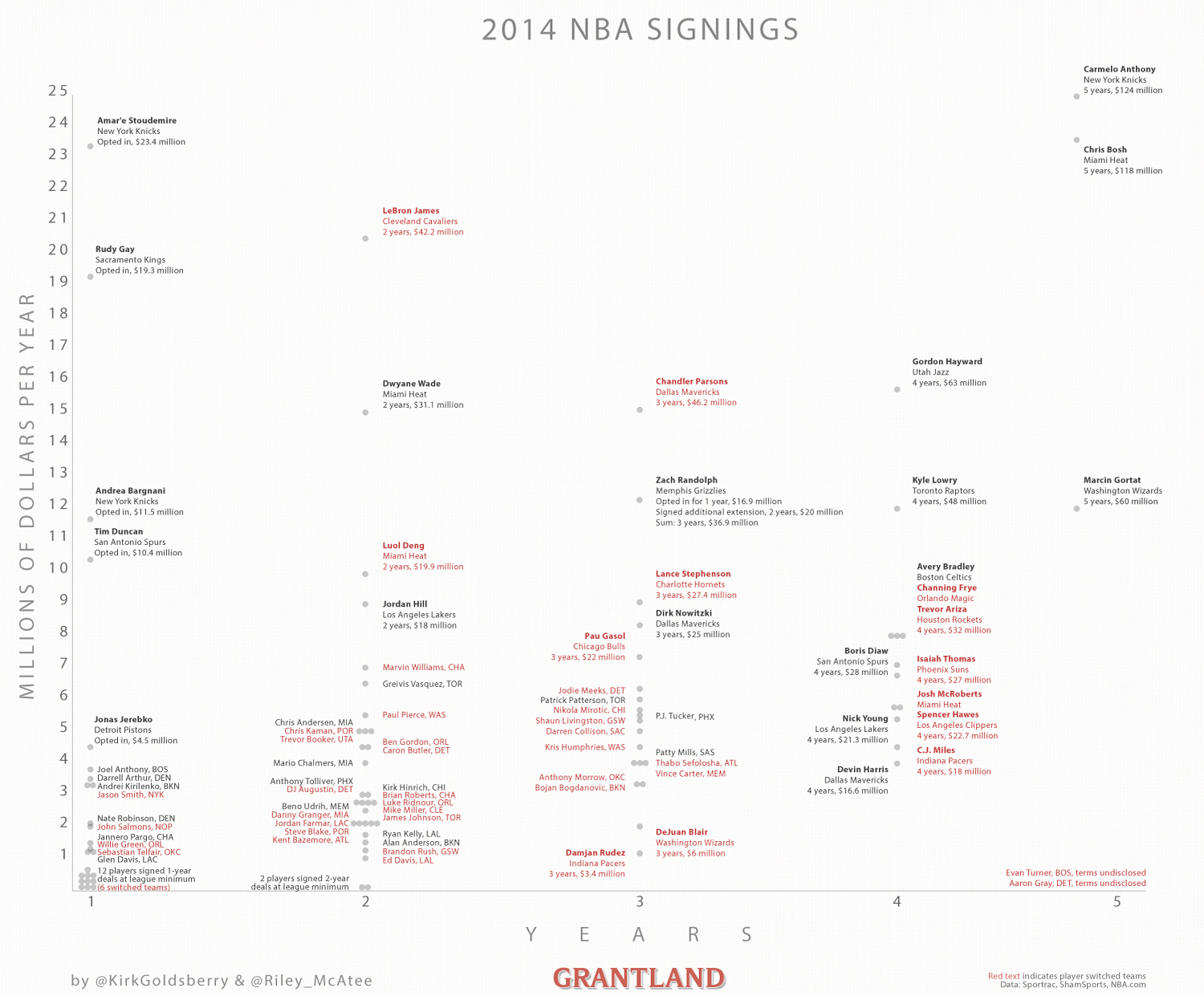 Thanks to the NBA’s collective bargaining agreement, the league’s best players are the least free. In order to move to a better basketball situation, many players must sacrifice millions of dollars. As if uprooting a family, changing cities, and immersing themselves in a new work environment weren’t big enough deterrents to relocation, the CBA essentially adds to free-agent inertia by artificially inflating the value of staying put while simultaneously oppressing the attractiveness of every other potential destination on the NBA map.

Looking again at the chart, it’s noteworthy that there’s a big hollow space atop the four-year column. That’s the space where max veterans who choose to relocate would normally go (e.g. Carmelo Anthony to Chicago, or Chris Bosh to Houston). It’s empty for a reason. Given the allure of that fifth-year money, and the rising belief that the league’s salary structure will itself inflate in two years, signing a four-year max deal in a new city makes less sense than ever. 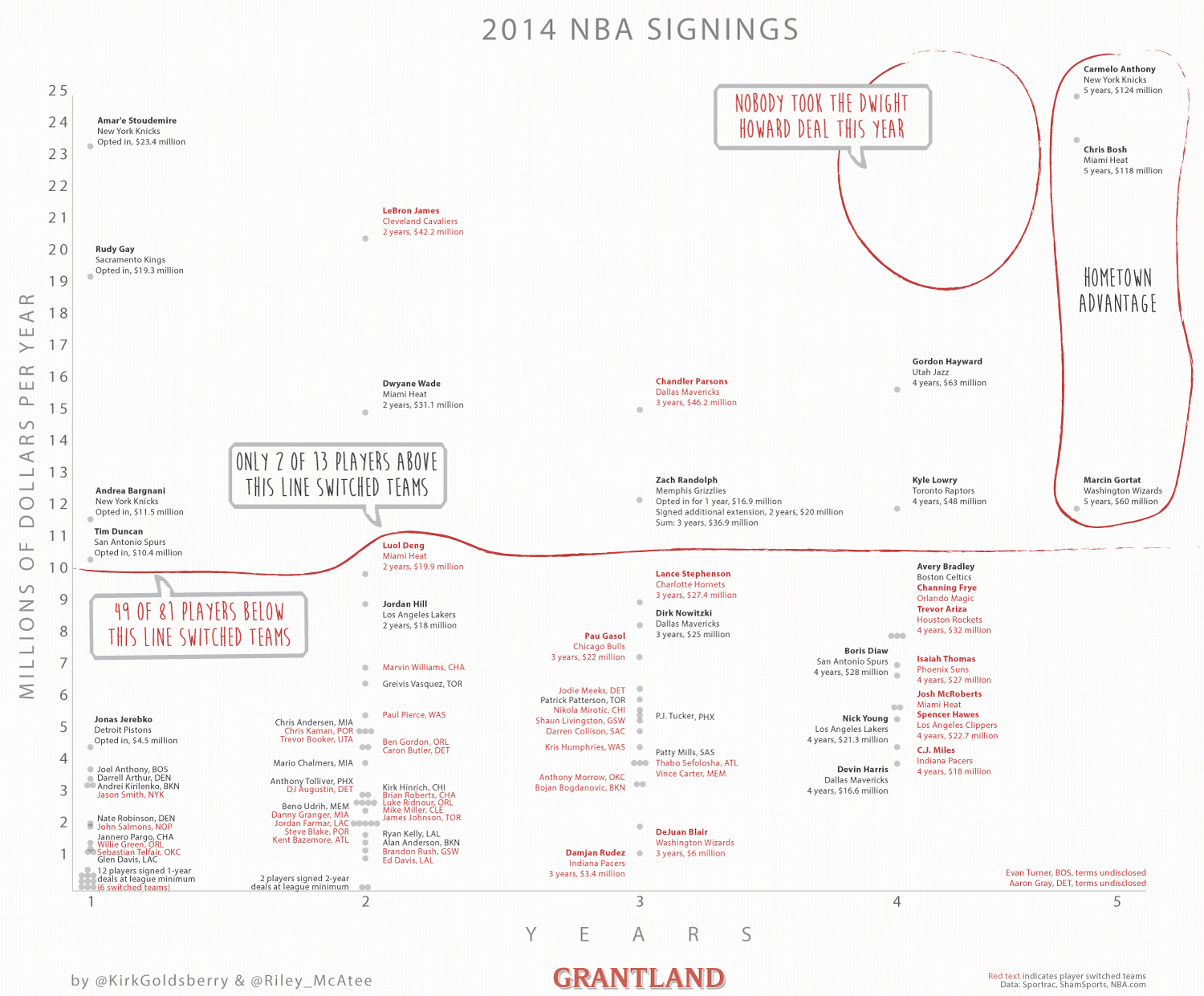 The CBA is littered with multiple “hometown advantages” that intentionally discourage the league’s biggest stars from relocating. Anthony is a perfect example. As it turns out, Anthony’s “free agency” was far from free. Sure, he was “free” to go join a better basketball situation in Chicago if he wished. He was also “free” to leave a mountain of cash on the table. League bylaws enabled the Knicks — and only the Knicks — to offer Anthony a fifth year of max money. That the Knicks can offer Anthony an additional year of max money, while 29 other suitors can’t, may seem like nothing but a contrived market loophole, but it’s much more than that. It’s the manifestation of one of the most significant migration barriers in professional sports.

The chart also reveals the relative density of short-term and “cheap” contracts versus the relative scarcity of bigger, long-term contracts. It may not be surprising, but it’s still stark: Of the 93 deals announced so far, only 13 are worth more than $10 million per year, and only 15 are longer than three years. Moreover, those players with lesser salaries are much more likely to relocate.

Lower-tier NBA players switch teams for a variety of reasons. But the fact that their value doesn’t run up onto some contrived maximum threshold is most important. Unlike “max players,” they experience a much freer market. DeJuan Blair went to Washington largely because it offered him the most money. The same goes for Trevor Ariza and Houston.

Looking at this year’s signings, it’s safe to say the league’s CBA constrains the movements of its highest-paid players much more than it does its “average” players. Would Anthony stay in New York for the exact same deal he could get in Chicago or Los Angeles?

Would Bosh go to Houston for the same deal he got in Miami?

We will never know, but it’s probably worth exploring whether this is in the best interest of the NBA.