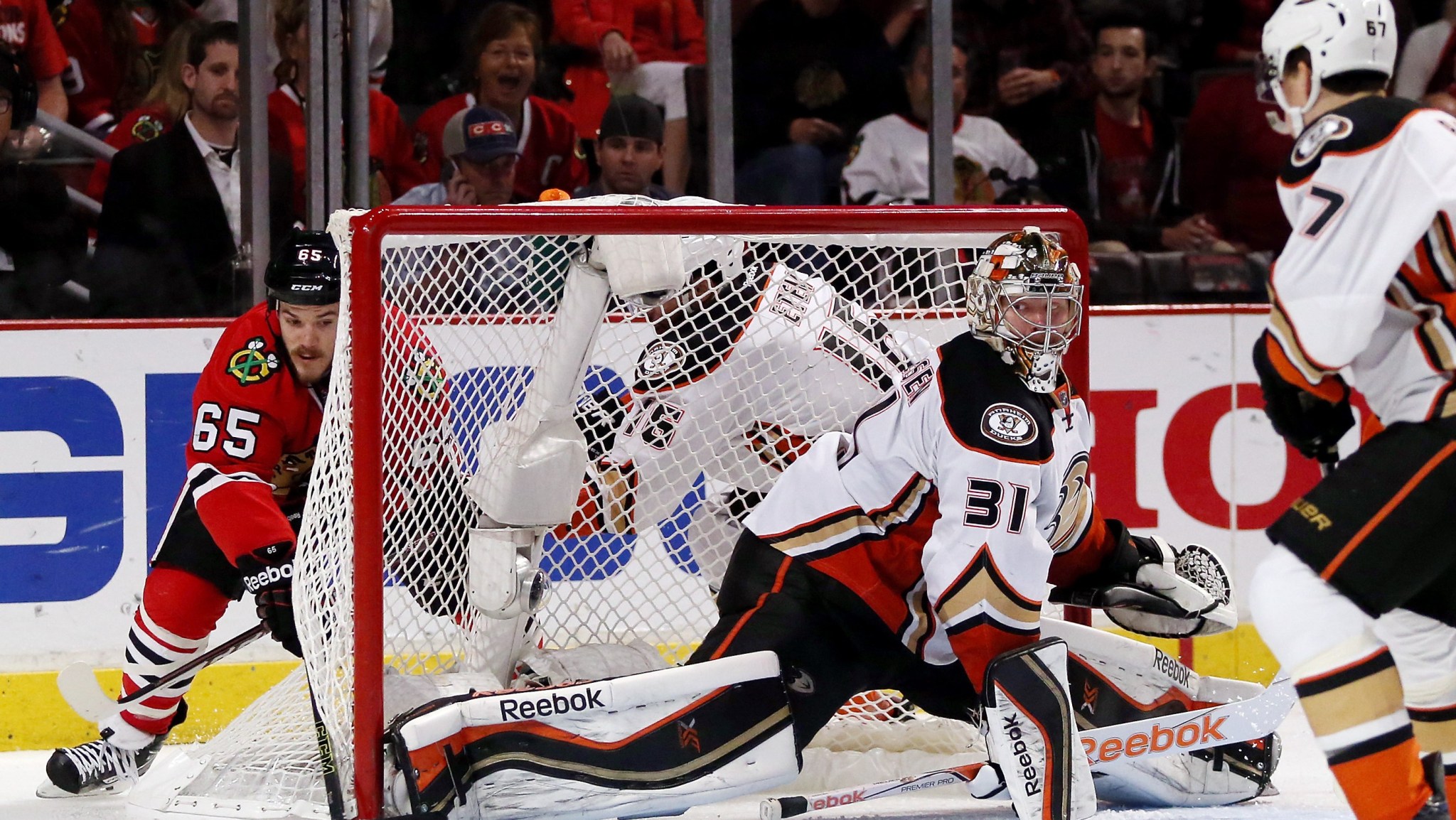 For the first time since 2000, hockey fans have a pair of Game 7s to look forward to in the conference finals. The Rangers will host the Lightning on Friday, with the Ducks welcoming the Blackhawks on Saturday, and by the time it’s all over we’ll have our Stanley Cup final matchup.

Game 7s tend to be just about impossible to figure out ahead of time, but that’s no reason not to at least try. So let’s take a look at seven factors that could help decide a Game 7 … or two.

It’s the goaltending. It’s always the goaltending. In fact, this seems like such an obvious category that I spent way too much time trying to figure out a way to get around including it at all. But I can’t, because it will be the biggest factor in both games, so we might as well start with it. Here’s the short version: The team with the better goaltender will probably win.

The slightly longer version is that both series feature battles between goalies who’ve taken turns looking both unbeatable and awful, often in the same game. That’s probably caused an ulcer or two on the coaching staffs, but it’s made for some fascinating hockey, where no shot is harmless and no lead is safe.

Let’s break down the numbers. As you’d expect, Henrik Lundqvist has been the best of the four remaining goalies, putting up a .928 save percentage. He’s also been the best in the third round at 5v5, where he’s at .934, although his poor .720 while shorthanded has dragged his overall numbers down.1 That gives him an edge over Ben Bishop, who’s at .917 overall and just .898 at 5v5. Both Bishop and Lundqvist have had awful games in what’s been a surprisingly high-scoring series, so nobody’s looking unbeatable, but Lundqvist has clearly been better.

Out west, Frederik Andersen and Corey Crawford have very similar numbers over the course of the playoffs. In this series, Andersen has been better 5v5 while Crawford’s numbers are slightly better overall, although we’re dealing with a six-game sample size, so we won’t read too much into small gaps. The eye test says both have looked shaky in recent games, but Andersen in particular has been fighting the puck over the past two games, including this stinker that sent Game 5 into overtime.

We like to think of a Game 7 as the time when the biggest stars shine brightest, and it’s certainly true that it works out that way sometimes.2 But just as often the stars go quiet, some random scrub plays the hero, and we all agree to never speak of it again.

Given all the star power spread out between these four teams, it seems likely that at least one big name will break through. That would bode well for Chicago, since its top guns are already hot. Jonathan Toews had those two late goals in Game 5, and Patrick Kane has scored in three of the past four. Meanwhile, Duncan Keith may be playing better than anyone else in the playoffs right now, which works out well since at this point he rarely leaves the ice.

By comparison, the Ducks’ big two of Ryan Getzlaf and Corey Perry has had mixed results, combining for just two goals in the series. Getzlaf has been held scoreless but has chipped in seven assists, so he’s creating offense even if he’s started blaming himself for losses. Perry has been quieter, with two goals and no assists after racking up 15 points through the first nine games of the postseason.

In the East, the Lightning continue to get big production from the Triplets line of Ondrej Palat, Tyler Johnson, and Nikita Kucherov, and Steven Stamkos has now heated up (bringing Alex Killorn along with him). They’ve been more consistent than the Rangers’ top stars, although both Rick Nash and Derick Brassard have posted huge games late in the series. Meanwhile, Martin St. Louis has remained mostly invisible, and now has just one opportunity left to haunt his former team.

The Rangers are at home, meaning they’ll have the crowd behind them and plenty of celebrities in attendance and the aura of playing in The World’s Most Famous Arena.3 As you’ll no doubt hear several times in the lead-up to tonight’s game, they’re 7-0 at the Garden in Game 7s.

On the other hand, the home team is just 2-4 in this series. Home teams have fared better in the Anaheim/Chicago series, going 4-2, including wins in each of the past three.

None of that is likely to matter much.  But the Rangers and Ducks will also have the last line change, which might.

For Anaheim, that means the Ducks can go back to matching the Ryan Kesler line against Toews. The Hawks were largely able to get away from that in Game 6, preferring a strength-against-strength approach that matched Toews and Kane up against Getzlaf and Perry. We don’t know yet whether Joel Quenneville will even keep Toews and Kane together (he tends to split them), but if he does it just makes Kesler’s shutdown role even more crucial. Meanwhile, Getzlaf and Perry will be free to match up with a less defensively capable line, and also get some shifts against the Hawks’ shaky fifth and sixth defensemen, when and if they ever see the ice.

The line matching hasn’t been as prominent in the East,4 where Cooper hasn’t shied away from letting the Triplets go up against the Ryan McDonagh/Dan Girardi pairing. But Alain Vigneault has tried to get the Derek Stepan line against them while using Nash and Stepan against Stamkos, and he’ll be able to do that tonight.

Everyone loves to quote records when scoring first — they’re practically mandatory on every broadcast — even though it’s a weird stat. If a team scores first and then the other team ties it, did the first goal really matter? Apparently, based on the stats we see flashed on the screen, although that seems to defy common sense.

But the numbers don’t lie. So watch until one team scores, then turn off the TV and go to bed. I’m sure you won’t miss anything.

The Lightning are reportedly fighting a flu bug. At a time of year when every team is hiding multiple injuries and just about every player is pushing through at less than 100 percent, this just adds one more thing to the Lightning’s load. They’ve been careful not to use it as an excuse, and at this point it doesn’t seem like something that will keep anyone out of the lineup, but it’s worth remembering, especially if tonight’s game goes deep into overtime.

(For their part, the Ducks and Blackhawks don’t seem to be sick of anything except each other’s stupid faces.)

6. Special teams … or the lack thereof

Special teams are always big during the playoffs, as good defensive teams grind each other down 5-on-5 and converting power-play chances becomes crucial. The Lightning and Ducks have both been very good with the man advantage; the Hawks have struggled. So that should be pretty important.

Or will it? Remember, these are Game 7s,5 which often means the whistles get put away. Fans of the Islanders and Capitals won’t need a reminder of that, since they witnessed it in their first-round finale, when only one minor penalty was called over the course of the entire game.

Games like that are the extreme, but there certainly does seem to be a tendency for referees to ease up when it’s a do-or-die game. And while both of these series have been physical, neither has had the sort of over-the-top bad blood that would cause the officials to feel the need to set a tone early. It’s quite possible that we don’t see many power plays this weekend — which makes the few we do get even more important.

Both the Rangers and Blackhawks have been undeniably clutch in elimination games over recent years, which would seem to give them a big edge heading into a Game 7. But there’s a catch: When it comes to playoff hockey, “clutch” might not be a thing.6

Nate Silver took a look at this over at FiveThirtyEight earlier in the week, and he essentially found that there wasn’t much evidence that a team’s record in past elimination games has much if anything to do with how it’ll do in the future.

Some of you will read that, shrug your shoulders, and move on. Others will start mumbling at their monitors about how of course clutch is a thing, hockey is a game of intangibles that the numbers can’t always capture, watch the games, nerds, etc. I’m not here to convince you one way or another, so let’s leave at it this: If you want to factor some sort of clutch gene into your picks for Game 7, then you’re going to want to lean heavily toward Chicago and New York. Just be aware that you’re probably wasting your time.

So where does that leave us?

Figure out which team will get the best goaltending performance. Factor in which superstars will rise to the moment and come to play, or at least which ones will bank a shot in off a defenseman’s ankle. Home ice will matter, unless it doesn’t. Power plays will be important, unless they aren’t. The team that scores first will win, unless the other team is clutch enough to make a comeback. And if you shook hands with any Tampa Bay Lightning player this week, I hope you scrubbed afterward.

Add it all up, and there’s your winner. Simple, right? See you in the final.

This article has been updated to reflect that Frederik Andersen allowed a late regulation goal in Game 5.

Your Buddy, Your Boy, Your Bookie: Scott Ferrall on the Art of Sports Radio