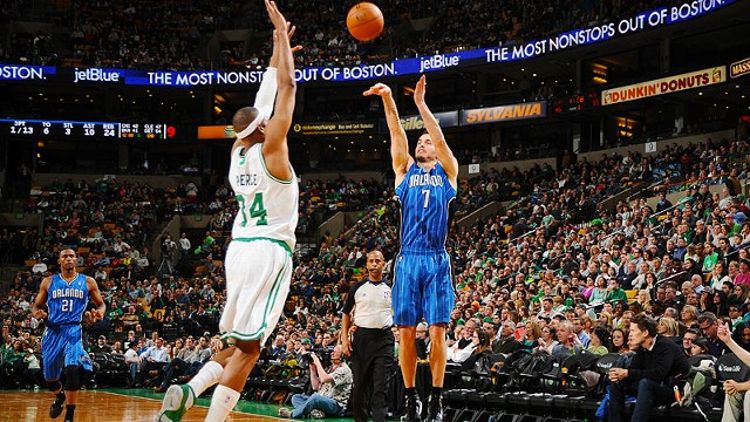 As Thursday’s NBA trade deadline inches closer, plenty of big names — from Dwight Howard to Josh Smith — are dominating the rumor mills. It’s easy to get caught stargazing, hoping against hope your team acquires an elite talent, but even though they lack the excitement of their higher-profile counterparts, a deal for one of the league’s many available role players can make a drastic difference. With that in mind, here is a list of seven players who could improve the fortunes of any playoff contender savvy enough to bring them into the fold.

Describing Redick as “just” a shooter overlooks the fact that his game has expanded by leaps and bounds since entering the league in 2006. For a destitute Orlando team lacking much in the way of playmakers this year, the former Duke guard has averaged a career-high 4.4 assists.

His ability to hit the pocket pass curling off screens or find his teammates out of pick-and-rolls is just the newest evolution to Redick’s game. Already much improved as a defender, Redick can now shoot off screens or after spotting up, run pick-and-rolls, and even handle the point guard spot in a pinch. Redick has raised his game to a point where he could be a full-time starter for a contending team if he’s paired with a bigger point guard (like Chicago’s Derrick Rose) with whom he can cross-match defensively.

His skill set and production make him a natural fit for quite a few teams, the most interesting being Denver. The Nuggets could sorely use his outside shooting, and his acquisition would lock the team into a deep and versatile nine-man rotation. One sticking point is that Redick lacks the handle to thrive in the Nuggets’ dribble-drive system, but George Karl could tweak his offense a bit (or even just include a new set play or two) to accommodate a player who would make his Denver team far more dangerous.

When it comes to the ratio of dollars to production, Dudley might be the best bargain in the league. The Phoenix wing has a career shooting percentage of 40.4 and is in the midst of a third straight campaign with a PER above league average (15.11). His greatest skill, however, might be in the shots Dudley doesn’t take. The versatile forward never plays outside his strengths, which is the primary reason he’s been incredibly efficient despite limited athleticism. Add in his energy and solid defensive chops, and Dudley could be a major acquisition for one of the league’s contenders.

Because he’s locked into such a great deal, Dudley might not come cheap for teams looking to bring him in before Thursday’s deadline. But for a team like Milwaukee, which has struggled all season to find a reliable combination of shooting and defense, Dudley would be a godsend. He could step into the starting lineup right away at the 3 and help unlock the floor for the Bucks’ shot-happy backcourt of Brandon Jennings and Monta Ellis. Dudley doesn’t exactly make the Bucks a title contender, but he’s an upgrade they could certainly use.

Though Morrow has fallen out of the Hawks’ rotation due to the emergence of rookie John Jenkins, the sweet-shooting guard could certainly still help a number of playoff-bound teams. His defensive shortcomings will likely make him only a bit player, but for a team like Portland — quickly fading out of the playoff race because of an inept bench — Morrow is worth exploring if he could deliver, well, any type of production when the starters are resting.

Any Lakers fan will likely be able to tell you that Sessions has some serious faults (he struggles defensively and as a spot-up shooter), but that doesn’t mean the Bobcats super-sub can’t pay huge dividends in the right situation. Sessions is an underrated scoring guard in the pick-and-roll, something the three teams listed above don’t have in their second units.

In particular, Indiana could acquire Sessions and let him run wild in pick-and-rolls for a bench unit that has lacked a creative scoring guard ever since Lance Stephenson graduated to the starting lineup. If the Pacers keep Stephenson there upon the return of Danny Granger, Sessions, along with Granger, could team up and turn a weak bench into a dominant force come playoff time.

Lacking a stylish game, the Mexican big man has largely flown under the radar since coming over to the NBA last season. But the cerebral Ayon makes his living doing a number of things — screening, cutting, and being a sound positional defender — that rarely show up in the box score. At 6-foot-10 and 250 pounds, the versatile Ayon has the size to bang with opposing centers and the quickness to stay in front of more perimeter-bound power forwards. With his blue-collar game, affordable deal, and defensive acumen, Ayon would be a great get for a Bulls team lacking quality frontcourt depth.

As Minnesota’s once-promising season continues to spiral downward, the reliable Ridnour could be acquired rather cheaply given the team’s glut of guards. The veteran can capably get a team into their offense and cause some problems if he’s allowed to unleash his silky pull-up jumper in pick-and-rolls. If Andrew Bynum is to return soon, Philadelphia should chase hard after Ridnour to shore up a backup point guard spot that has been underwhelming (to say the least) all season.

Held back by an undefined game that has left him in positional limbo, Jerebko has value in one specific area that could prove vitally important for teams in the Eastern Conference playoffs: stopping Carmelo Anthony. In the Pistons’ February 4 matchup against the Knicks, the Swedish forward seemed to frustrate New York’s star forward for every one of the 17 minutes he saw the floor. In that short stint, Jerebko forced Anthony into a couple of tough shots as well as this ugly turnover:

With loads of energy, good feet, and a sturdy 6-foot-10 frame, Jerebko — in theory at least — fits the profile of the ideal defender who can make life difficult for Anthony in five-to-10-minute stretches come playoff time. It’s eerily similar to how Jason Collins has thrived for years as the “Dwight stopper” despite having limited value to other teams outside his post defense on one elite player.

And given that the Pacers will likely face the Knicks at some point this postseason (likely the second round) and with the uncertain status of Granger’s health, they lack a reliable foil to Anthony. Even in Granger’s absence, Indiana has no use for Gerald Green, a player with a contract that is virtually identical to Jerebko’s. By no means will Jerebko’s presence shift the balance of an entire series, but should he influence the outcome of even a single game, it would be well worth making the deal.

About Last Night: Lakers Win One for the Doctor