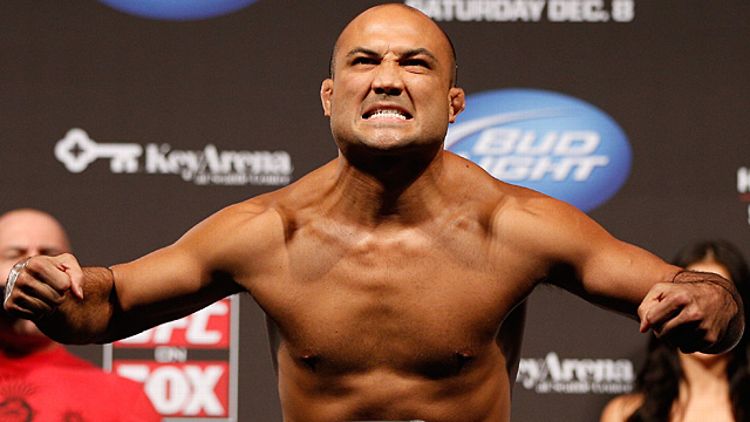 Back in January of 2009, my friend Rick traveled to Las Vegas with some business associates to attend UFC 94. Living in San Francisco, just a short flight away, I decided to visit my old college buddy and reminisce about decades of miserable Vikings football (our favorite team) and our college fraternity’s tireless service to the community. Oh, and to gamble. That, too.

I enjoyed the UFC promotions back in the 1990s but stopped following as intently last decade. The sport’s public-relations battle seemed insurmountable — that unfair “human cockfighting” stigma wouldn’t go away, especially with the mainstream media, and the frequency of the pay-per-views made it tough to follow the sport casually. So when Rick and his friends said they had an extra ticket because of a no-show, I was secretly apathetic about joining them. My apathy moved to illness as I pulled out my wallet to cover the cost.

“What the heck, I used to follow UFC. How much to make your friend whole?” I asked.

That night, Georges St-Pierre was defending his welterweight belt against lightweight champion B.J. Penn, making it the first time that two reigning title-holders were meeting in the Octagon. The UFC 94 marketing machine ran its conveyor belts, spending $1.7 million on a UFC Primetime show promoting the rematch (St-Pierre had defeated Penn via split decision at UFC 58 in 2006) and adding hometown publicity tours in Montreal and Hawaii months before the event. The result? A thunderous crowd waving Hawaiian and Canadian flags amid alternating chants of “GSP! GSP!” and “B.J. Penn! B.J. Penn!” Better still, this oscillating chorus took place between the fights prior to the main event.

When the lights faded before Penn’s entrance to the arena, there was a rare synchronicity of attention awaiting his hallmark music. GSP fans may have tried to resist, but that melodic ukulele lamenting the loss of Hawaiian independence pulled everyone into the moment.

You can’t tap your foot to Penn’s entrance music (and good luck trying to sing along), but you can impress strangers by cranking “Hawai’i ’78” when entering a crowded room.

What happened? St-Pierre dominated Penn for four rounds, with Penn’s corner stopping the fight before the fifth. The rematch fell short of matching the excitement of an otherwise excellent card, but ensuing controversies kept UFC 94 in the news long afterward. A superstitious few believed that Penn had been cursed even before entering the Octagon by L.A. rapper Mickey Avalon’s “kiss of death.” I still kinda buy that. Others believed St-Pierre’s corner cheated by rubbing Vaseline on the champion’s shoulder, back, and chest to neutralize Penn’s formidable jiu-jitsu. Even UFC president Dana White expressed his “Grease-Gate” concerns at the end of the fight.

The Nevada State Athletic Commission ultimately decided against taking action against St-Pierre, deeming the Vaseline incident inconsequential and unintentional. And yet, the commission later instituted the “B.J. Penn Rule,” tightening restrictions on foreign substances and enabling officials to assess fouls. For me, UFC 94 was a Michael Corleone/Godfather III moment — I found myself fully pulled back in to the sport I thought I had left behind. Strangely, the vanquished can sometimes be more fascinating than the victors. Losing raises questions, prompts introspection, and rekindles fires in athletes seeking to find answers. As a Vikings fan and de facto aficionado of profound, life-questioning disappointment, I found myself drawn to Penn. But before jumping onto another damaged bandwagon, I wanted to kick the tires.

Penn earned his black belt in just three years, becoming the first American to win the black belt division of the Mundials (World Jiu-Jitsu Championship) at just 21 years old. He’s one of two fighters to have won UFC belts in two different weight classes. As for personal intrigue, Penn’s video blogs are a priceless glimpse into his diet, training, and life in Hilo, with some unedited segments yielding comedic moments such as the question herein from Phillip:

While Penn’s earlier victories against Sean Sherk, Jens Pulver, and UFC Hall of Famer Matt Hughes were impressive enough, his willingness to fight middleweights (Rodrigo Gracie) and even light heavyweights (Lyoto Machida) catapulted him into a different category entirely. Unlike so many current mixed martial artists who turn down fights to protect their records, Penn’s fearlessness won him the eternal respect of UFC fans.

Speaking with the media recently, Penn said it was somewhere after UFC 94 that people started referring to him as a legend; he says he felt that meant that his time had passed, and he found himself reflecting on that notion. Were his critics right? Had an over-reliance on natural ability (and, by proxy, a lagging dedication) been the difference in those rare defeats? Would a renewed focus allow Penn to reinvent himself, maybe make the next chapters of his career just as legendary as everything that came before them? And could the key, moving forward, really be as simple as a sensible breakfast?

Whatever the resolution, Penn returned to the Octagon twice in 2009 with dominant title defenses against Kenny Florian (submission) and Diego Sanchez (TKO). Just when we were considering him an elite fighter again, Penn stumbled to a 1-3-1 mark in his next five fights, beginning with two unanimous-decision losses to lightweight Frankie Edgar, then a punishing loss to welterweight Nick Diaz that left the Hawaiian’s UFC future in question. An emotional Penn told Joe Rogan following the Diaz fight that he was finished, but there was no sense of closure, not for a fighter still in his early 30s. Less than a year later, Rory MacDonald’s challenge to Penn presented him with the near-perfect opportunity to solidify his legacy and scoop a Jenny Craig Groupon before Penn’s alleged 40 percent body fat surged past the baconsphere.

One of the sport’s rising stars, MacDonald embodies MMA’s next generation of fighters, all of whom train in all aspects of MMA from the very beginning of their careers. His close relationship with Tristar Gym in Montreal (home of GSP and head trainer Firas Zahabi) added intrigue to the contest, with Penn anxious to avenge his UFC 94 defeat. But there would be no redemption; youth triumphed over wisdom (and that vintage Hammer Strength press machine). Penn’s loss by unanimous decision was a painful replay of his recent bouts at welterweight (now 1-5-1 since 2006), a division in which Penn’s size disadvantage usually becomes more pronounced in later rounds. But if returning to lightweight means eating plankton rations over Honey Bunches of Oats, a wardrobe change is doubtful.

Dana White’s postfight comments about Penn — specifically Penn having nothing left to prove — was both an acknowledgement of the great fighter’s accomplishments and a less than subtle take on his future. But encouraging Penn’s retirement leaves a widening void in an organization already missing Chuck Liddell, Randy Couture, and Tito Ortiz, three influential retired stars whose personalities became interwoven with UFC brand. Penn’s earnest personality and approachable demeanor made him a fan-favorite, regardless of his win-loss ledger in recent years. Mixing in just the right amount of bravado, you could argue that he stole the media blitz leading up to UFC on Fox 5 two weekends ago, becoming more important to the card than the main event. By any indication of the crowd noise, Seattle’s KeyArena was unequivocally yearning for a Penn victory.

As for MacDonald, it’s fine to dress like the Talented Mr. Ripley, but exuding the warmth of a Festivus pole won’t sell tickets (I don’t care how good your Patrick Bateman impersonation is). MacDonald’s comfort with the media should improve, but you’re still not going to let him house-sit for you. It’s just hard to connect with him. And that’s what made Penn’s career so unique — whether he was winning or losing, you always felt invested in the result.

Penn’s place among the best fighters ever might matter to pundits (and even to Penn), but it doesn’t matter to his fans. They’ve already returned their verdict — he’s one of the best — and won’t waver no matter how many awkward comebacks might be left. And if you’re measuring him historically, then this fact has to mean something: During the third round against MacDonald, B.J. Penn re-took the record for the longest amount of time ever spent in the Octagon.

Surely, that’s a milestone likely reserved for a legendary fighter, fading or not.