Ryan Howard Listens to Tyga, and Other Revelations Surrounding the At-Bat Music of the Phillies 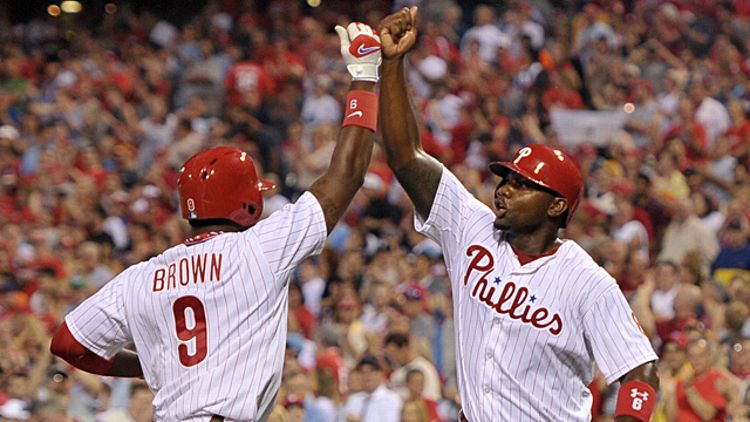 You’re really limiting yourself if “What would you use for at-bat music?” is the sort of thing you only talk about with your drinkin’ buddies. It might be the single most insightful query you can ask in any situation: first date, job interview, interrogation, loan request, doesn’t matter. It’s how you really get to know someone, as you’re essentially getting down to the fundamental concepts of identity: who are you, and how do you want to present yourself to the world? Do you want to intimidate people? Make them laugh? Indicate that you’re a man of unusual virility?

Sadly, it’s more interesting to talk about in theory because the actual employment of at-bat music tends to be extremely dull. This is a result of (a) baseball players having by and large galling taste in music, and (b) statistical backup to prove whether their at-bat music makes them full of crap.

I’d wager that there is no team in Major League Baseball more delusional than the Philadelphia Phillies, and they have the at-bat music to prove it. Like many of MLB’s big-money teams, the Phillies are hovering near .500, but unlike the Angels or the Dodgers or the Blue Jays, they don’t have the excuse of a major free-agent haul needing time to jell or whatever. Quite the opposite: If you celebrated the Phils’ 2008 World Series with a daring Peanut Butter Kandy Kake and Yuengling binge that triggered a diabetic coma just lifting in April, you’d wake up totally stoked about them keeping basically the same lineup to defend the title. And you’d be additionally pumped to find out they acquired Michael and Delmon Young and kicked that jerkoff Pat Burrell to the curb.

But obviously, this ain’t 2009 and Chase Utley, Ryan Howard, Carlos Ruiz, and Jimmy Rollins are walking through that door. And that ain’t good. Thanks to the good people at Designated Hits, the most comprehensive database of at-bat music I’ve seen, you don’t have to wearily sit through Cole Hamels pitching eight quality innings in a 2-1 loss to the Nationals in order to realize that the Phillies’ anemic offense is setting themselves up for failure simply by the music they’ve chosen to represent them.

It’s not an issue endemic to the team as a whole. Delmon Young goes with “John Doe” and “King of Diamonds” because he wants to offset his worthlessness as a baseball player with an appreciable love for the extreme deep cuts from Rick Ross mixtapes. And then you have Carlos Ruiz picking Phil Collins’s “In the Air Tonight,” which leads me to believe that he’s killed a man.

But otherwise, the entire Phillies lineup could likely stand to literally change their tune.

Look, the way he’s swinging the bat, I suppose Brown can play Blessid Union of Souls’ “Hey Leonardo (She Likes Me for Me)” for all I care. That being said, a night at the ballpark is still intended to be a family affair. If you edited every line of questionable content in “Pop That,” you would end up with “4’33.”” Even beyond the title of this song triggering connotations of warning-track power and subsequent LOB, what exactly is Brown trying to tell us here? That he’s the one player in Major League Baseball that wouldn’t mind being traded to Miami?

Recommendation: Man, remember when he used “Who’s That? Brooown!” back in 2010? I miss Das Racist. I miss “Domonic Brown, can’t-miss prospect.” I miss the Phillies being a playoff lock simply for being in the same division as the Nationals, Mets, and Marlins.

In 20 years, I imagine Phillies fans will be able to look kindly upon the Ryan Howard era. I’m pretty sure his contract is up by 2033, and if so, we’ll remember the good times: 40-homer seasons easing the transition out of the Jim Thome period, livening up Subway commercials as a ham as artificially sweet as their own, being granted the nickname “Scrapple Dun Dun” by my friends and me because we decided he needed the most Philly nickname possible.

But judging from his current at-bat music, Howard is a terrible, terrible human being. Drake’s “Started From the Bottom” is an inherently trollish song, albeit one made by a rapper whose career arc is still ascending. And here’s Howard, a guy whose $20 million salary not only makes Drake actually seem poor by comparison, but who has the most untradable contract in baseball and is going to screw the Phillies over for the next decade. It was sketchy when he signed it, but after he celebrated it by popping his achilles tendon as opposed to World Series champagne? And he’s rocking a .294 OBP right now. He doesn’t even deserve Fountains of Wayne’s “Sink to the Bottom,” I don’t want him ruining that too.

As for the other track, Ryan Howard (a) listens, I mean really listens, to Tyga, (b) might owe his high-wattage smile to MDMA abuse, and (c) thinks Philly fans won’t notice that HIS AT-BAT MUSIC IS A TYGA SONG ABOUT TAKING MDMA. Or he thinks Rick James’s “Mary Jane” is actually about a woman.

Recommendation: Look, if he wants to convey that he’s a Drake fan and he’s curious about drug use, go with “Marvins Room.” The entire Phillies season has been about as uplifting.

Not gonna lie, when you hear that riff, you just know something badass is about to go down. Problem is, I always figured this song condoned domestic violence, and Lee’s a guy who supposedly turned down the Yankees because he didn’t like the way his wife was treated at a playoff game.

Recommendation: The Phillies should be trying everything possible to inflate his trade value and make it clear he’s not what his W-L record says he is. In a seamless merger of advanced sabermetrics and undying devotion, the only real choice is Babyface’s “Whip Appeal.” You rock a 1.01 WHIP, you deserve to rock with the best.

Thanks to “Hip Hop Hooray” being one of the eternally acceptable selections of bar mitzvah rap, Naughty by Nature’s name will ring bells as long as Jewish kids turn 13 and can’t afford to actually have 50 Cent or Drake show up. But does Revere really want to evoke Treach, one of the most diesel rappers of all time, someone who may or may not have inspired the entirety of “Whatta Man”? He shouldn’t, not when his power numbers suggest a cheaper, younger version of Michael Bourn and not when he looks like the infamously scrawny Ja Rule.

Recommendation: The fact that this dude’s alternate at-bat music is a Linkin Park side project is all the evidence I need that Revere is fully comfortable aligning himself with white boy rap. As such, Beastie Boys’ “Rhymin’ and Stealin’” should work for the speedster because “Paul Revere” has that one line about a Wiffle ball bat and we don’t need any reminders about how this guy isn’t going to hit a home run in 2013.

Kevin Frandsen is a backup third baseman for a major league team, which means he performs a desperately coveted job at an elite enough level to earn a six-figure salary. But for whatever reason, he’d prefer to remind us that he’s a 31-year-old white male who made sure to finish up those last two classes so he could get his finance degree from San Jose State. And there’s few better ways to do that than to pick a Red Hot Chili Peppers song from Stadium Arcadium, which … I mean, that’s the Chili Peppers album for people who thought Californication worked too blue.

Recommendation: You know what was pretty cool? When Anthony Kiedis goes “heybattabatta, heybattabatta … SWING!” during “The Power of Equality.”

I realize the title isn’t meant to be taken literally, but if I were a platoon outfielder who could get optioned to Triple-A on any given day, this is not the one-hit wonder I’d want to align myself with.

Recommendation: Since “1-900-Hustler,” Philadelphia’s own Freeway has been an inspiration to people in Mayberry’s position, bit players who need to evolve in order to stay relevant.