Road to the U.S. Open Cup: D.C. United and the Philadelphia Union Deal With Drainage 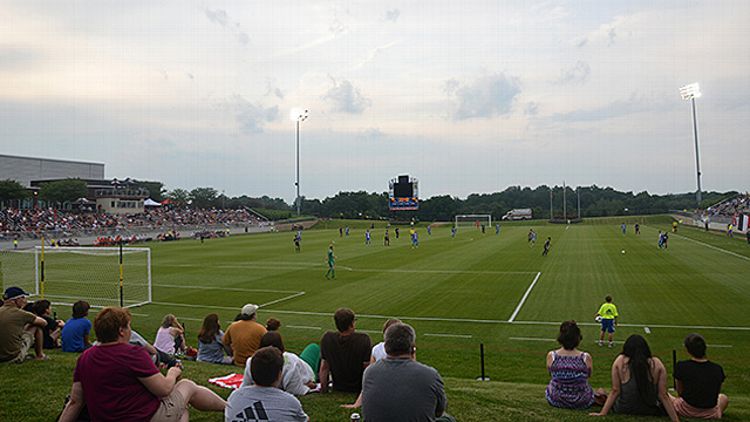 I’m behind the goal line of the main field at Maryland SoccerPlex, and the Philadelphia Union’s Sebastien Le Toux has just walked down the grass bank that serves as a tunnel entrance and stepped ankle-deep into a drainage puddle. I grimace in sympathy as Le Toux gingerly withdraws his foot and jogs around the small marshy patch beside what’s otherwise a beautifully maintained field. He joins the rest of the Union players as they warm up, perhaps hoping this wasn’t an omen.

The Maryland SoccerPlex is a story in itself. My first inkling of its unique qualities came in a trickle of e-mails and tweets when I’d mentioned I was on my way to D.C., messages typically along the lines of “It’s not in D.C. — it’s miles away.” Having negotiated my rental car from Union Station through beltway traffic and Maryland exurban sprawl to get here, I could see what they meant. Even when I reached the front gates, near an illuminated church sign claiming “Jesus was the original undercover boss,” the GPS was still cheerfully telling me “In half a mile, take the second exit at the roundabout.”

If the huge empty stands in Richmond had been the uncanny part of my experience there, here it was the scenery. A succession of fields rolled past, surrounded by landscaped spectator berms, signs warning of safety cancellations for thunderstorms, and a lush, dense line of trees, before I arrived at what the SoccerPlex website claimed was a “natural valley” housing the championship field.

More on the U.S. Open Cup

Kickeroos give D.C. United a scare

On the comeback trail with Danny Szetela

The Brooklyn Italians and Icon FC

As the MLSsoccer.com writer Charles Boehm would tell me this evening, “It’s got that Field of Dreams thing going on.” And looking out over the rolling landscape around us and the pristine field nestled below us, the description makes sense.

At the far end of the field, the hosts are warming up in front of a giant D.C. shirt laid out across the grass berm behind their goal. If it’s possible to infer anything from the body language of warm-ups, D.C.’s players look intent, while Philadelphia’s look workmanlike. Balls are zipping around the surface in passing drills, and judging from who’s working with what groups, it looks like, and will prove to be, another strong D.C. selection.

When the game begins, Jack McInerney, Philadelphia’s in-form striker, gets an early look at a header. For a second there’s a flicker of concern among the crowd that this might be a long fruitless night. D.C. goalkeeper Joe Willis screams at Dwayne De Rosario to pick up the loose man on the resulting corner. (“DERO! 26 LOOSE! ON THE EDGE!”) The captain glances behind him but the corner is harmlessly cleared. As the game unfolds, D.C.’s players begin to move the ball (and themselves) around the field effectively and dominate play.

To those who’ve watched D.C. this season, that most basic of developments counts as a breakthrough. For long stretches of the year, they have looked like a seized-up engine. In the match against the Union, an injury to the veteran John Thorrington and another to his nominal, if not exactly stylistic, replacement Lewis Neal had robbed coach Ben Olsen of a pivot point in his team, and heaped pressure on midfielder Perry Kitchen. As Paul Sotoudeh, a former president of the Screaming Eagles supporters group, will tell me, “It’s not like Thorrington is a magic bullet for what’s wrong with the team.” But as this game unfolds it becomes really clear that not having a player who fulfils his role has hurt his side’s fluidity till now.

That being said, Thorrington is spraying the ball around, linking his full backs and forward runners and generally keeping the tempo up. The players in front of him begin to pick up on these cues and Nick DeLeon and De Rosario are making diagonal runs to confuse the Union defense. The field, too, is playing its part. The game at Richmond had been a much slower slog. As D.C.’s James Riley tells me:

“[Richmond] played on a dry, small field that dictated to their style of play. We were asking if they were going to wet it, grease it or whatnot, just to get it a little faster, but they weren’t willing to do that.”

No such problem tonight. The field is calibrated to United’s needs, and they duly open the scoring when a DeLeon shot is charged down into the path of De Rosario, whose first-time shot from distance curls low and firm into the corner of the net. From where I’m standing it looks like De Rosario gives his usual slow-motion monster-stomping celebration a pass. It’s maybe not the right game. Maybe not the right season. His own disenchantment with how he and the team are doing has been made public, and his coach has even benched him on occasion to try to spark a response. It’s a risky strategy. De Rosario has never been shy about expressing his feelings on how he’s being managed, whether it’s celebrating goals with a signed-check mime at his bosses in Toronto, or telling me and others this preseason that his former coach at New York, Hans Backe, “had all the tools — he just didn’t know what to do with them.” But in Olsen, De Rosario has a coach who, while they may butt heads, understands what drives him.

If the team still looks a little tentative as the game drifts deep into the second half, that’s perhaps understandable after such a poor run — belief is low. The crowd seems to sense this, too, and it produces a moment of bleak humor: As the tension drains the stadium of volume, the D.C. fans start a chant of “Awkward silence!,” only to be met by the Union’s traveling Sons of Ben contingent responding with “Awkward season!” I wander over to that side of the stadium just in time to see a large, visibly disgusted police officer telling an equally large shaven-headed supporter among D.C.’s Barra Brava, “I’m not going to repeat what he said, but he said it and there’s kids in the rows behind you.”

As the game heads into its last quarter it bursts into life. First, a slaloming DeRo dribble into the box looks to have been checked by a tackle, until he pushes the ball into enough space to slide a shot coolly home. D.C. barely has time to enjoy its cushion, though, as McInerney, who’s been kept quiet all night, shows how dangerous he is by cutting onto his right foot on the edge of the box and finding the corner of the net.

Pressing for a late tying goal, Philadelphia moves to four up front and is applying pressure, but it’s leaving it vulnerable at the back and De Rosario is in the mood. As Zac MacMath in the Union goal jogs out to meet a fairly routine stray ball, De Rosario is already sprinting toward the D.C. half. By the time MacMath has squared the ball to the luckless Jeff Parke, the D.C. man is already on him. He dispossesses Parke as he shuffles the ball off his weaker foot and shoots from near the center circle with the goalkeeper stranded. It’s 3-1, and De Rosario turns and runs toward his bench while tapping his temple at Olsen.

And that will be that. The players wearily make their way up the grass bank behind the D.C. goal, and up the winding path to the covered sports barn that’s the heart of the complex and home to their locker rooms. A makeshift D.C. backdrop is thrown over the side of a bleacher for the filmed pieces, and players from both sides mingle among travel bags, journalists, and makeshift pizza tables in the harsh glare of the barn lights.

Kevin Payne, the former D.C. executive now with Toronto, is among the melee. His new team will meet his old team this weekend and will be beaten, as United, now possessing a glimmer of belief, snap their long MLS winless streak and begin the slow process of salvaging their season. For now he chats quietly with D.C.’s current GM, Dave Kasper, with that kick-starting game still in their future. “I honestly believe the playoffs are not beyond us,” Olsen will tell me later. For now the Cup seems more attainable, but this has been an important night for the team. As Philadelphia drives off through the trees, D.C. is still alive in the natural valley.

Were Any Long-Term NHL Contracts a Good Idea?

Deal Report: The Clippers Load Up on Shooters, Bledsoe Finds a New Home, and the Bucks Make Us Sad