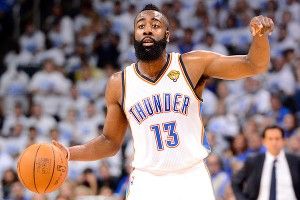 By the time the buzzer mercifully sounded in Game 5 of the NBA Finals, the narrative for the Oklahoma City Thunder had already shifted. Previously a litter of precocious cubs, they are now full-fanged predators, expected to hunt down the ultimate prey. Outside of winning games, the foremost challenge will be keeping their brilliant nucleus intact over the next two seasons. As the team’s four young stars simultaneously enter their prime, it won’t be easy.

Kevin Durant’s tears hadn’t even dried when fans and analysts began cleaving the Thunder apart by way of free-agent flight and salary-cap casualties. Yet, in late August, the Thunder took a crucial step toward self-preservation by extending the contract of Serge Ibaka, their lanky flyswatter of a power forward. At four years and $48 million, the deal is a bargain — about $10 million less than the market rate for an evolving young big man.

The more complicated order of business is figuring out how much precious cap space the Thunder can dedicate to James Harden with Ibaka, Durant, and Russell Westbrook already under contract.

Whether or not you believe the Thunder should pony up for Harden is likely indicative of your opinion toward modern statistical analytics. We don’t know what is being pored over in Mark Cuban’s secret undersea microfiche collection, but there are enough numbers floating around blogs, data aggregators, and IRL conferences to convince even novice stat-heads that there are ways to evaluate Harden beyond the box score or even his public wilting in the Finals.

By win shares per 48 minutes, only LeBron James, Chris Paul, and Kevin Durant contributed proportionally more to their team’s victories than Harden did last season. He was also second in the league in both true shooting percentage and effective field goal percentage (topped only by Tyson Chandler, a center who mostly jams the ball into the hoop from six inches away).

In baseball, Kevin Youkilis was embraced as the Greek God of Walks. But in the NBA, the disconnect between what we anecdotally witness and what we can statistically quantify seems more yawning. Oh, gawky goofus Bulls center Omer Asik had one of the best defensive ratings in the NBA last season? And Kevin Martin is usually a tremendously efficient scorer, despite a career shooting percentage of 44 percent? It’s not surprising some basketball people disdainfully regard advanced analytics as soulless mathematical chicanery perpetuated by victims of atomic wedgies.

Two years ago, I spoke with Allan Houston — now being groomed for the Knicks’ general manager position — and he explained that LeBron James was not the best player in basketball because he had yet to win a championship. Instead, Houston fingered Kobe Bryant, who has won a fistful. It was surprising to hear someone in line for such an influential position present an argument with the same nuance as a YouTube troll. Very nice guy, though!

Those kinds of Paleozoic truisms are thankfully perishing, mostly because we’re getting a better understanding of the traits that contribute to effective basketball. Case in point: the mid-range jumper. Long considered a valuable piece in the gorgeous offensive repertoires of versatile scorers like Bryant and Carmelo Anthony, the wisdom these days is that taking mid-range jumpers contributes to losing basketball games. They’re not high-percentage shots, they rarely earn foul calls, they only count for two points, and they’re unlikely to create offensive rebounds.

Now let’s bring back Harden, who, unlike Anthony, has never been a guy regarded as someone a franchise should airmail half its roster for. While he rarely bears the same offensive load as Anthony or Bryant, he’s a vastly more efficient scorer than either of them. If we look at true shooting percentage — a number weighted for field goals, free throws, and 3-pointers — Anthony and Bryant both shot about 53 percent in 2012. Harden shot 67 percent last season — a number that towers above the career bests of both Anthony and Bryant (neither has ever notched a TS percentage higher than 58).

Beyond the Euro-Step and shameful flopping, Harden’s game most closely resembles his Argentine doppelgänger Manu Ginobili: Half their shot attempts are 3-pointers, they attack the basket seeking contact, and they rarely settle for mid-range jumpers. Harden is so absurdly adept at drawing fouls that he makes one free throw per every two field goal attempts — nearly twice the rate of Bryant.

In extra-point percentage, a stat that measures how frequently players shoot 3s and FTs, Harden and Ginobili were, respectively, second and fourth in the league last season. Die slow, mid-range jumpermongers!

Is Harden better at basketball than Kobe and Melo? Probably not. Efficiency and usage rating (a percentage of team plays used by a player when he’s on the floor) are negatively correlated, and Harden is asked to dominate the ball far less than either of them.

Still, when Harden does have it, he’s more effective in a game that rewards free throws and 3-pointers while punishing missed mid-range jumpers. When you look at how the Thunder dispatched opponents last year, Harden’s fingerprints are all over the murder weapons. Oklahoma City was first in free throws made per field goal attempt, second in effective field goal percentage, and second in offensive rating. Harden might be the third option, but even on a team with Kevin Durant, he tops all three of those categories, and cutting loose the man whose DNA interlocks most closely with the team’s genetic code is unwise.

The Thunder have until October 31 to extend Harden’s contract or risk having him become a restricted free agent after the season. Last week, Kendrick Perkins told reporters that a deal was imminent; a day later, Harden’s agent insisted his client was looking for a max deal. Sam Presti, the Thunder’s general manager, is no fool. He’s fully aware that a horde of number-crunching rivals have their checkbooks out, eagerly waiting to make James Harden the latest prize in basketball’s revenge of the nerds.