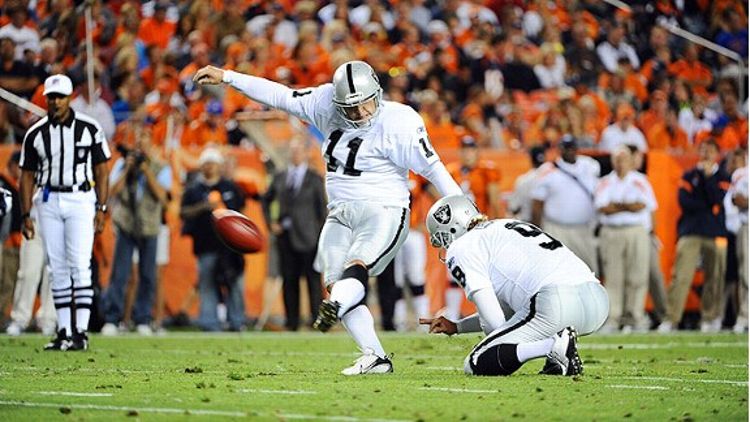 As Oakland Raiders kicker Sebastian Janikowski hit his third 50-yard field goal in as many quarters Sunday, Grantland editor-in-chief Bill Simmons posed a question to those in attendance:

“Is it time to reconsider how bad of an idea it was to draft him in the first round?”

Reaction was mixed. And, personally, I was not convinced. That’s what made the e-mail I received on Monday all the more confusing.

I explained that there must be some mistake. I did think it was ridiculous.

Protesting clearly didn’t really do much good. Because here I am, defending what has been called the worst pick in the history of the NFL Draft.

Janikowski was arguably the most Raiders-friendly kicker ever when he came out of Florida State in 2000. In college, CBass combined oversized talent (the only two-time winner of the Lou Groza award) with an oversized propensity for legal reprimand (including an arrest for attempting to bribe a police officer). In an uncharacteristic move, Al Davis fell in love with a player who does one thing incredibly well, and Janikowski went 17th overall, just the third kicker ever to go in the first round. The top half of the 2000 draft was a relatively strong one, netting Brian Urlacher, LaVar Arrington, and John Abraham. Janikowski was wedged between Julian Peterson and Chad Pennington, and was taken two spots ahead of Shaun Alexander. That sentence alone is enough to damn the Polish Cannon. The Raiders had a Pro Bowl quarterback in Rich Gannon, but a future MVP would have been a slight improvement over the prolific duo of Tyrone Wheatley and Napoleon Kaufman. Keep moving down the list, however, and things get pretty grim. Do you know who R. Jay Soward is? Because I sure as hell don’t.

Of the players taken after Janikowski in the first two rounds, only a handful are currently on active rosters. More than one-third were out of the league within five years, and only one — Keith Bulluck — went to the Pro Bowl.

Before digging into it, I figured that Janikowski’s major edge on the rest of the league would come on kickoffs — the assumption being that the guy routinely pounding 50-yard field goals also makes a habit of putting it out of the back of the end zone. And I was right … sort of.

Janikowski is decidedly above average, but the advantage isn’t overwhelming. He ranks third in touchback percentage over the past 10 years, and only Olindo Mare has more total touchbacks in that span. Last season, with kickoffs still coming from the 30-yard line, Janikowski finished fourth (31.2 percent) in touchback percentage, three spots behind kickoff cyborg Billy Cundiff (50.6 percent).

CBass’ real value comes in what the conventional (and video game) wisdom would assume. In support of Simmons’ claim, Jay Caspian Kang argued that Janikowski’s massive leg grants the Raiders opportunities to manipulate their game plan in ways other teams can’t. If Oakland can throw on 3rd and 14 from the 37 because the team’s kicker routinely hits from 54 yards out, some of the pressure is lifted off both its offense and its coach.

Since 2001, no one has made more field goals from 50+ yards than Janikowski, and with some parsing, it’s reasonable to conclude that no one has hit them more efficiently. Janikowski’s percentage on such kicks is 56.9 percent, about three percent higher than the league average over that span. But the problem with relying on raw percentages is that Janikowski’s efficiency is hurt by the amount of field goals he attempts that no one else would even consider. Janikowski has attempted 58 field goals of 50+ yards since 2011, 11 more than any other kicker. Nate Kaeding, the most accurate kicker in NFL history, has never attempted more than five 50+ yard field goals in a season. Janikowski has tried six in five weeks.

Removing all of his attempts of at least 54 yards, his percentage since 2001 rises to 85.6. Elite accuracy combined with the threat of anything from 63 and in means that no field goal kicker in the league (aside from maybe Jason Hanson, who’s connected on 66 percent of his 47 kicks from 50+) provides as much value as Janikowski. With the kicking carousel that teams like the Cowboys and Jets have been on in the past few seasons, having a sure thing in the kicking game is a welcome asset. I’ll admit that I’m probably cutting a break for the recently departed, but c’mon, it could’ve been Sylvester Morris.

Filed Under: Because Why Not, Bill Simmons, Oakland Raiders, Robert Mays, Things We Made Robert Mays Write

More Because Why Not

See all Because Why Not

Apparently Eli Manning Is 'The Godfather' Of Pranks