Apparently Eli Manning Is ‘The Godfather’ Of Pranks 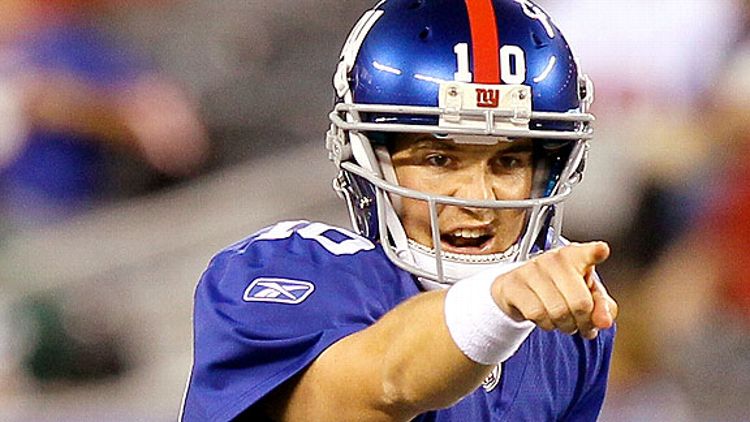 “Eli Manning quietly stole receiver Hakeem Nicks’s cell phone,” the article began, “punched a few keys and when Nicks came back to his locker, the phone’s operational language had been switched to Japanese.” Hicks recalled having to reach out to former Giants wide receiver Steve Smith for assistance in undoing the damage —”Eli did it to him before.”

Sad souls like myself who have earned their Ph.D’Eli recognized the prank. It’s one that he played on his father during the Manning Passing Academy, a summer camp for high schoolers: “As always, Archie was the foil of [the Manning brothers’] practical jokes, like the time Eli changed the language on his cell phone to Japanese.”

Other times, he has opted for Romance languages. An ESPN the Magazine story written shortly after the Giants won Super Bowl XLII notes that “one of Peyton’s and Eli’s favorite pranks is stealing cell phones and changing the interface language to Spanish or French.” “The worst part,” says Jared Lorenzen, Eli’s former backup, “is that you have to know Spanish to figure out how to change it back.”

Lest you think Manning is a one trick pony, though, think again. A 2008 Esquire interview with Giants beat writer Ralph Vacchiano gave a more wide-angled look at Eli’s artillery: “From what I can tell, most of his pranks are kind of routine — hiding car keys (or in some cases, entire cars), stealing clothing, putting Tiger Balm in underwear, itching powder in socks, purple dye in gloves or a helmet.” (Eli must have a thing for purple — Alan Sepinwall wrote earlier that year that he once “replaced all his offensive lineman’s shoes with purple ones.”)

Eli’s arsenal also includes much towel-related mischief. The Wall Street Journal article has him taking Victor Cruz’s towel, soaking it in water, and hanging it back up, or spraying Travis Beckum’s with liquid soap. Far more sinister was a prank he pulled on erstwhile teammate Plaxico Burress, written up in a 2007 New York Times piece: “‘My towel was on my seat, and he got out of the shower and sat down on my towel with his bare bottom,’ Burress said. ‘Everybody started laughing, and I came over and picked the towel up. I was going to wipe my face on it and everyone said, ‘Don’t do that!'”

Particularly vulnerable to Eli’s masterworks are his backup quarterbacks. At Ole Miss, Eli’s backup quarterback and road roommate David Morris recalled putting his hand in his warmup pockets and finding “a handful of pickles,” then putting on his dress shoes only to find “salami stuffed inside them.” (Morris retaliated by hiding cold cuts in the pocket of Manning’s football notebook.) And as Seth Wickersham wrote in ESPN the Magazine, when Andre Woodson, a rookie backup QB for the Giants, came late to the weight room one day, Eli got a towel boy to empty his locker and leave a note: “Come see me in my office. -T.C.”

Eli has the cunning ability to convince others to help carry out his plans. Wickersham calls him “legendary at conceiving pranks and enlisting equipment managers to execute them,” adding parenthetically that “Eli’s nickname is The Godfather.” Who would have thought?

There certainly are some sociopathic-seeming tendencies to Eli’s evil doing. Namely: Far from seeking instant credit for his work, he seems perfectly happy to let his victims languish in psychological uncertainty. When Michael Lewis wrote a New York Times Magazine feature on Eli in 2004, he noted that when Eli’s father, Archie Manning, visited Eli in college, he would often go around tidying up his apartment. “What Eli would do, just for kicks, is quietly follow his dad around the place and reverse the process. Dropping the same magazines back onto the floor, messing up the same papers, etc … his dad would clean the same magazines two or three times before finally noticing that he’d already done it.” (You can’t blame Cooper Manning for treading lightly whenever he’s around his kid brother: “You kind of look at your toothbrush every morning and think, ‘Okay, what did they do with this?'” he said in 2007.

More unsettling in their thorough commitment and long-term impact are another pair of stories, one from back in Eli’s college days and the other from just after the Super Bowl. Langston Rogers, the former senior athletic director for media relations at Ole Miss, recalled that a few nights before the Heisman Trophy ceremony was to take place in New York, he “found himself standing in the bushes outside of [Manning’s] hotel room in Orlando” after receiving a phone call, allegedly from the hotel’s front desk clerk, that Manning was in the lobby and “appeared to be drunk” and “incoherent.”

Unable to find Manning in the lobby, “I go outside, step through bushes and I’m looking through Eli’s window,” Rogers said. “If people saw me, they had to think I was a peeping Tom. It’s a wonder I didn’t get arrested. I thought he might be in the bathroom. Then I thought he might be in jail. I’m literally shaking. I kept thinking what Olivia told me a few days before. She said, ‘Take care of my baby.’ I didn’t sleep a wink the rest of the night.” (Eli turned up the next morning, of course, “bright eyed and dapper”; apparently his mother had been in on the joke. Rogers didn’t learn he had been pranked for several weeks.)

NFL Films producers weren’t so lucky as to learn that they’d been had. Alan Sepinwall wrote that in the Super Bowl XLII installment of the “America’s Game” series, Eli was interviewed on-camera as saying “I’m not superstitious, but I am a little ‘stitious. I know that’s not a real word, but it’s my own little saying.”

While that does indeed sound like something the quarterback might say, Sepinwall explained that it was ripped from a Michael Scott line in an episode of The Office. That was lost on NFL Films producers and on narrator James Gandolfini: “later in the episode,” Sepinwall wrote, “Gandolfini repeats the line with all the gravity of John Facenda referring to the frozen tundra of Lambeau Field.”

Of course, Eli himself has been the victim of pranks — Plaxico Burress, upon finding his socks missing in 2005, vowed to put grapes in Eli’s shoes, and in 2008, Manning’s wife Abby was reportedly NOT happy when teammates got a hold of her husband’s phone during family visit day and texted her “Please come, it would really mean a lot to me.” (Can you imagine the look of puppyish confusion on Eli’s face when she showed up?) And yesterday’s Wall Street Journal piece says that during a recent walkthrough, someone taped “an alternative name … inappropriate to print” on the back of the quarterback’s jersey, leading Tom Coughlin to query, “Who did this?” (I think we can all imagine the look on his face.)

But beware: the man known as “The Godfather” knows how to retaliate.

“Eli is the real notorious one,” Vacchiano told Esquire. “His retribution for pranks is apparently swift and evil.”

Can the Philadelphia Eagles Fly Right?