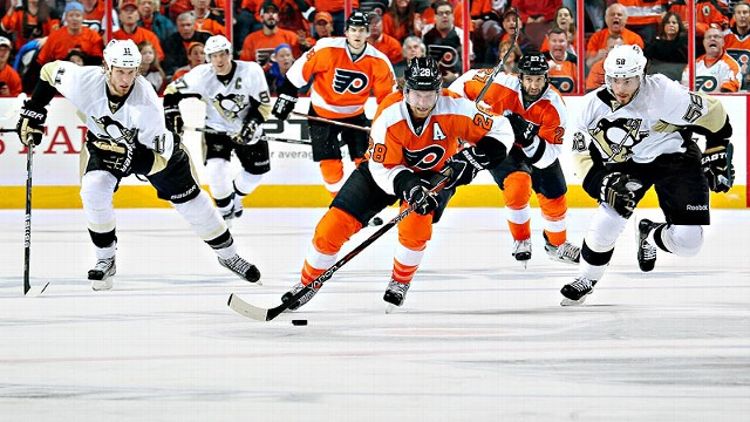 1. Claude Giroux: All Claude Everything
I am obligated by William Penn blood oath to award any Philly athlete the top spot in Rankonia, but Sarah Larimer really makes a compelling case for the Flyers forward: “Katie Baker is right. It is pretty much impossible to dislike Claude Giroux. Apologies to that Monet bro, but Giroux is now my favorite dude named Claude. Let’s all start a Claude Giroux Fan Club. We can get T-shirts that say ‘Are you taking this faceoff here?’

“On Sunday, Claude Giroux told Flyers coach Peter Laviolette that he wanted to start against the Penguins in Game 6. Then, this happened:

“‘Before they even dropped the puck, he came over and he told me watch the first shift,’ Danny Briere said after the Flyers’ 5-1 win. ‘When he did, I didn’t know what to say to him. He’s been our leader all year and once again he took another step in that direction today. It was simply amazing, plain and simple. He was possessed.’

“Check out THAT on NHL.com, Steve Ott!”

2. Fernando Torres: THAT … WAS A GOAL
Brian Phillips’s favorite storm has always been El Nino: “I mean obviously, obviously, obviously Fernando Torres. He’s scored like one goal since the early Cretaceous Period, he’s brought on essentially as a defender to help wee precious underdogs Chelsea cling to life with 10 men against Champions League bullies Barcelona, and he somehow breaks free to score the open-net dying-seconds-of-the-match goal that seals Chelsea’s passage to the final, prompting every commentator on earth to simultaneously opine that the £50 million transfer fee Chelsea paid for him was worth it. In the heat of the moment I tweeted ‘PELVIS-SHATTERING TORRES LOLGASM,’ and I stand by that.”

3. Bobby Valentine’s Smirk of Doom
Dan Fierman takes a minute to stop being mad about Ben Affleck’s accent in The Town to start being mad about the Red Sox manager’s facial expression: “Whether he’s throwing the rock of the team under the bus in a media session, yo-yoing the most promising young pitcher on the staff between the rotation and the bullpen, or merely being booed mercilessly on the 100th anniversary of his new home park, his expression never changes. Is he amused? Seething with contempt? Functionally brain damaged? Impossible to know. And now that I have smashed my television after watching last weekend’s Yankee series, I will never find out.”

4. Mickey Loomis, Private Detective
I don’t know what someone in the New Orleans Saints organization did to someone else, but, man alive, the Saints are getting AIRED OUT this offseason. First the whole KILL THE HEAD drama, and now we get reports that state police are investigating whether Saints general manager Mickey Loomis had bugged the visitors’ locker room in the Superdome. Saints interim coach Joe Vitt has called the allegations “ludicrous” (they probably are), adding, “That’s something from Star Wars.” (You should rewatch Star Wars, Joe Vitt.) I can’t wait to find out what the Saints did wrong next. Did they have a spy dressed up as a jug of Gatorade on the opposing team sidelines to listen in on all that strategic banter? Did they have a comments box installed in the visitors’ locker room with cards that said, “Tell Us How We’re Doing (And Tell Us Your Game Plan While You’re At It”)? State police? C’mon, son.

5. Brian McKnight: Ratchet & Blues
Rafe Bartholomew nominated this veteran R&B signer, who has made something of a change in career direction this week. There’s really no way for me to get into what makes this hilarious without getting in trouble, so just discover it for yourself. I should warn you that the video you’ll find is probably not safe for work, but it is definitely not safe for any previous ideas you had about Brian McKnight.

6. Alistair Overeem: Clean Getaway/Dirty Drug Test
If you’re gonna fail, Bill Barnwell would appreciate it if you fail in style: “Let us celebrate UFC heavyweight Alistair Overeem, whom Dave Meltzer documented in a piece for the site last week. Overeem failed an out-of-competition drug test at a press conference promoting his upcoming title fight with Junior dos Santos, but new evidence has emerged and forced his move into the world of Rankonia. It’s not just that Overeem failed a drug test; it’s how. On the day of the press conference, Overeem was told that he would be forced to take a drug test shortly after the conference finished. He responded by doing the press conference and then fleeing the scene in his truck, perhaps hoping that the athletic commission might simply forget about him and move on. Alas, after telling Overeem that a missed drug test was equivalent to a failed drug test, the Dutch star returned and was found to have a T/E ratio in excess of 10:1. Sorry, dude!”

7. Arkansas Football: A Commitment to Excellence
Michael Weinreb has “Woo Pig Sooie” tatted on his belly like Tupac had “Thug Life.” Take it away, Mike: “Arkansas football hasn’t been this potentially fascinating since Lou Holtz was making threats on his own life. Bring us into halftime, John L. …

8. Nigel Reo-Coker: Oh Captain, My Captain
Bolton is probably going to get relegated from the Premier League. Nigel Reo-Coker is the captain of Bolton. In previous years, Nigel Reo-Coker bounced from West Ham after he claimed that club left him “hung out to dry,” and bounced from Aston Villa after getting in a training ground altercation with then-manager Martin O’Neil. Given his track record, what do you think Nigel Reo-Coker (I just really like typing out the full name) said when he was asked about his club’s run of bad form? ” ‘Blame this, blame that.’ I think that’s all bullshit. We’re paid to play football; that’s the bottom line.” Someone’s been watching Braveheart.

9. Alex McLeish: Town Crusher
As I was writing the above entry, Bolton beat Aston Villa, effectively pulling the Birmingham club into the relegation battle along with them. Aston Villa’s manager is Alex McLeish, who oversaw the relegation of the other club in the city, Birmingham City, last season. That means in two successive seasons, Alex McLeish could manage both Birmingham teams out of the Premier League. This is a bit of an overstatement, but imagine if the year after Robert Irsay moved the Colts to Indianapolis, he went back to Baltimore, bought the Orioles and removed them from MLB and put them in Triple-A. Truly the pooping in the refrigerator and eating the whole wheel of cheese of football management.

10. DeMar DeRozan: Taking His Ball and Going Home
DeRozan’s line against the Bucks on Monday night: 15 minutes, four points, two turnovers, ejected in the second quarter for throwing the ball down the other end of the court after being called for traveling (:58 into the below vid).