Questions and Answers Surrounding Chip Kelly’s Move to the Eagles 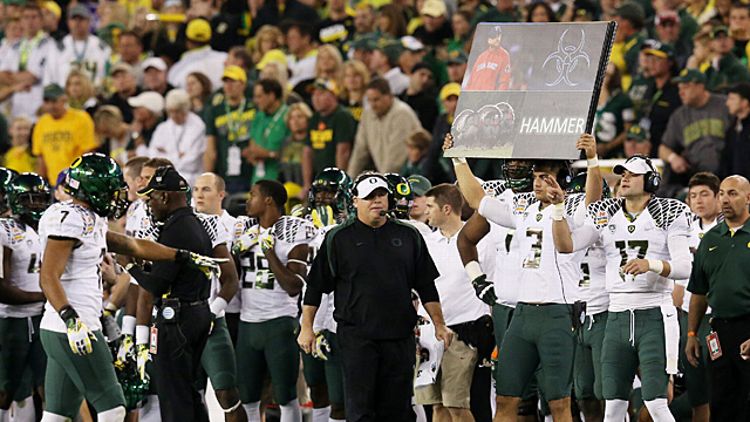 Chip Kelly is the new head coach of the Philadelphia Eagles. This is more exciting than it probably should be; obviously, coaches change jobs all the time. But this feels different, somehow. Kelly is the best contemporary offensive mind in America (that’s an arguable designation, but it’s certainly the argument I would make if you put a gun to my head and started asking bizarre, subjective questions about football strategy). The Eagles are an elite NFL franchise in total disarray, habitually hounded by a fan base that despises everything (including themselves). There are landmines aplenty, all in the form of questions. Here are the main ones:

Why is this happening? The main explanation is that the Eagles likely view Kelly the same way I do — they see him as the best available brain. They continued to pursue him even after he declined their first offer. But there might be something more here: The moment Colin Kaepernick broke away for his defining 56-yard run against the Packers, a debate about the future of football abruptly ended. There is no longer any question over the theoretical value of “collegiate” concepts like the read option. Traditional pro-style offenses still dominate the landscape, but the fastest way to make a bad team average — or, in the case of the Eagles, the fastest way to make an average team good — is to attack opponents the way Oregon attacks the Pac-12. The Bears’ decision to hire Marc Trestman from the CFL seems tangentially connected to this philosophical sea change; the NFL is slowly accepting that it needs new ideas.

OK, sure. But why is this really happening? Probably because the NCAA is going to impose sanctions against the Oregon Ducks (I have absolutely no proof of this, and I hope I’m wrong — but we’ve all seen this scenario before). There’s also some suspicion that Kelly is less popular in Oregon than logic might dictate: While visiting the Pacific Northwest over Christmas, I happened to read a story in the Willamette Week that claimed Duck boosters dislike Kelly’s unwillingness to perform all the bureaucratic bullshit required of modern coaches at major programs (speaking at fundraisers, representing the school at public functions, stroking the local media, etc.). Though the article was considerably less then totally convincing, I don’t doubt the premise. Kelly might have felt curious friction from an Oregon administration unusually willing to part with a guy whose record there was 46-7.

Does this mean Michael Vick now stays in Philadelphia? Probably not (although that possibility suddenly seem twice as plausible as it did yesterday). Vick’s issue is supposedly with Philadelphia’s offensive line; the Eagles’ problems with Vick focus on the amount of money he expects to earn ($32 million over the next two seasons) and the rapid erosion of his skills. He appears to be a man headed for someplace like Minnesota. However, it’s hard not to fantasize about Vick orchestrating Kelly’s Blur offense. Even if he’s lost two steps, a healthy Vick would be a read-option nightmare: How many defensive ends could be reasonably tackle him on the edge of space, one-on-one?

Isn’t this the worst possible offense for Nick Foles? Yes and no. Foles is a 6-foot-6 ectomorph who ran a 5.14 40 at the 2012 NFL Combine. There are certain things he simply could not do in a high-octane, run-oriented offense. But who is to say that the system Kelly used as Oregon will be identical to what he unleashes in Philly? They’ll certainly play faster, but not necessarily in a fashion that’s reliant on the quarterback’s mobility. It might just be a hyper version of how the Patriots operate. Playing at Arizona as a senior, Foles directed an up-tempo, no-huddle spread scheme and passed for 4,334 yards. In fact, it’s possible that Foles was one of the central reasons Kelly wanted this particular job.

What does all this mean for the rest of us? If you’re in a fantasy keeper league and you happen to have LeSean McCoy on your roster, do not let him go, even if your newborn child is in danger.