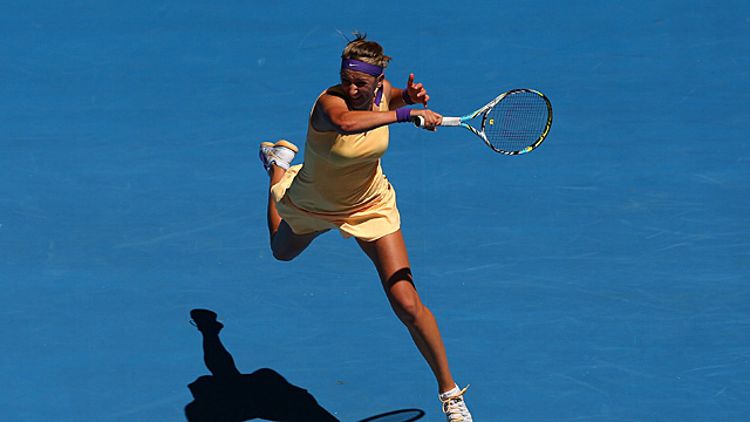 At this very moment, there are no matches being played at the Australian Open. This is true for two reasons: (1) Everyone’s asleep, because it’s early in the morning, and (2) we, the East Coast liberal media elite, need time to write about what happened the day before without the distraction of amazing tennis matches.

The creators of the Australian Open, which is now more than 100 years old, knew that it was hard for American bloggers to write about tennis while tennis was taking place. Sure, writing about tennis is great, but at the end of the day, you’d rather be watching tennis.

Which is why, when the Internet gets ready for bed in the early evening, around 9 p.m. EST, the Australian Open wakes up.

It’s perfect. Sure, you’re kind of always between rounds, never really knowing who is at what stage, but that’s fine. That’s a completely manageable sacrifice to make for writing time, watching time, and (most importantly) no sleeping time.

I got this far because my opponents can’t finish matches, so shout out to my fitness:

(Note: They play each other in the next round.)

YES, BY DEFAULT. But before we get to that, the American casualties:

But then, a glimmer of hope, in the form of Rajeev Ram, who pulled off a first-round win over Guillermo Garcia-Lopez. He has the 12th-seeded Marin Cilic in the second round, which is real bad, but YOU NEVER KNOW.

The only other two American men left, who also happen to be the two top-ranked American players in the field (no Fish, no Isner), Brian Baker and Sam Querrey, both won their first-round matches. They then had to face off in the second round. You hate to see friendly fire, but if it means we’re guaranteed at least one in the round of 32, then it’s worth it.

The end result was doubly unfortunate, however — a Querrey win, due to Baker, devastatingly, tearing his lateral meniscus in the third game of the second set. Not great.

I lost to an unseeded American male in the first round, and now I can’t return to my country.

Despite this beautiful meltdown from Poland’s Jerzy Janowicz, he ended up winning his match against India’s Somdev Devvarman, 7-5 in the fifth set.

My plan for this tournament was to chronicle, from round to round, the triumphant return of childhood favorite Tommy Haas back to dominance. Coming in, he was a 19-seed, impressive seeing as he was a semifinalist in 1999. I was sure he had at least a fourth-round showing in him. At least.

And then he lost in the first round, in five sets.

Tommy Haas Watch over … [takes off backward hat, turns it forward, dumps face in bowl of spaghetti and tears]

Are you related to that person I think you’re related to, Benjamin Becker?

I HAVE PLAYED LIKE 100 SETS, AND IT’S ONLY THE THIRD ROUND, AND I’M STILL IN, BUT I CAN’T FEEL MY LEGS

Djokovic’s cruised to the third round, Federer has Nikolay Davydenko in the second, Nadal’s playing FIFA 2013, and Murray has Joao Sousa in the second.

I TRAVELED ALL THE WAY TO AUSTRALIA TO GET THE DOUGHNUT

Really, ladies? Not a single game?

Really, ladies? Not going to give them a single game? Respect.

The “I’m Victoria Azarenka, No. 1 Tennis Player in the World, and I’m Still Maybe Dating LMFAO’s Redfoo, the No. 1 Sleeveless-Shirt-Wearing, Rib-Exposing Human Fraggle in the World” Watch

Shout out to USA Today for referring to him as “Mr. Foo” in this piece on their “no kiss-and-tell” relationship.

Are you related to that person I think you’re related to, CoCo Vandeweghe?

With only half of the spots filled, we already have a Venus vs. Sharapova and an Ivanovic vs. Jankovic. Get excited.

Questions and Answers Surrounding Chip Kelly's Move to the Eagles