Q&A With Dennis ‘Baby Rondo’ Schröder: Atlanta’s Ascendant PG on Skateboarding and the Utility of Mayonnaise 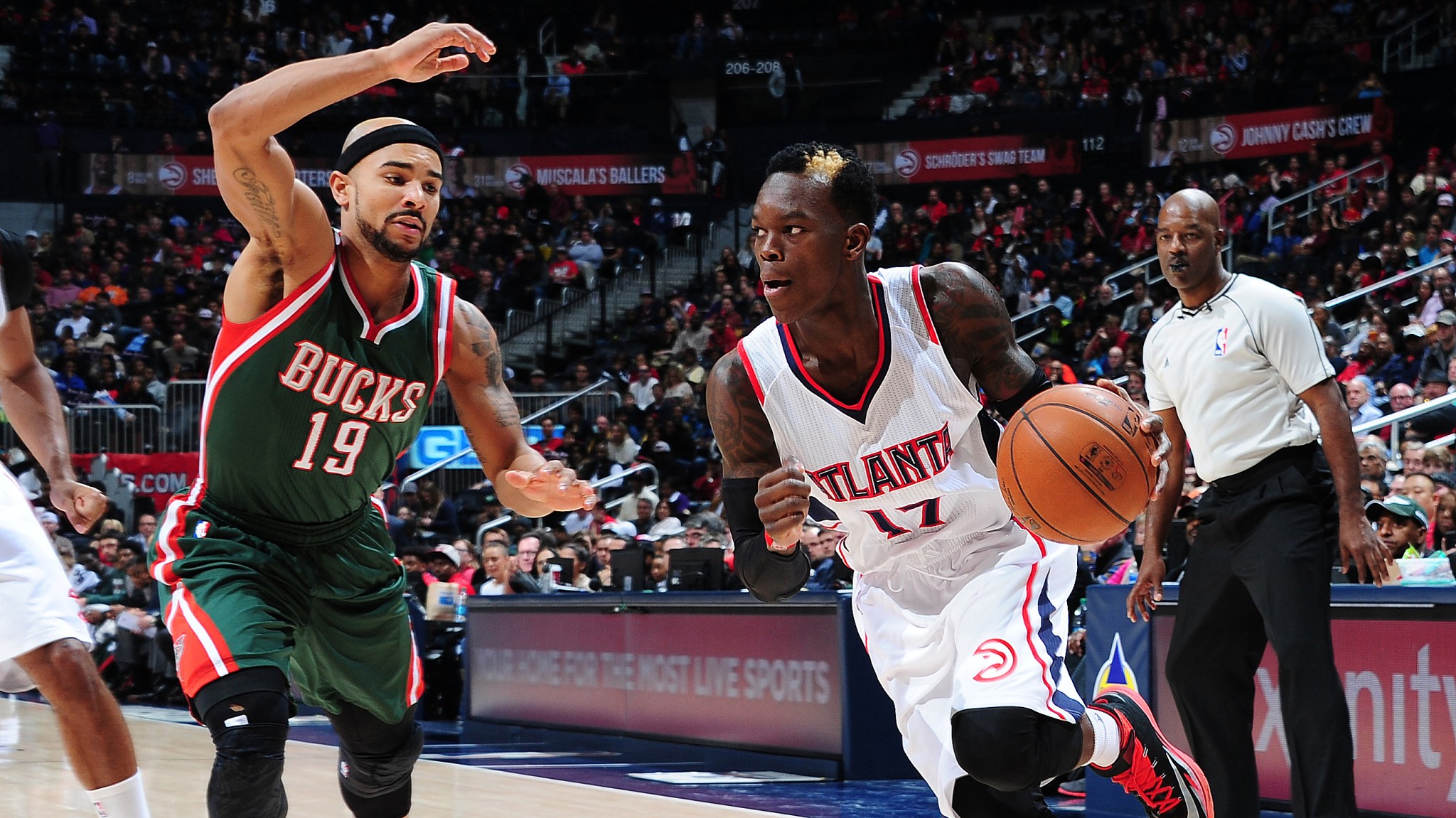 There haven’t been many umlauts in the NBA. (Hanno Möttölä and Martin Müürsepp, anyone?) But there have been fewer still with blond-striped coiffures. Last year, the Atlanta Hawks used their 17th pick on Dennis Schröder, a feisty point guard from Germany who is at the intersection of this particular Venn diagram. In early November, the 21-year-old leaped onto YouTube with a daring dunk over Tim Duncan, Kawhi Leonard, and the San Antonio Spurs.

When starting point guard Jeff Teague sat out three games with an injured hamstring in mid-December, Schröder guided the Hawks to consecutive road wins over Cleveland, Houston, and Dallas. He scored a career-high 22 points (along with six assists) in a 105-102 win over the Mavs, whose new point guard, Rajon Rondo (6-of-15 for 13 points), was his hero growing up. I spoke with “Baby Rondo,” as some call Schröder, during the Hawks’ torrid December, when they began a stretch in which they’ve won 15 of their last 17 games and risen — to the shock and consternation of many — to first place in the East.

I hear you’re a skateboarder.

When I was like 6, my brother took me to the park near our house in Braunschweig, Germany, and taught me to skate. We skated on everything: rails, ledges. My older brother had a couple offers to go pro — he thought I was good enough, too — but we started playing basketball instead: three-on-three, four-on-four in the park. But skating was my first favorite sport. I skate still for fun.

I mean, I’m not doing dangerous stuff anymore. Just going to the grocery store. I usually stay on the sidewalk. I’m not doing kickflips much.

Does skating make you a better player somehow?

That’s what my brother and my family think: that it helped my footwork and my balance. I don’t know. It’s just fun!

Who was your favorite player when you started following the NBA?

Before I came to the league, I think Chris Paul and Rajon Rondo. But now I’m on an NBA team, so it’s kind of tough to say you have favorite players, you know? I want to be as good as those guys.

You’ve made that case recently, especially in that big win over the Rondo-led Mavs. Do you ever talk to Rajon?

Yeah, I talked to him once for about 10 to 15 minutes before a game. We talked about my first two years, but we didn’t talk about being compared to each other. It’s not like he called me Baby Rondo or anything. That’s just the fans.

Tell me about your blond streak.

My mom told me to make my whole head blond a few years ago. I was like, “No!” So she told me to just do a little part of it. I did that in Germany. Since then I’ve had it. My homeboys — the Flex Gang — they do too. And my brother. They represent for me.

Some friends of mine. We’re putting together a clothing line — T-shirts, hats, hoodies — but I’m not sure when it’s gonna be out yet. Until then, everyone can just start with the blond streak.

Kyle Korver told me that you had a complete change of mind-set between this year and last year. What happened?

I know how the NBA works now. How to train. I also understand defenses very well. Last year, I think, I was kinda just: go out there and play. Now I understand from Coach Bud [Atlanta head coach Mike Budenholzer] and training camp what to actually do. I’m listening better.

Seems like you’ve got the half-court offense within your grasp now too.

I’ve watched a lot of film. Watched Tony Parker, especially — how he uses his speed and his ability to go the basket. Every time I watch the film, afterward I try to do the same thing.

Who are some of the fastest players you’ve had to guard?

John Wall. When he gets an outlet, it’s tough to stay in front of him. He pushes the ball so hard. I think he’s the quickest player I’ve ever played against.

How intense is the competition between you and Jeff Teague?

I try to get better, so I try to play against Jeff Teague the whole time in practice. We compete hard. It’s great to play against him all the time. When he sees me do something wrong, he tells me how to do it better. In the games, he tells me, “You’re good at this, you can go to the basket.” Every time he tells me something, I try to do it next time. That’s the difference between this year and last year. I try to be aggressive on the offensive end and look for my shot. The coach is trusting me more this year too. And Paul Millsap, Al Horford, they trust me and tell me: “Go to the basket. Nobody can guard you.”

Why are the Hawks so good right now?

For the Hawks, everybody can go. It doesn’t matter who scores the basketball. I think that’s the great thing about the Hawks. We’ve got excellent passers and we don’t care who scores it.

What’s the biggest difference between playing here and in Germany?

Here, I’m playing every night against the best point guards in the world. You have to be ready for that. In Germany, the play is slower. Over here you push the ball every time you get it. There’s also more trash-talking over here.

John Wall talks a lot of trash. I did the same thing in Germany. It’s a little harder for me here, since it’s not my first language. But trash talk, that’s basketball. Everybody tries to get an advantage when they compete. Somebody joked about the blond streak once during a game. But my mom told me to do it, so I don’t care.

Did she encourage your mayo consumption too? I hear it’s high.

I love mayonnaise. In Germany, we put it on French fries, chicken, eggs, it doesn’t matter. I grew up like that. Before a game, I always eat a turkey burger with mayonnaise. The players say it’s disgusting, but I’m not changing. Coach doesn’t care.

How would you describe Coach Bud?

A couple games where we were down by 10 or 15 at halftime, he came in there and showed us the video. Then he told us very loudly: either we compete or we get our asses kicked. Sometimes he has to yell like that. But he’s usually the quiet guy who just tries to talk to us.

Can this Hawks team compete with anyone in the league right now?

We have a chance to be very good and compete with everybody. I don’t think we need another player. We just won nine in a row. We’re complete on defense and offense. We’re growing. I want everyone to get to know us … and me personally. Every time they play the Hawks, they’ll be thinking about us. They’ll be scared of us. I think we’re getting there. Right now they’re just curious.

What was it like jumping over Tim Duncan for that dunk in November?

I wasn’t scared until I realized I had hung on the rim a little bit too long. I thought they might give me a tech.

I heard from other players that in the past it wasn’t that good here: People only came out when we won. But right now it’s improving. We do a lot of community stuff, lots of events. We like to interact with the fans. Get a relationship with them. It’s getting there. I’ve got this tattoo that says “inshallah,” which means “hopefully” in Arabic. Hopefully we’ll get there.