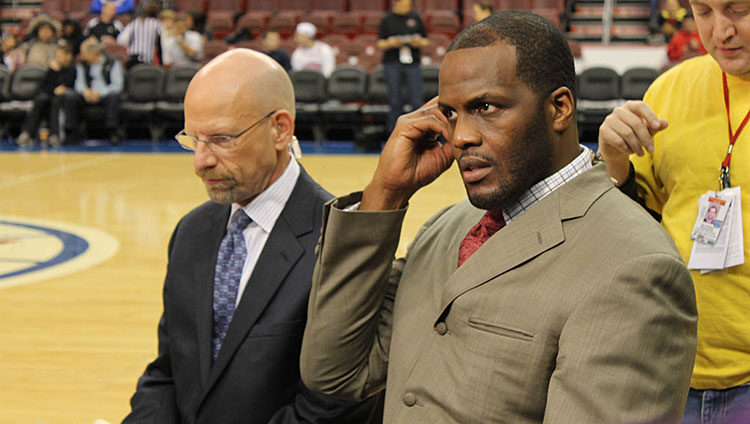 I recently sat down with the Sixers announcers for Comcast SportsNet — Marc Zumoff, now in his 20th season, and former player Malik Rose, who notched 13 seasons in the league with four teams — to discuss their partnership, the state of the Sixers, and their hopes for the team moving forward.

Marc, how did you get here in the beginning?

Marc Zumoff: I was the voice of an indoor soccer team, the Fever, in the late ’70s and early ’80s. In the last year of the team — 1982 — there were several games on the old Prism TV, which of course featured the Sixers, Flyers, and Phillies. The team went away but the channel liked me so they hired me to do movie announcements … you know, the 10-second “Coming up tonight on Prism.” I did that and then they hired me to anchor a little sports show that came between movies. I think they liked me even after that, so they hired me to replace Jim Gray, to do halftime of Sixers basketball, and that was the year the team won the title in 1982-83, and I did that until 1994.

How many partners have you gone through since you’ve been here?

Zumoff: We had Steve Mix for the first 12 years, and then Bob Salmi for two, Ed Pinckney, which was great — but Eddie got back into basketball with the Bulls; he is currently an assistant — and then Eric Snow for a year. And now I’ve found my soul mate. My on-air soul mate.

Click here for all of our interviews with fascinating people from the worlds of sports and pop culture.
Malik Rose: Toward the end of my career, I started thinking about what I wanted to do, started thinking about broadcasting a little bit, and the NBA players’ association has a couple of programs they would put on during the summers at Syracuse Newhouse School. I went there for a summer, and around this time, we had kept in contact, and he had called me saying there may be a job opening up. I came and interviewed, I didn’t get the job. It was probably the worst interview of my life, and then Eric Snow got the job. The next year Snow said he wasn’t going to be able to do it again; I re-interviewed, I was hired then. So, I think with me growing up in the area, us talking, and being cordial kind of laid the groundwork for our foundation.

Outside of the players’ association program at Syracuse, did you have any formal broadcast training?

Rose: No, it must be something with broadcasters, because I was always cool with Marc, and my last few years in the league when I played with the Knicks, Mike Breen and I would always have lunch on the road, or sit and talk on the plane. He was just really cool, so he just started telling me the things to do, and encouraging me to think about it.

You know you’re one of only two players from Drexel to ever make it to the NBA?

Rose: Yeah! Both played for the Spurs: Mike Anderson. It was funny, too, because Larry Brown was here the other day, and I went to the Temple game, and Larry Brown cut Mike Anderson, I was talking to him after the game.

I think he only got a year in the league.

Rose: Half a year!

With your partnership, what sort of message do you like to get across outside of the actual game on TV?

Rose: I think both of us want to make the game exciting. Marc knows the game, and more importantly he knows the rules, so whenever there is a stop or something and the refs are huddling to figure something out, he pretty much knows what it is, and he’ll lead the viewer that way. I try to come with more levity, pop culture. I try to bring in cool sayings, movie references, quotes.

Do you have those movie quotes preplanned or are they off the cuff? When you point out a rapper or actor in the stands and Marc doesn’t know who it is …

Rose: Sometimes I get in trouble.

Zumoff: All the time.

Rose: But that’s what makes us funny. I’ll say something he doesn’t know, and we are sitting there trying to figure out which way is up. But a lot of things I do say are unplanned, which I used to get in trouble for. Now my filter is a little bit better.

Zumoff: I think that real hard-core fans of the team, they invite you into your living room and develop a relationship with you. They want to know that the two guys they’ve invited in generally like the game and like each other.

How do you feel about the current state of the team?

Zumoff: I think what they’re doing is great. I think they’re doing something that’s needed to be done for a long time. You can’t ham and egg it in the NBA. You have to decide that you are going to take it down to the studs and start over, and that’s what they’ve done.

I think in Sam Hinkie, you have a very smart, cutting-edge guy who is not afraid to make a move and take a chance.

Then when you have a really young team, you have a guy who helped develop Malik Rose in San Antonio, in Brett Brown, who is a terrific teacher of the game, and a guy who I think fans have really taken a liking to.

How have things changed on the job due to the team’s performance? It can’t always be easy to find talking points when the team is getting blown out.

Rose: I depend on Marc for that. He always has something to talk about, whether it is where a guy is from, what he did growing up, a unique story. During some of the blowouts, we have to fill time. We’ve talked about food, my tuba playing, growing up in Philadelphia. Whatever it is, he can always start a conversation and we vibe on that.

The season for me, it’s kind of been … not really tough. I’m always up to do the games because I really enjoy what I’m doing … but the player in me, and especially because I care for Coach Brown, I hate seeing them struggle like this. It really bothers me sometimes seeing the same little mistakes that can be corrected like that. It gets under my skin. There has been maybe four or five times this year that I’ve really gotten angry, but for the most part I enjoy coming to work even in the blowouts, because I work with some good people and I’m around the game I love, so I’m really lucky.

I’ve seen on the Internet some people mention the catchphrases. Where do those come from?

Zumoff: I spent about 12 years as the halftime guy and did my own interviews and scripted my own features, so I did a lot of writing. You start coming up with phrases that capture the moment. When you’re doing games on TV, people can already see what’s going on. To say it’s a layup, or it’s a 24-second violation, as opposed to “they’re locking all windows and doors,” that sort of resonates. It adds a dimension to what people already see. So they see the referee do this, they see the 24-second shot clock go off, and then adding to the fun of the Sixers getting a stop like that is, they’ve locked all windows and doors.

That phrase in particular has been mentioned on Grantland by Zach Lowe in one of his previous columns.

Zumoff: We saw that.

Malik, have you always been a student of the game? Are you watching more film than you have in the past?

Rose: For the bulk of my NBA career, I played for Coach Popovich. Pop always kept you on your toes. The way the plays were built in S.A., Pop would call a few actions, and see if you could figure it out. That type of stuff really had all of us thinking at all times. I know that’s what really helps me look at a play, look at something that has developed, and see what did happen, what should have happened, and why.

What’s your view of Philadelphia as a market? As a free-agent destination? This should be a prime destination for free agents. It hasn’t worked out that way in the past, but it should be. It’s an amazing place to play, especially when the team is winning.

Zumoff: I think in our market, you have to bring it the way [Allen] Iverson did every night. I think that if fans see effort and a blue-collar work ethic — I know it’s trite, but it’s really true — then they will embrace you. They are going to want to see winning at some point, but that would be a great starting point.

Rose: I remember as a player the saying around the league was nobody wanted to play with Iverson, because of the way he shot the ball, not because he wasn’t a cool guy. It was tough to be Robin to Iverson’s Batman, because he took all the shots. That was one of the main reasons I think Philly didn’t get free agents.

Did you know him personally?

Rose: We hung out a few times. He got guys when they were at the end of their careers — Chris Webber, Derrick Coleman, Glenn Robinson. None of the Dwyane Wade–LeBron James thing was going to happen with Iverson, just because of his shot selection and the times he shot.

What are your hopes for the team moving forward?

Zumoff: I’m just hoping and praying that they get a guy they can build around, who will identify the franchise for the next decade, who will be someone who will not only be the go-to guy in a game, but in the locker room, who will help the coach in the locker room to enforce his mandate. I want Tim Duncan. Not necessarily the greatest power forward of all time, but I want that kind of guy, a stand-up guy, stud, good human being, and who enforces the coach’s mandate in the locker room. If we can get that guy, I think we’ll go places.

Adam Wilk is a writer living in Philadelphia.