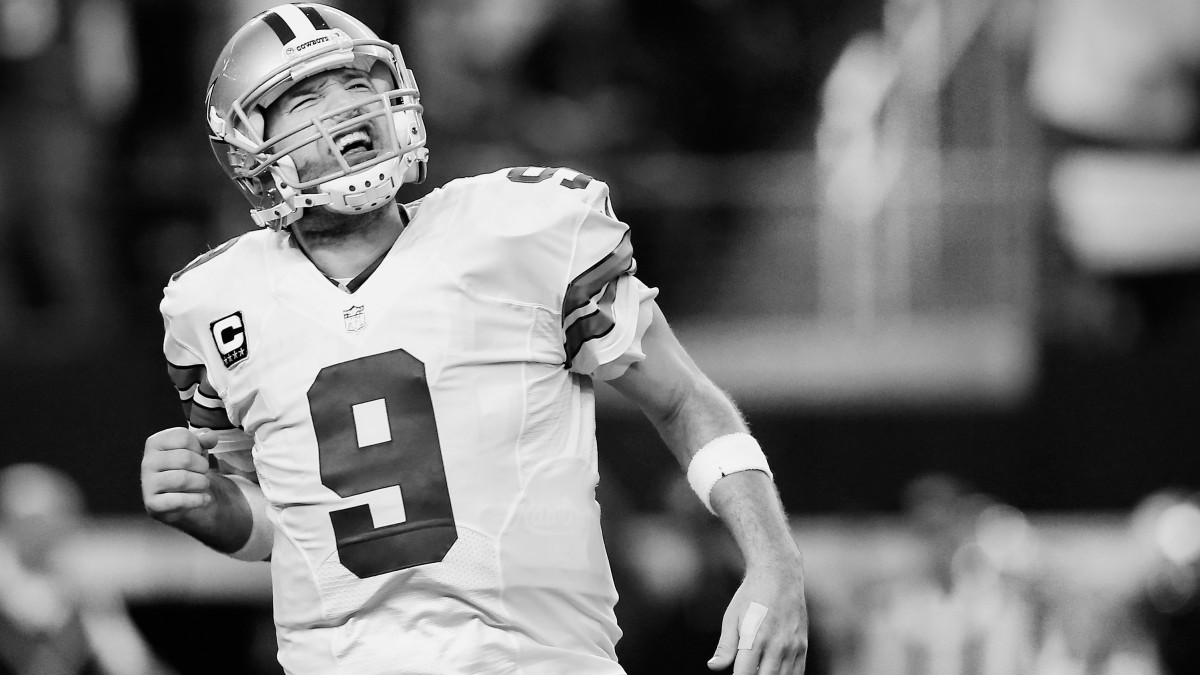 Jerry is my amigo. Jerry wanted me to be happy, here in Section 242, in my $200 seat. Jerry wanted me to be as happy as he is so I can pretend to be as rich as he is. Jerry wanted me well fed — and well lubed, if that had been my choice, which it wasn’t — and as coddled as a mere Section 242 person can be with the Section 242 person in front of him jacking her seatback until it lodges somewhere east of his right MCL. Jerry built his stadium so he could make me believe that I was somewhere else in his stadium, even when I’m here in Section 242. Jerry built his stadium, with its Section 242 tucked into one corner of it, to build a luxury suite in my mind. We’re all in this together and the world is our ATM and Jerry is my amigo.

So I must make a request of my amigo, now that he’s in a great mood because his Dallas Cowboys have managed to get past the Detroit Lions, 24-20, and to win the first playoff game they’d played in five years, setting up Dallas’s first postseason visit to Green Bay since Jerry Kramer (and Ken Bowman) wedged Jethro Pugh out of Bart Starr’s way in 1967. He’s also in a great mood because of some surreal officiating that went his way. He’s also in a great mood because, up in Jerry’s own luxury suite, Chris Christie didn’t eat all the shrimp and the counter on which they were placed, although reports vary on this. So, Jerry, my amigo, here’s the deal.

At the western end of your palace, there’s this big wall of glass that makes the joint look like a terrarium for rich people. This has a pleasing effect on the general ambience. As the day goes along, and the sun begins to fall over the abandoned luxury condo developments outside, great swaths of sunbeams spread over that half of the field until it looks very much like the game is being played in Rivendell. It was into this lovely, hazy region that Dallas’s Terrance Williams took a simple slant pass from Tony Romo 76 yards with 1:37 left in the first half to get the Cowboys to within 14-7, and to keep them in the game, truth be told, despite a Detroit field goal right before halftime. The problem is that the sun keeps falling and, pretty soon, it comes in directly through the big glass wall and into the eyes of those of us in Section 242, and we had the paradoxical experience of missing plays in an indoor stadium because the sun was in our eyes.

So, Jerry, amigo. A $1.2 billion stadium and you couldn’t go down to Home Depot and spring for some Venetian blinds?

Good thing night fell, or those of us in Section 242 might have missed half of the whole damn thing, including a second half so fraught with doom and dark possibility. Something really bad was going to happen to one of these teams, something that, one day, in one of these cities, people would remember and begin to drink heavily again. You could feel it in the place. It overhung the game like icicles from a roof. And several of these things happened, and we’ll get to those in a moment, but it all felt less perilous in Section 242 because Jerry would keep us safe, and because you could watch the game on the giant television set that hangs above the field and pretend you were watching a TV show about zombies who get jobs as referees, rather than look down at what really was happening on the field.

Of course, the whole thing is extravagant and foolish, and an insult to the present state of our civilization, although the full extent of the insult to the present state of our civilization will not become completely plain until some archaeologist not yet born digs up the place and concludes that the people of the 21st century were a race of primitives who lived on hype and pixels. I worry about what the archaeologists of the future will think of us. I am not the only one I know who does. 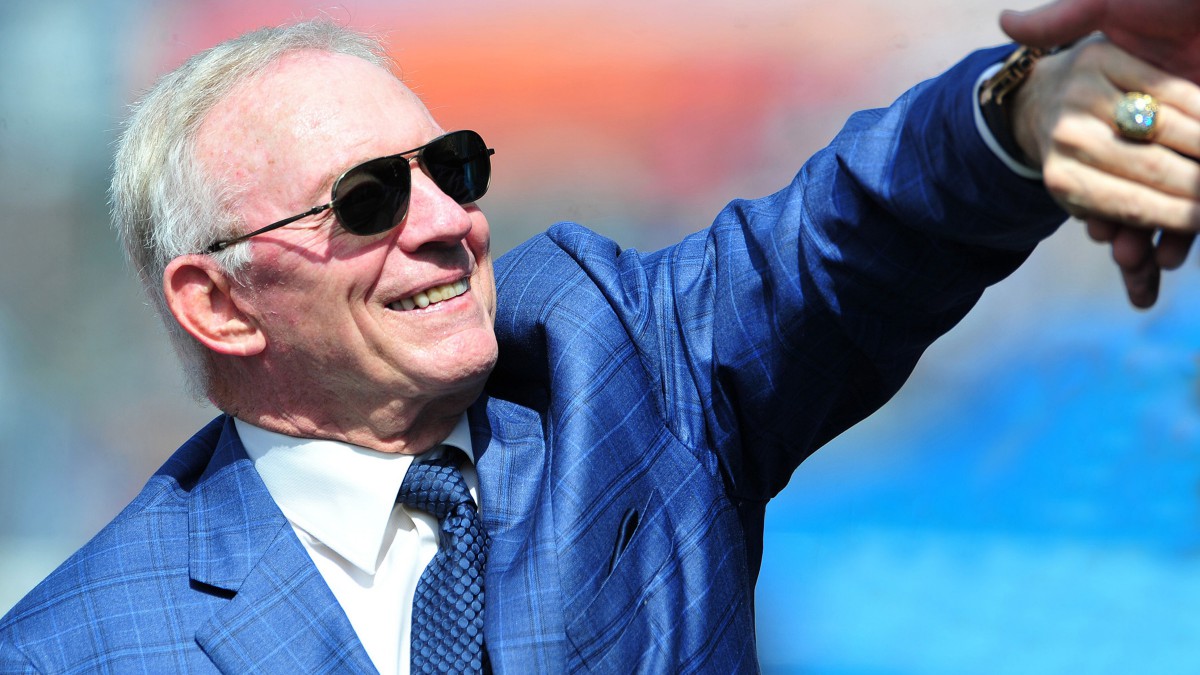 These are my observations, taken from Section 242, where everyone was very surly, and then very nervous, and then very, very happy. They are presented in no particular order.

1. This game is why I do not gamble on sports. This is because, in every sport that I know, they have referees, and every referee I ever have seen was a human being, with human foibles and human weaknesses and human frailties. With 8:25 left in the game, and clinging to a 20-17 lead, Detroit was driving on Dallas again. On third down, Lions tight end Brandon Pettigrew got loose downfield, and Dallas linebacker Anthony Hitchens, running with his back to the play, simply ran over Pettigrew. A flag went aloft. Referee Pete Morelli announced to the crowd that Hitchens had been called for pass interference. Section 242 was aghast. Dallas star Dez Bryant stormed all the way out to the middle of the field, helmetless, looking for a face into which he could get. Instead, god alone knoweth why, it was decided that the call would be reversed, that there was no foul, and life would go on, and maybe, like, nobody would notice.

This is the first time I ever have seen anything like this on a football field. I never have seen a crucial penalty call simply disappear without explanation after it’s already been announced to the crowd.1 Of course, hours later, Morelli produced some authentic football gibberish that nobody with any sense would buy. Nevertheless, instead of having a first down inside the Dallas 30-yard line and a chance for a 27-17 lead, the Lions stood on the Cowboys 46 and chose not to go for it — controversy! — on fourth-and-1. Detroit punter Sam Martin proceeded to produce a shank you could hear in Cotulla, making Detroit coach Jim Caldwell’s decision to kick look even worse. The ball went 10 yards and flopped out of bounds. This is how the game turned. For want of a flag.

(The officials were not done making their mark on this one. The winning Dallas drive was helped along by two holding penalties on the Lions secondary in the course of four plays. Take a bow, gents. Stay out of Michigan.)

2. Detroit quarterback Matthew Stafford is Not Ready Yet. In the first half and through half of the third quarter, he was crisp and clean in his reads and his throws, carving up the Dallas defense and mixing in some nice runs from Joique Bell and Reggie Bush, and helped the Lions pile up a 20-7 lead shortly before the Carnival of Fools began. After the game turned, Stafford turtled. Part of it was because the Dallas defense found another gear. After Dallas took its only lead on the second touchdown pass from Romo to Williams, Stafford fumbled twice under pressure in the last two minutes of the game. On the first, Dallas was kind enough to fumble away the recovery of Stafford’s fumble back to the Lions. The second one came on the last Detroit possession, when rookie defensive end DeMarcus Lawrence buried Stafford and then dove past him to recover the fumble. He will learn from this, one supposes, and there is no better story from which Matthew Stafford can learn than the story of the other guy playing quarterback in Jerry’s place. 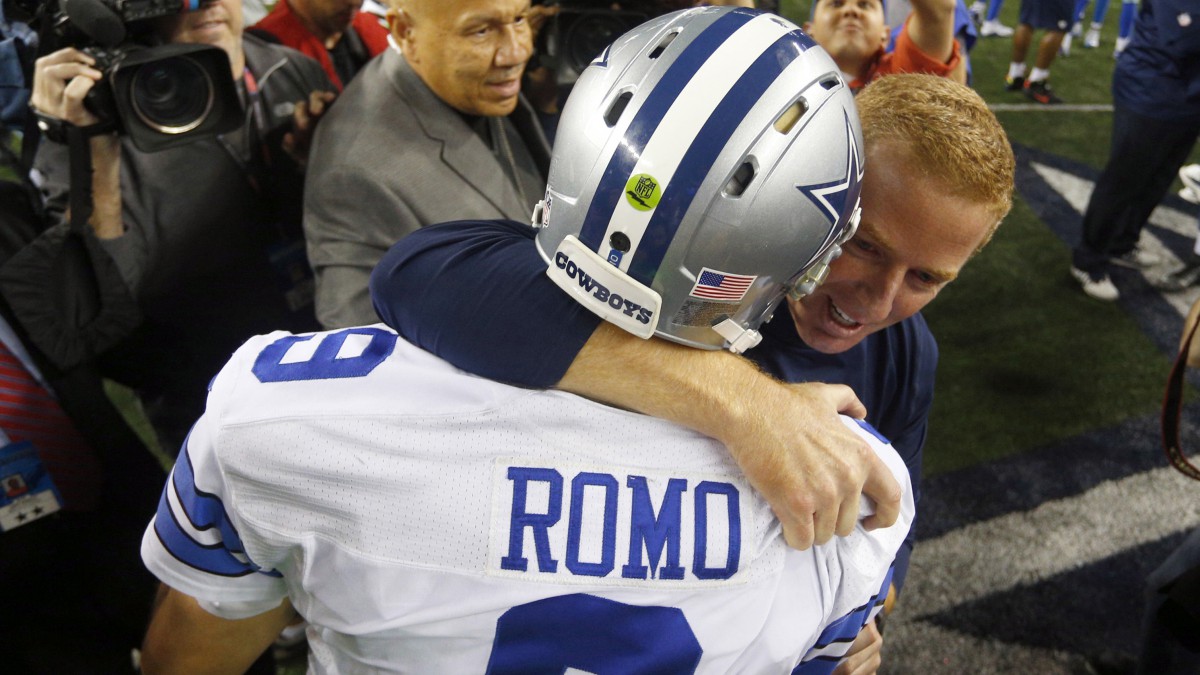 Tony Romo has those Matthew Stafford moments in his past. Some of them are pretty funny and some of them are damn near legendary if you’re not Tony Romo. He even had a few of them yesterday, especially in the first half, when the Detroit defensive line was screwing up the blocking schemes in front of him, forcing Romo to one-hop several passes. In fact, even when things turned around for the Cowboys, Romo still had his problems. At the beginning of the fourth quarter, Dallas had a first down on the Detroit 18. DeMarco Murray rushed for no gain. Then, Romo made the same mistake two plays in a row. He danced around the pocket until he found himself lost in the House of Spears. Nothing good ever happens in the House of Spears.

Make no mistake, though. The Cowboys are playing in Green Bay next week because on Sunday Tony Romo was a tough, resilient, winning quarterback. He took a fearful beating, being hit 10 times — according to the stat sheet, which I guarantee is a low count — and taking six outright sacks. But he bounced up from all of it and produced a magnificent second half that ended with him dancing around in the pocket but managing to stay out of the House of Spears in order to find Williams, who was running in odd tandem with Bryant in the back of the Detroit end zone, with what has to be the biggest touchdown pass of his career. And, oh, yes, in keeping with the day’s events, on that same play, Dallas’s Tyron Smith probably got away with a hold on Detroit’s Ezekiel Ansah. That’s the way it looked from Section 242 anyway.