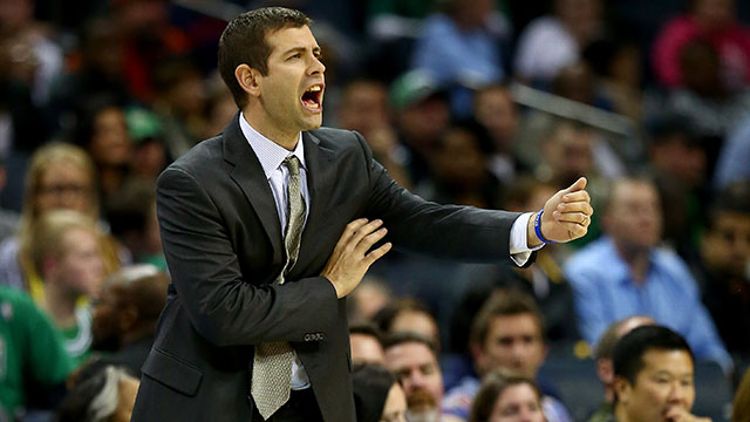 Boston shocked the NBA landscape twice within a two-week period last summer, first dealing Kevin Garnett and Paul Pierce to Brooklyn, and then hiring Brad Stevens seemingly out of nowhere as Doc Rivers’s replacement. No one seemed to even know Stevens was a candidate, or that the Celtics were interested. Boston broke the news itself, a rarity in the Twitter age, even though Butler University’s website jumped the gun by a few minutes with a press announcement nobody noticed.

Stevens is already an improbable Coach of the Year candidate, having guided an allegedly tanking squad to the top of the Atlantic Division (don’t laugh) behind a stingy defense thriving despite lacking any rim protection. Stevens spent some time with Grantland on Tuesday as the Celtics prepared for the Pierce/KG reunion in Brooklyn.

Was there a “Come to Jesus” talk with Jordan Crawford? Did you sit him down and tell him how he’d have to play in order to save and prolong his NBA career? There must have been a frank conversation.

I never had it.

It was more about talking collectively about: “What do we all do well?” And then thinking about what our teammates on the floor do well, and how we all can make them better at what they do. There are very few guys in the NBA who don’t have things they don’t do well. Some of the better players don’t have very many, but everybody is here because they have a strength. So you just try to find your strengths and soar with them.

There was really no conversation? Did he pipe up and tell you he could play this distributor role?

The only thing I wanted to make sure he knew from my standpoint was that it’s a fresh start — that we believe in him. I had seen him be almost unstoppable in college [at Xavier], in a game I coached against him. I knew he was a tough shot-maker. The other thing I knew was, he’s not scared of the moment. I watched him play us, but also watched him play Kansas State [in the 2010 tournament] from the front row, because we were gonna play the winner. And he made huge shots. And in the NCAA tournament, in that tense of an atmosphere, that takes a lot of guts.

I’ve been told to ask you to identify the funniest thing Crawford has said to you this season.

[Laughs.] He hasn’t been a comedian! He’s been pretty serious.

I didn’t mean to say he hasn’t been serious! He’s just a funny dude.

He’s received us really well. I can’t think of anything funny that he’s said — at least to me.

Much different. All it means is that you have to get into your stuff sooner.

That’s what I was curious about: How much different is it, really? Is a college possession just a longer NBA possession, with time and flexibility to add a few more counters and actions in at the end? Or is there something qualitatively different about what you can do?

There’s a chance for an extra counter [in college] if you start quickly, or you can take the other approach, and do action after action, and finally into the main action.

More misdirection. And you can’t do that here. We had a continuity at Butler that might take 24 seconds every time. And you can’t do that, obviously. You have to get to your action quicker. And you have to put your guys in a position right away to have success. And these guys have done a great job of finding those spots. Our offense has gotten better in the last eight games.

I noticed a recent uptick.

It’s a little bit of the guys, they understand each other better. They are playing confidently, and they should be. They’ve earned that. And that’s about it. The scheme is nothing to write home about. The guys have embraced it and are doing it well.

I’ve noticed you own a lot of green ties.

Did you have a lot of green ties before? Do they come with this job? Do they just appear on your desk?

Let’s put it this way: I haven’t bought one.

So the team buys them!

It’s not them! It’s not the Celtics. Some come in the mail, somebody delivers it. Actually, that’s not true: I bought one for the press conference. But that was because we were flown to Boston on July 4, and we needed a green tie. But other that, we haven’t bought one.

Which Celtics legend were you most nervous-slash-excited to meet?

I’ve met them, and it’s probably not fair to single out one. The one I’ve spent the most time with, that I just thoroughly enjoy, is Tommy Heinsohn. His insights are really, really good. He’s not just the analyst around us. He’s a former player, former coach, a deep-thinking guy.

His, umm, announcing style must clash with your clear-headed, analytic approach to basketball, though, right?

I don’t know about his announcing style. I know this: I love his passion for the Celtics, and I love the way he speaks positively about all of our guys.

He started that with me, from day one. So that’s not just when he’s doing the analyst stuff.

What’s the highest-level math class you ever took? I mean, did you take AP Calculus in high school?

That’s all been overhyped and overrated. I do think in numbers. My mind works that way. I was an [economics] major. I’m not sure I could tell you which line is supply and which one is demand right now. That was 15 years ago. But I never took, like, the college-level junior year math.

I mean, people ask me if I’m a “math guy” because I used advanced stats. I got a 3 on the AP Calc exam in high school and never took a high-level math class again.

Yeah, yeah. That’s the way I am. But that is the way my mind works.

You’ve made one massive change from how Doc Rivers coached. On his Boston teams, the big man guarding screeners on pick-and-rolls would jump out aggressively on those plays — really attack the point guard above the 3-point arc. You’re having the big guys on this team drop back more consistently than almost any team in the league. Have you always been a “drop” guy? Or is it just something you thought would fit this team?

Looking at what I thought would be most effective long term, in large part because of study, and because of hiring a guy like [lead assistant] Ron Adams, and listening to what he thought was the best bet for our team. That was really hard for me. You’re coming into a new situation, and you’re not coaching what you’re comfortable with. It’s a double whammy. But Ron is really good at it, and [assistants] Jamie [Young] and Jay [Larranaga] have been here. Walter [McCarty] has been here in the NBA as a coach and a player. The more we looked at it, and the more we looked at our team, we just thought it was a good thing. Our guards can get into the ball, and our bigs are really bright on the back line covering for one another.

You mentioned studies. What did you look at, and what did you see that wasn’t Boston-centric?

I was more interested in what’s Boston-centric. It’s not perfect. We have to be able to blitz, or show, when we need to. But it has been good for us so far.

Adam Silver said the other day he’s interested in the idea of eliminating divisions. You guys currently lead the Atlantic Division, which isn’t a very good division right now. Do you support the idea of scrapping them?

I have no idea, because I haven’t been in it long enough. But I think that, like anything else, you’re gonna have years when things are up, and [years when] things are down. But that doesn’t mean 22 games, that we’re all fully defined yet, either. That’s one of the things we try to talk to our guys about: Just because somebody has an expectation for you, that doesn’t mean you have to live up to it — good or bad. You have to get as good as you can be.

Was that an organizational decision? Did he push for it? Did you? Danny Ainge?

I’ve always been a guy that if you can shoot 3s, you need to shoot 3s. It extends the defense, especially when you’ve got a guy that can play an undersize 5 role. There are times when he’s not going to be able to score as easily on the block, simply because of length. And so, his versatility will become facing up and shooting 3s. I saw him play in high school and in open gym, and I remember calling Thad [Matta, current Ohio State coach, former Butler coach] on the way home and saying, “I never knew he could shoot like that.” And that was five or six years ago. And now he’s still shooting like that.

The traditionalists grumble at that kind of thing. I think Mike Gorman, your play-by-play guy, needed some winning over. Tommy won him over, I think. Tommy is all gung ho about it now.

I understand that. I’d like to play inside-out first, too.

And you are, right?

I mean, you’re near the top of the league in total post-ups.

And [Brandon] Bass is posting up three times as much as he has in the past. At the end of the day, we have to use all of our strengths.

Analytics folks say the post-up, or at least a post-up shot, is a low-efficiency play. But there’s a way to reconcile that, right?

There are two ways to get inside-out: driving or posting.

In other words: The post-up is more a vehicle for passing and other shots, rather than necessarily for a post-up shot itself?

Have you looked at any information from the SportVU data-tracking cameras yet?

I have not. I get reports on it sometimes from Drew [Cannon, Stevens’s longtime analytics guy] and [Boston assistant GM] Mike [Zarren].

Have you learned anything you didn’t already know?

Nothing that I’ve thought was impactful in coaching a team yet. I’m sure there will be, but to me, I haven’t found anything that has wowed me yet.

How is practice at this level different from the college level?

We’ve practiced eight times since the start of the season, so a lot less.

But that’s schedule- and travel-related. Are the practices themselves any different? Longer or shorter? More or less physical?

The practice length is the same, and the way we go about practice is very, very similar. It’s the way I’ve always done it at Butler. I’ve always tapered back once the season started.

Jeff Green’s passing numbers, until the last few games, have been disappointing. The Thunder thought he’d develop into a very good passer, but when I watch you guys, he just doesn’t seem to read the floor well. Is that something you see him improving?