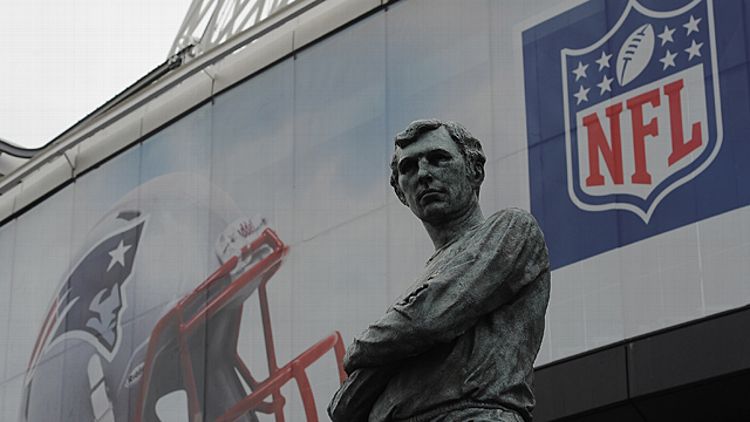 The National Football League is big business, which is a stunningly obvious, relatively unhelpful thing to write, unless you’re talking about the NFL in the United Kingdom, where Roger Goodell and the owners are making a conscious effort to expand the game. There are the matches at Wembley Stadium, the talk of a team based in London, and other initiatives. Across the pond, the game is growing.

On August 28, the sport gets its own publication there. Matthew Sherry, a journalist for the Press Association (the British AP), is launching Gridiron, a digital magazine focused on the NFL and targeted to the U.K. audience. The debut issue, which costs £3 (roughly $4.70), features interviews with Adrian Peterson, Andrew Luck, and John Harbaugh, and columns from Sky Sports’ Neil Reynolds and freelancer Paolo Bandini. Although only one issue of Gridiron is currently planned, Sherry hopes to make the publication a full-time job if it gains enough traction.

We e-mailed with the editor — who coincidentally shares a name with a Cincinnati Bengals tight end — about the state of the game abroad, the decision to launch a magazine, and why football in the U.K. is like soccer in America.

So … you’re starting a magazine. About American football. In the U.K. You sure you have the right industry, the right sport, and the right country?

While it’s clear that other sports — such as football, or soccer in your money — carry much greater fan bases on these shores, the market is very much saturated. The exciting thing about NFL is that it’s a market that’s growing all of the time over here, epitomized by two Wembley games selling out in next to no time for this year.

Click here for all of our interviews with fascinating people from the worlds of sports and pop culture.
We are confident the interest level is there to sustain such a product, but we’re approaching it in a risk-averse way. The start of this is very much a labour of love and we’re not guaranteeing future issues until we see that there are enough buyers to make it sustainable.

From my point of view as the editor, I obviously believe it will work; however, given the outstanding coverage available online from outlets such as yourself, it’s important to be realistic. We’ve started at a relatively low level with just a digital product and hope we can grow that into something substantial.

To sum that up: Yes, we’re confident but, at the same time, we need people buying too.

The NFL plays a game at Wembley Stadium every year. They seem to be making a very conscious push into the U.K., but is the league making smaller, more grassroots marketing efforts that we might not be aware of in the States? If so, are they working? Basically: I wonder about the sport’s market penetration over there.

The impression I get is that the NFL have gone from dipping a toe into the water to a foot and will continue to further their efforts as long as interest remains and grows; it’s a process of increasing the exposure more and more over time.

Now the obvious example of that is one game growing to two from this year, but there is also increased activity over the offseason. Through NFL UK, for example, there have been a series of fan nights this year with players from teams playing this year and even Andrew Luck. We’ve had a good group at those: Luck, Ben Roethlisberger, Harrison Smith, John Sullivan, and Kyle Rudolph, to name just a few, and they’re great events that fans love.

Also, around the Wembley games, there are a series of events, fan rallies and the likes that draw a good crowd. So, yes, it seems the NFL’s efforts go beyond just those two weeks a year.

A large part of the fan base is still those who tuned in during the boon in this country during the 1980s. However, there is little doubt that the amount of new fans is growing seemingly year on year. I use my own friends as an example: When I first started watching in the early 2000s, there was only really myself and a friend who had the interest. Last year, that friend went to the game with four other mates, all of whom paid for travel, accommodation, and tickets — probably around £200 each — just to go. That’s almost a microcosm of a wider spectrum.

In terms of why that’s happened, there’s obviously been much more publicity since the first Wembley game; Sky Sports play a huge role in publicizing things by showing at least three games a week, plus Red Zone. We also have things like NFL Game Pass, which allows us to watch any game live or on demand, Red Zone, NFL Network, archive games, coaches’ film, and much more.

I suppose, therefore, good publicizing and word of mouth have played a big part in the growth. However, your point about people becoming disenchanted with soccer is a good one too. There are a number of people in this country who are sick of the overhyped coverage that soccer gets and the money involved in the game so I do think there is an element of that.

If I had to describe the average fan, it would just be as a fanatical sports consumer. Using myself as an example, I love all sports — soccer, cricket, golf, and American football in particular. Obviously, my job dictates that I should, but I think we’re all fans at heart, otherwise we wouldn’t be doing it. The great thing about American football is just how much there is to it; one minute you’re watching a game, then you’re learning about X’s and O’s and looking at film. Once people in this country get past the usual moans about how many breaks there are in the game and realize why teams are running out of bounds in the last two minutes to stop the clock, they realize it’s a sport that has everything.

You mention the boon in the 1980s. I didn’t know anything about that. Can you explain it a bit?

The growth in the ’80s came via a very simple means: The U.K. started showing NFL on terrestrial television and the game grew very quickly across the U.K. and Ireland. Subsequently, we had the American Bowl Series in this country too — which saw teams playing preseason games outside of the U.S. for the first time.

Would you say that the NFL is proportionally more popular with the younger generation than the older one?

I would say that it is still weighted towards the older generation, but there is little doubt that the number of new, younger fans is growing all of the time.

Football/soccer in the U.S. is equivalent to American football in the U.K. Fair or unfair comparison?

I think that is a totally fair comparison.

I am not about to claim that the NFL is as popular in this country as soccer, in the same way someone producing a Premier League mag in the U.S. wouldn’t say it’s as popular as the NFL. These are both niche markets in our respective countries and, I couldn’t speak for soccer over there, but NFL is a growing niche over here.

The only thing I would say is there is more scope for growth of the NFL in this country than the Premier League in the U.S. Obviously, the regular-season games only grow interest and if, as seems likely, a team is based here, there will be more growth.

What is your sense of the timing on a U.K.-based team?

My sense this time last year was that it was still a long shot; now I believe it’s a matter of when not if. Selling out two games so quick has clearly impressed the NFL, and I wouldn’t be surprised to see more games added even as early as next year. Should that be successful, I assume the impetus will only grow. A reserved estimate would be a team coming over in 10 years but, as time goes on, I think that length of time is becoming shorted. At the moment, I would not be surprised if there was one in five.

Is there resistance to the NFL because it’s an “American” entity?

Obviously, the two approaches to sport are very different. In America, it’s an event as well as a contest and that does not sit well with some U.K. fans, nor do the breaks in play and advertisements, etc. So in some groups, there is resistance, but I come back to the point of more people understanding the game breeding more passion. Acceptance is a thing that’s difficult and will never come in some quarters, but I would say more and more people are coming around all of the time.

The debut issue of Gridiron features a pretty impressive slate of stories, including interviews with Adrian Peterson and Andrew Luck. How did you score those? Are your writers primarily based in the U.S.? What’s the state of NFL writing in the U.K.? Is there a U.K.-based NFL blogosphere?

I think the best way to describe it is that there are a few committed journalists who have managed to work solely on the NFL over here, but it’s far from easy. Our three main writers for the first issue are myself, Neil Reynolds, and Paolo Bandini. Neil anchors our coverage on Sky Sports over here but is from a written background and has been invaluable in helping us pull this together. He has spent a fair bit of time in the States and works with NFL UK too. Paolo is a freelance journalist who worked in Britain but is in the States and doing regular NFL stuff alongside his other work. I work mainly in cricket but have covered the Wembley games over the last few years and have covered more and more NFL bits in recent times.

In terms of a blogosphere, there is no go-to U.K.-based site with NFL content, although Sky do some stuff, while coverage in national newspapers is small but growing slightly. There are some unofficial sites that do podcasts and other written bits that people enjoy but nothing that is of a huge scale.