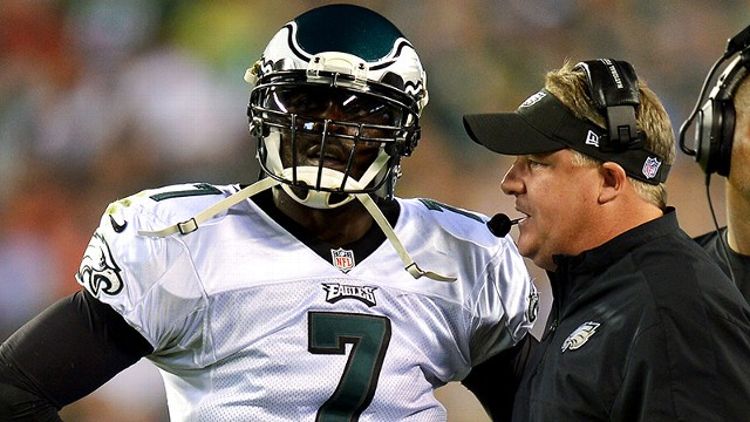 Two weeks! Two weeks. Somehow we’ve made it this far, and after swimming through an ocean of despair all summer long, professional football starts in just two weeks. The shore is officially in sight. Mays is busy today, so I’m taking over the Warning series for the afternoon. We need to talk about the Eagles.

It’s hard to get all that excited about anything during the preseason. The games mean nothing. The players don’t want to talk. The coaches speak in a special kind of clichéd gibberish that makes everyone dumber. And then most of the media updates from training camp look something like this:

But all month long the Eagles have been a glaring exception. Chris Ryan and I have spent the month trading Eagles tweets back and forth, just soaking in the madness of whatever the hell is happening with this team.

Chip Kelly’s practices are something else. 11-on-11 drills are being run with “Pirates of the Caribbean” soundtrack blaring at max volume.

Chip Kelly just said the Eagles won’t tackle AT ALL in training camp. Only tackling will be in preseason games. Wow.

#Chipisms: “Best ability is durability,” “Other guy is a chin strap away,” “We’re an equal opportunity scoring offense.”

Football quotes: always the best/worst. RT @SheridanScribe “What impresses me about Mike is he enjoys playing this game.” — Chip Kelly

If you read enough about the Eagles, people make them sound like the Hyperloop of the NFL. Whether Coach Elon Musk fails or succeeds, you get the feeling it’s gonna be spectacular, what with Pirates of the Caribbean, running back leashes, gibberish press conferences, and so much more. It’s not even September and he’s already pissing people off. From the Wall Street Journal: “As Kelly mans his first full week of NFL training camp, installing a high-revving Ferrari engine into the Eagles’ offense, league insiders say there are exactly zero indications NFL referees will be willing participants in the Kelly era.”

It’s going to be so much fun. Other things to keep in mind with the Eagles:

• Their defense should be pretty horrendous, which means the offense is going to have be extra great to keep this team decent.

• I’m pretty sure 30 percent of the team tore their ACLs in the last three weeks.

Vick and Cooper are the Murtaugh and Riggs of our time. E-A-G-L-E-S.

Expectations are actually pretty high for this team, specifically for Chip Kelly’s offense, which should be fun regardless of what happens.

If it works … then the Eagles should be one of the most entertaining teams in football this year. You’d have a rejuvenated Michael Vick, DeSean Jackson tearing defenses to shreds, and then LeSean McCoy doing evil LeSean McCoy things.

The Eagles offense should’ve been great last year. There’s just too much speed and talent for them not to explode on people. Throw in an offensive mastermind to drive defenses insane, and it should be pretty outrageous. There’s no such thing as too many ridiculous offenses in the NFL, so if it all comes to fruition, it’ll be hard not to love watching the Eagles every week, if only to see what cracked-out concepts Chip Kelly throws together during every trip to the red zone.

If it doesn’t work… well, Chip Kelly has spent the entire preseason giving vague press conferences full of #Chipisms, dancing around questions about his methodology, adding extra practices to the weekly schedule, and generally acting like the coaching mastermind that everyone assumes he is. If this doesn’t work, things could get especially disastrous. There’s the hopeless defense, the injury-prone quarterback, the receiving corps that’s basically DeSean Jackson and anyone else they could find … this team could be awful. We love Chip Kelly for carrying himself like the Wawa Nation Bill Belichick, building an offense that’s set to run on methamphetamines, and potentially starting a war with NFL refs. But this is a fan base and media that’ll turn on Chip SO QUICKLY the second things start going in the wrong direction. It’ll be supersonic, even.

Either way: In a league where 80 percent of the teams are interchangeable, the Eagles are one-of-a-kind. I can’t wait for the regular season to start just so I can gawk at whatever the hell happens with this team. You may not understand what the plan is, but you don’t need to. Chip’s in charge!

One way or another, it’s gonna be fun.