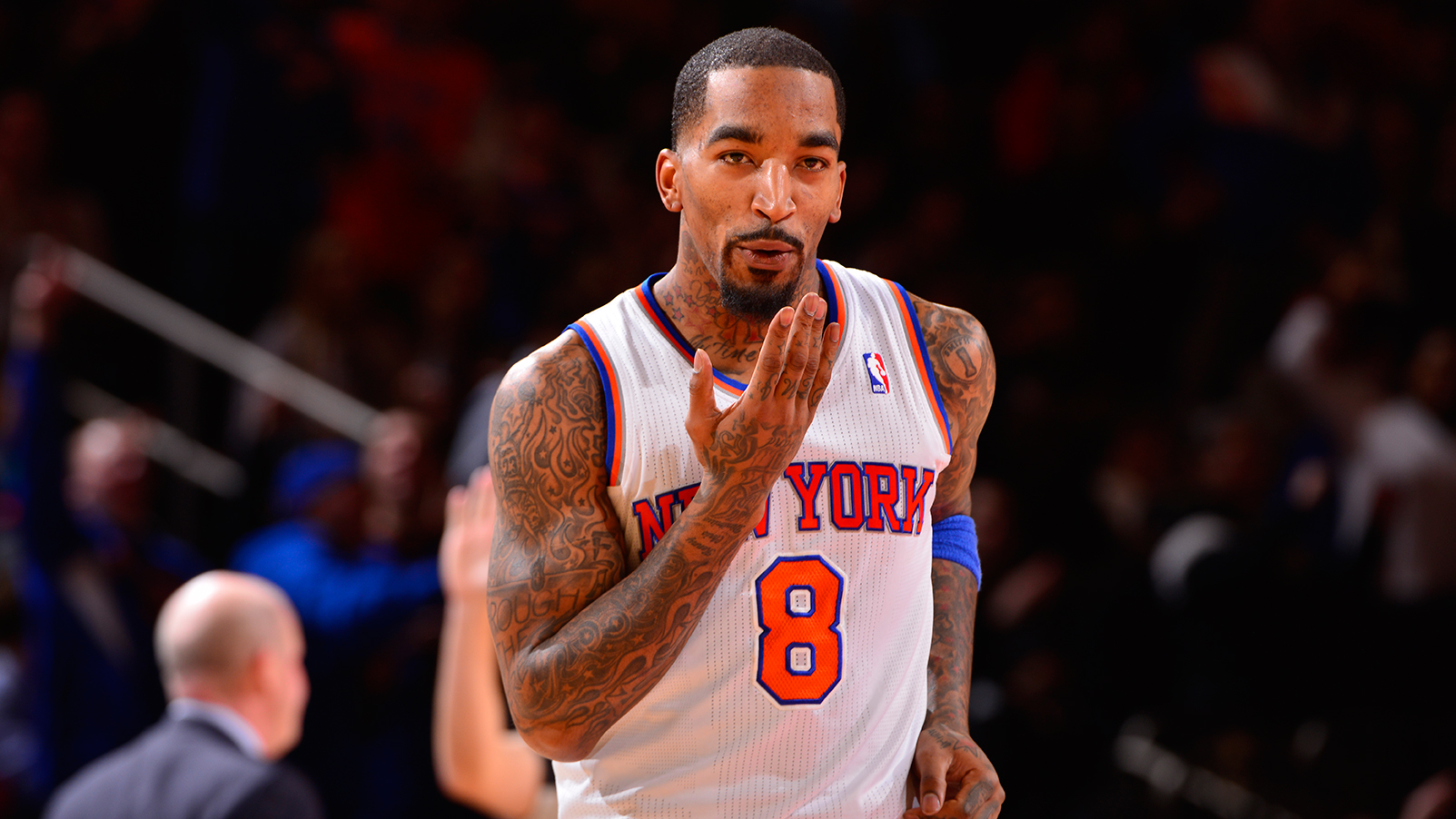 Good-bye, J.R. Smith
Though I never knew you at all
You had the grace to tweet, “You trying to get the pipe?”
While those around you balled
They partied out at Greenhouse
And they whispered into your brain
They set you on the treadmill
And they made you change your name from “Earl”
And it seems to me you lived your life
Like a candle in the wind
Never knowing who to cling to
When the rain set in
And I would have liked to have known you
But I can’t get into Liv
Your candle burned out long before
Your legend ever did

So, this is it. The end of the J.R. Smith era. No, really! This has been your era. Sure, you were never the best player on the team, or even the most important. (Those would be Carmelo and Tyson Chandler.) But in my mind, sports eras are defined by the players who create the memories that come most quickly to mind, and nobody created more such memories than you. Nobody even came close. That many of those memories were not, in the strictest sense, directly related to an ongoing NBA basketball game only makes it more fitting.

You were a mirror that reflected the essence of the franchise — a team that was never as good as it thought it was, ready to cut corners in service to a goal (which invariably resulted in not achieving the goal, and waking up in a daze, surrounded by snipped-off corners) — and yet, not without significant natural charms. That’s J.R. Smith; that’s the Knicks team I know.

For Knicks fans like me, too young to have experienced Walt Frazier, the phantom prince of New York nightlife, you were the next best thing. You gave me, just as Clyde gave fans in his day, vicarious entrée to a kind of city life accessible only when you know the bouncers by their first names.

I can hear those old-time Knicks fans now — How dare you compare J.R. Smith to Clyde! Clyde is the greatest Knick of all time! Of course he is. Sometimes it seems the best of New York — the realest, most live-wire, can-you-believe-we-live-here electricity — was long ago used up. All that’s left is the press that prints the money off its memory. Those Knicks fans had it all. They got to see the only two Knicks titles ever, both over the Lakers of Wilt and West, all in the age of free love and great drugs — the New York State Thruway is closed, man! Eventually, they settled down in the homes in SoHo, or the East Village, or on the Upper West Side, that they’d bought on single incomes, back in 1967, for 30 grand, and started spending their weekends upstate or out east, telling us, Don’t do all that stuff we did back then — it’s bad for you. And, god, is this Knicks team a disgrace.

And, OK, they’re right. But, dammit, I rent my apartment, and, you, J.R. Smith, belonged to the city as much as those great Knicks did, for better or for worse. After the success of the ’70s was squandered, after Ewing’s knees finally crumpled under the weight of carrying the franchise, we inherited this team, just as sure as James Dolan did. Clyde signified his wealth and status with a sleek and urbane European luxury vehicle. You got around town in a $450,000 Gurkha F5 armored personnel carrier, made by a Canadian company that, according to Wikipedia, supplies military vehicles to Saudi Arabia, Egypt, Jamaica, Iraq, and police departments in the state of Virginia. That the APC then turned out to most likely not belong to you is somehow all the more fitting of the times. You rent too.

The relationship I have with the team — and I think I’m similar to many Knicks fans in this regard — is like the relationship one has with a family member who is a fuckup. They make you so insane that sometimes you don’t want to see them, but you never stop pulling for them, and you hope they get their act together. (This is something I think you know about as well.) What Knick has embodied that spirit more than you?

Then there are those memories.

You came to New York after playing pro ball in China, where you would do stuff like incessantly order room service just to see if they would keep bringing food, which is something I’m pretty sure I tried on a high school trip to Busch Gardens.

You showed up with hair that looked like the freaking Nazca Lines. Less than a month later, and in keeping with the previous example’s theme of massive works of natural wonder, you tweeted a picture of a woman in full repose on, I presume, your hotel bed, her bethonged ass resplendent like the Great Smoky Mountains at dusk. For this, you were fined $25,000 and got into a minor beef with Joe Budden. It’s always fun to remember Joe Budden.

A few weeks later, you rode bikes around Manhattan in the middle of the night with a bunch of randos you met on the Internet. You played basketball with the Power Rangers, which is actually a real thing on my bucket list. As a busy professional, you had no time for the complex Kabuki dance of social cues that could lead to the act of human sexual congress — thus was born “You trying to get the pipe?” My low-key favorite part of that particular exchange of DMs is the way you let an hour and a half go by before making your move. 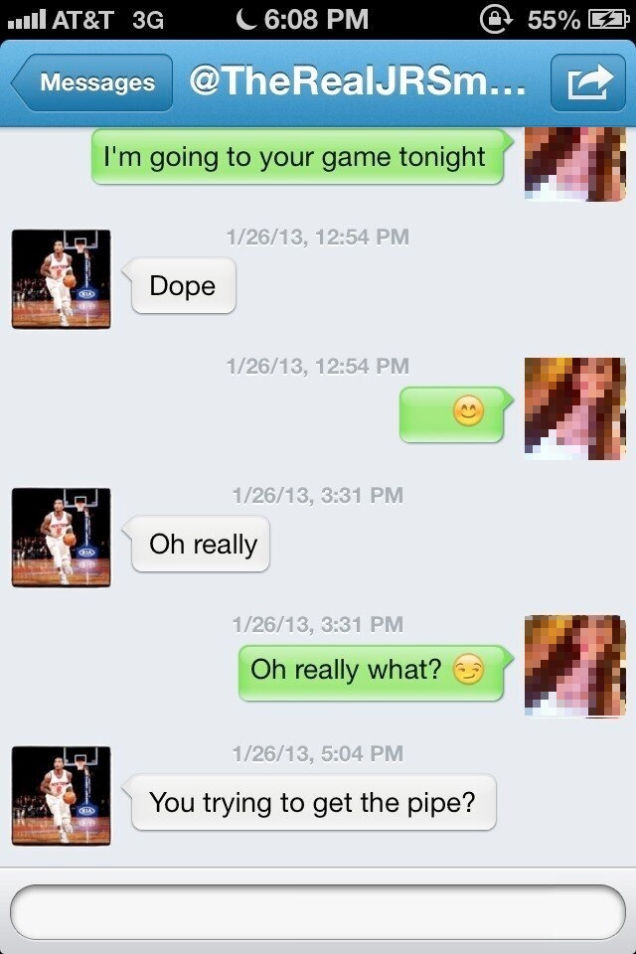 But it feels weird to talk only about what you gave us off the court, when your on-court contributions were just as important.

You played stifling defense on inbounds plays during Madison Square Garden’s commercial-break kid’s games. You won Sixth Man of the Year in 2012-13, averaging 18 points and five rebounds off the bench, and the Knicks won 54 games, the best win total for the team since 1996-97.

Then the playoffs rolled around. In Game 3, versus the Celtics, you elbowed Jason Terry in the head, enraging Doc Rivers, and got yourself suspended. Your shooting percentage plummeted from 44 percent to a John Starks Game 7 of the Finals GIF. You chased Rihanna as a castaway chases visions of faraway water in the desert heat.

A career 42 percent shooter, you shot only 39 percent on Sundays, which I’m guessing has something to do with Sunday coming after Friday and Saturday and those games taking place relatively early in the day. In 2012-13, you shot 34 percent on Sundays. (That’s probably my favorite stat ever.) You parlayed your Sixth Man season into a $24 million contract extension, a promise from the Knicks to sign your brother Chris (a legitimately nice guy, who was perhaps the worst player in the NBA that year), and somehow, inexplicably, a $533,135 trade kicker. You untied players’ shoelaces.

You were, in effect, the hero this city deserved. Just not the one we needed. In other words: the perfect Knick.

Take care, J.R.. I hope the clubs in the Rust Belt are up to your exacting standards.