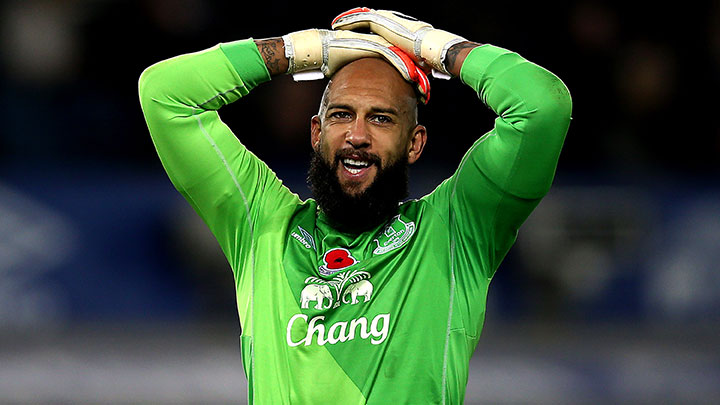 Hey, remember Tim Howard? Just six months ago, he was the toast of America, the guy standing on his head at the World Cup, making save after save, becoming the Secretary of Defense, and being the only thing between the U.S. going home against Belgium … and the U.S. going home half an hour later against Belgium. Howard briefly became a household name, and based on his performance in Brazil, he seemed like the surefire best American player alive and one of the top keepers in the world.

After declaring a yearlong hiatus from the national team to focus on club play, Howard has … well, he hasn’t been very good. Maybe there’s a reason none of those #ThingsTimHowardCouldSave memes included “shots from Everton’s opponents.”

Right now, Howard’s out for somewhere north of a month with a calf injury, but before he went down during a match on Boxing Day, he was the proud owner of the worst shot-stopping record in the Premier League. Through the day after Christmas, 45 percent of all the shots on goal Howard faced ended up in the back of the net. Last year that number was only 25.8 percent, third-best in the league. So there you have it: The body snatchers kidnapped good Tim Howard, replaced him with awful Tim Howard, and Everton now must suffer the consequences.

Well, no. That save percentage number? It’s useless when judging a keeper. So much of what defines save percentage is fundamentally out of a keeper’s control that it vacillates wildly from year to year. And even the players who consistently post the best save percentage numbers tend to do so only because they play behind top-notch defenses. First and foremost, save percentage is dictated by the kinds of shots keepers face. And a quick look at data from Everton reveals exactly how much harder Howard’s job has become this season. Here’s a graphic from Paul Riley (whose work focuses both on Everton and on keepers in general) showing the shots on target, with goals marked in red, that Howard faced last season: 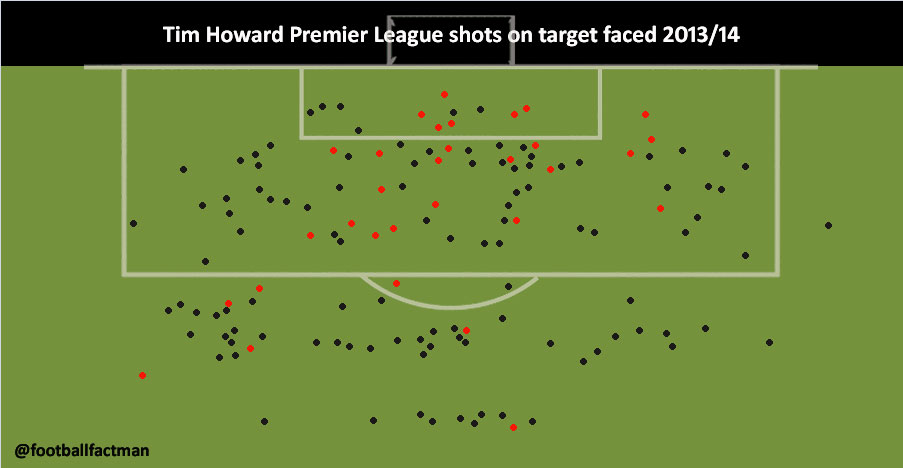 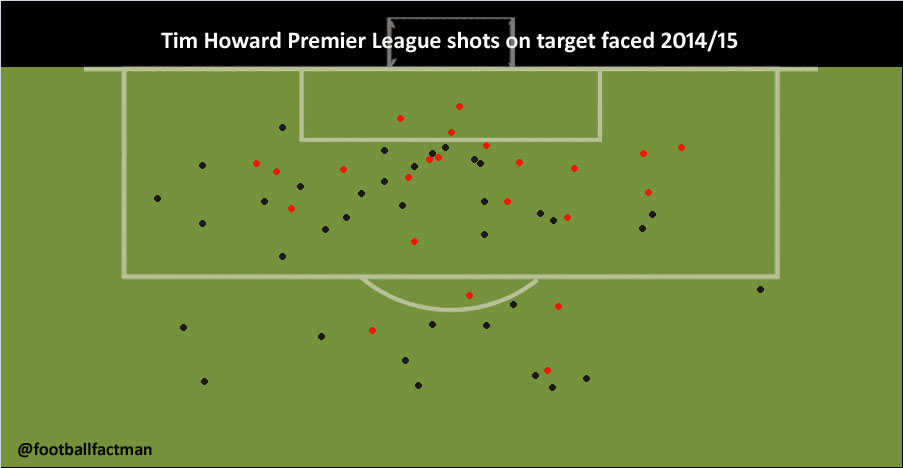 The major difference: All of those shots on target from outside the box, the ones that need to be corner-finding screamers to beat a top-level keeper, don’t exist this year. In fact, Everton’s opponents are only getting 15.4 percent of the shots they take from distance on frame. That’s the second-lowest percentage in the league.1 And of the shots taken from distance, 39.3 percent are actually blocked by Everton players, sixth-highest in the Premier League. Blocking shots isn’t a problem, either; it’s a good thing. Blocked shots don’t end up on target, and shots that don’t end up on target can’t end up in the back of the net. The side effect, though, is that Howard doesn’t get a chance to save these low-percentage shots that would allow him to improve his save percentage.

Despite all the blocked shots, there’s clearly something wrong with Everton. I mean, this was a team expected to, at the bare minimum, contend for a Europa League spot that has instead conceded more goals than any team not named Queens Park Rangers. If we dig a little deeper and look at who’s actually blocking all of those shots from distance, the problem starts to come into focus. A quick look down Everton’s roster shows that James McCarthy is the team’s leader in blocked shots with 0.45 per 90 outside the penalty area, followed by center backs Phil Jagielka and Sylvain Distin. Either it’s McCarthy, who has been in and out of the lineup with a hamstring problem over the last two months, or it’s the defenders.

While we’re talking about very small numbers — basically, less than a block every other game for McCarthy — what we’re really interested in is who’s patrolling the area outside the Everton box. Who’s there to force an attacker to spray it wide rather than shoot? Who’s there to cut down an angle and prevent the shot from happening altogether? It’s an imperfect science, but when you compare Everton to other teams that block a lot of long-range shots, the issue becomes clear.

Crystal Palace have blocked 40 percent of shots from distance. Their leaders — Mile Jedinak, Joe Ledley, and James McArthur — are all central midfielders. Aston Villa, at 40.3 percent, are led by Kieran Richardson, Fabian Delph, and Ashley Westwood — again, no central defenders.2 You get the idea.

Asking your defensive line to patrol too large of an area is one of the surest ways to concede a raft of goals — and that, especially with McCarthy out, is what Everton are doing. Whether it’s a change in scheme, Gareth Barry getting a year older, or really just down to having McCarthy on the field more often, last season Everton allowed more shots on target from distance, didn’t have their center backs running all over the place, and were a much healthier defensive team. 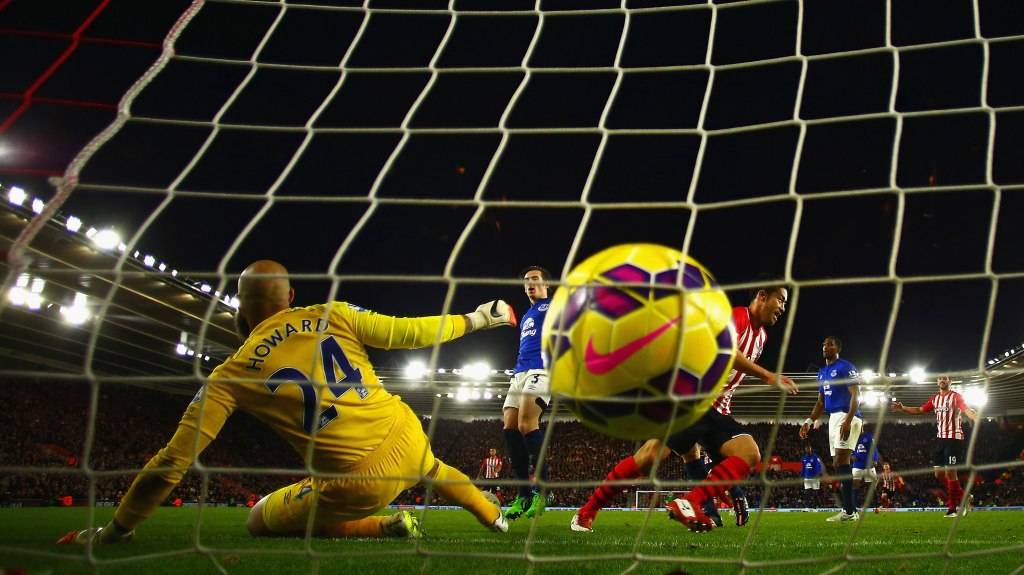 Roberto Martínez is no stranger to defensive problems. In fact, his Wigan sides were plagued with them. One of the major Martínez selling points is that he found ways to win on a low budget without being able to build a stout and resilient defense. His defensive strategy starts and ends with not letting the other team have the ball, while his attacking strategy relies on enticing the other team to come get the ball and then playing it around them into space. As such, his answer to everything has always been to put more skilled players in traditionally defensive positions. Whether that meant full-backs as part of a back three or wingers as part of a double pivot in defensive midfield, Martínez was not afraid to up the ball-possession ante.

That’s what appears to be happening at Everton as well. As the run of dire results continues, Martínez has made all sorts of changes. He has experimented with left back Leighton Baines in midfield. Against Hull on New Year’s Day, he trotted out a back three that included Barry, whose dismal attempt to play an offside trap resulted in Hull’s second goal. By the end of the game, forward Steven Naismith was sitting in central midfield as Martínez desperately tried to jump-start his team’s attacking momentum.

Maybe, as an overall, long-term strategy, Martínez’s approach will work. He’ll right the ship, get his players to keep the ball, and create the chances he expects to create. But all of those steps he’s taking, all of the ways in which Martínez strives to create a team that looks and plays differently than everybody else? They also invariably impact the kind of shots his keeper faces. And for now, he’s doing his keepers no favors. So when Howard comes back, he’ll be stepping right back into the firing line. When you’re facing that difficult a task? Well, you can only stand on your head for so long.