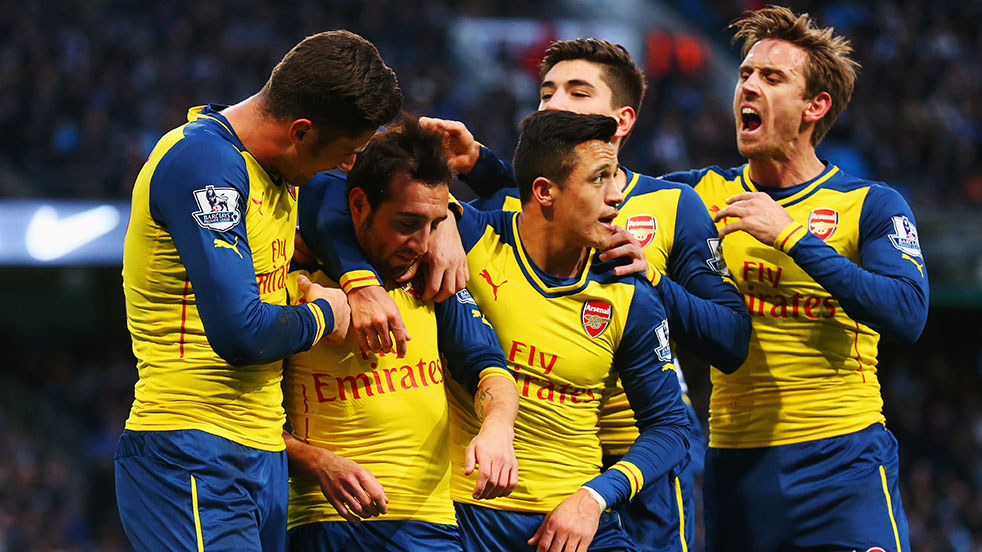 Yesterday, Arsenal — yes, that Arsenal — scored a comprehensive 2-0 road victory over Manchester City. It’s the most impressive win of this Premier League season, and, well, we’re still not sure it actually happened. Here’s a roundup of the results and all the ramifications of Wenger going Full Mourinho.

Olivier Giroud, Sliding Into Your DMs

Mike L. Goodman: Playing more conservatively on the road against one of the best two teams in the league should be a matter of course, not a matter of note. Last year, Arsene tried to Arsene at the Etihad and ended up getting blown out 6-3. So let nobody say that Wenger doesn’t, eventually, learn his lesson. Arsenal had only 35 percent of possession yesterday, often dropping everybody back into their own half to defend the lead. For most teams, ceding possession after taking a lead isn’t notable, but Arsenal — being Arsenal — are usually just as insistent on having the ball when they’re winning as they are when they’re chasing a result. Instead, Arsenal won on the back of a gritty defensive performance paired with a penalty and a set-piece goal. Until we see that again, I’m calling it the Anti-Arsene.

Jason Concepcion: While the final scoreline was surprising, the way the Gunners went about achieving it was practically surreal, like something out of one of those body-switching movies. Arsene Wenger’s trademark free-flowing, possession-based, offer-your-throat-to-the-wolf style of play — a style that resulted in jugular-spurting bloodbaths against Chelsea, Liverpool, and, as mentioned, City last season — was gone. In its place was a strangely disciplined and unnaturally muscular Arsenal team. No player best embodied that “who the hell are these guys?” ethos better than Santi Cazorla. The tidy two-footedness and elfin close control was there, of course. But you expect that. What you don’t expect is Santi tracking back, closing down players, and executing clutch, technically perfect tackles at the edge of the area.

Go ahead and dance, Santi. You deserve it.

The Future of Alexis Sánchez

Ryan O’Hanlon: This was the first Arsenal game I’ve watched this season in which Alexis Sánchez and Alexis Sánchez’s Thighs weren’t, by a good margin, the two best players on the field for the Gunners — and it might’ve been the first one where they didn’t have to be. Most weekends, the Chilean has looked quicker, faster, fitter, stronger, and sharper than any of his teammates, willing them to results with a lower body that never stops moving. The dude’s been unbelievably good so far — becoming the Zoe Kazan to Liverpool’s Daniel Radcliffe in the process — but a game in which Sánchez didn’t have to leave second gear must’ve been a nice gift for the legs that have carried Arsenal all season long.

Goodman: Remember, right around New Year’s, when the race for the title was going to be a nip-and-tuck affair that’d go down to the wire? Well, so much for that. For City, one point combined against Everton on the road and Arsenal at home just isn’t enough to keep up as Chelsea begins to absolutely dismantle teams again. It just so happens, though, that City’s next league game is at Stamford Bridge on January 31. A couple of weeks ago, that was supposed to be a battle for first place. Now, as they’re five points behind, it looks like it may be City’s last stand. A loss will put them eight points back with 15 games to go — and while that may not be insurmountable, it’d take something resembling a collapse from Chelsea to put the title back in play.

Whoever Didn’t Think to Get Yaya Touré That Birthday Cake

O’Hanlon: It wouldn’t be fair to say that City didn’t win this game because Yaya Touré didn’t play. But, well, City haven’t won any games this season when Yaya Touré hasn’t played. Now, Sergio Agüero and David Silva — maybe the best striker and the best attacking midfielder in the league — were still on the field at the Etihad, but without Touré driving down the middle and the threat of him spitting a fireball from distance, there’s just less space for those two to operate in. For all the depth that City (or any of their funny-money brethren) have acquired, losing a single player can still pretty easily throw things out of wack. Money can’t buy continuity, I guess.

Goodman: Thanks to Arsenal’s lack of depth and abundance of injuries, Chambers has frequently been thrown to the wolves this year — starting the season at center back, filling in for long stretches at right back, or more recently starting in the central midfield. And yet, in by far Arsenal’s most impressive performance of the season, there was Chambers sitting on the bench. With first-choice right back Mathieu Debuchy again sidelined with a long-term injury, another 19-year-old, Hector Bellerin, was picked ahead of Chambers. And in the midfield, Francis Coquelin, who had been on loan at mighty Charlton Athletic in the Championship, wreaked havoc. Chambers was a long-term purchase, so this isn’t exactly cause for alarm. But if he can’t get in the team ahead of Bellerin and Coquelin, he’s probably not quite on the cusp of Premier League stardom.

Updated EPL Top 4 projection. Big win for Arsenal is bad for everybody else. pic.twitter.com/ebZYW17tky

Arsenal have underperformed their underlying numbers for most of the season, and despite sitting outside the top four for a good while now, they’ve still been projected to finish relatively snugly within the Champions League places. With Southampton, United, Tottenham, Liverpool, and West Ham all picking up three points, this was supposed to be the weekend when Arsenal — playing what was probably their toughest remaining fixture — briefly stumbled back down the table. Well, nah. Arsene Wenger’s trademark, casual, second-half-of-the-season drift into Europe is already alive and well.

Goodman: Once a player gets a reputation as an elite defender, it can be pretty hard to shake. Vincent Kompany is sure doing his best, though.

So much of what center backs are asked to do goes unnoticed, and so much of what’s noticeable has to do with the system they’re asked to play in. But the days of Kompany as a reliable rock at the heart of City’s defense are over. He’s committing the fourth-most fouls per 90 minutes (1.61) of any defender playing more than 1,000 minutes,1 despite his team leading the league in possession.2

That being said, Kompany is still very, very good. He’s just the most visible defender on a team that frequently pushes its fullbacks and midfielders high up the field, leaving its central defenders on an island. On any clearance, Kompany and his partner become both the first and last lines of defense. He’s regularly asked to cover more range than almost any other central defender in the world, and he still, mostly, manages. But with the way City play, “mostly” often isn’t enough.