Praising Adam Dunn (While We Still Can) 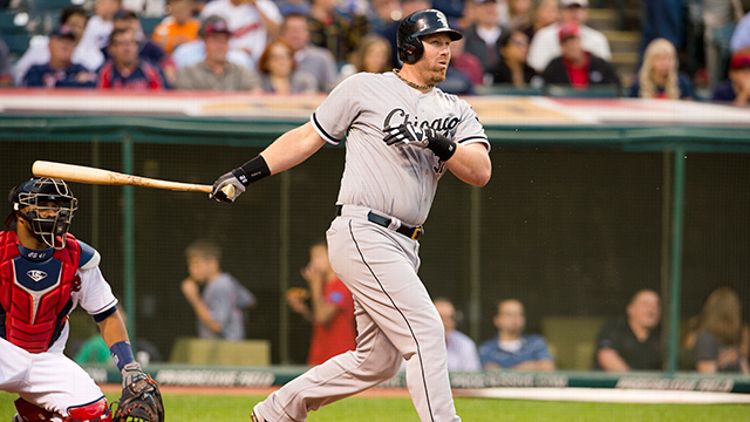 There’s a video that has made the rounds over the past few weeks in Internet Baseball Land. It’s a compilation of some of the longest home runs of the past 40 years — well-edited, no B.S., just call after call of obscene dingers.

You can probably guess some of the names called out in the video’s 18 minutes and five seconds. There’s McGwire and Sosa, Manny and Papi, Bonds and Reggie, Cecil and Prince Fielder, all the biggest power-hitting stars of their time. When Bonds splashes bombs into the Bay and Cecil parks ball after ball on the roof at Tiger Stadium, we hear announcers lose their damn minds.

But there’s one player who appears over and over in the video, launching titanic blast after titanic blast. The oddest thing happens after each of those moon shots: The announcers sound completely unimpressed. Some of the longest home runs of this generation, absolute rockets smoked to parts of the ballpark no one else can reach, and the batter might as well have grounded out to second, given how little enthusiasm those home runs produce. If you were an alien who’d just landed on Earth and you wanted to get a representative snapshot of Adam Dunn’s career, you could watch this video and be done with it. The 500-foot home runs, flairless trots around the bases, and apathy from those watching — over and over and over.

On Wednesday, news broke that Dunn is considering retirement. He’s just 33 years old, still cranking more home runs than nearly anybody else, and due to make $15 million in the final year of his contract next season. But the rapid and ugly fall of the White Sox has him contemplating the end.

“Winning is everything, especially now,” he told Fox Sports. “That’s why it’s so tough. The expectations that not only I had, but we had as a team, were really high. For this to happen, I don’t like the word ‘devastating,’ but it’s probably tougher to handle than most. … If it’s looking like it’s going to be one of those ‘Oh boy’ kind of years, that’s going to determine a lot.”

If Dunn is about to retire, we need to acknowledge his contributions to the game: He was one of the best power hitters of his generation, and a three true outcomes king.

Dunn broke into the big leagues in 2001 and raked immediately, hitting .262/.371/.578, with 19 homers in just 66 games. Twelve years later, he is sitting on a career batting average of .239, but with 436 homers (41st all time). Since that 2001 debut, Dunn has posted the 12th-best isolated slugging (slugging average minus batting average) mark among 673 qualified hitters, ahead of big-time sluggers like Larry Walker, Jason Giambi, Ryan Braun, and Frank Thomas. Now get this: In his career, Dunn has homered once in every 14.7 at-bats. That’s the ninth-best mark of all time, trailing only Mark McGwire, Babe Ruth, Barry Bonds, Jim Thome, Ryan Howard, Ralph Kiner, Harmon Killebrew, and Sammy Sosa.

Home runs, under normal circumstances, are exciting. But if Dunn’s swats seem to put announcers to sleep, blame it on his size, and his personality. Recruited to play quarterback at the University of Texas, Dunn opted for baseball instead when the Reds made him the 50th overall pick in the 1998 draft. Dunn wasn’t only enormous by baseball standards … he was also gigantic compared to other quarterbacks (not named Jared Lorenzen). When Ken Griffey Jr. used to wallop pitches over the wall, everyone oohed and aahed at his picture-perfect swing. When Dunn does it, it’s “Oh hey, that huge guy just hit another one. What’s on Ion tonight?” Throw in Dunn’s seemingly laconic demeanor (to outsiders anyway) and you have a player who’s not inspiring love poems any time soon.

Thing is, homers at least represent a big, loud result for an at-bat. When we talk about the “three true outcomes,” we’re referencing home runs but also walks and strikeouts — two of the most boring events in a baseball game. Dunn has walked 1,239 times in his career, the 52nd-highest mark ever. He has struck out a jaw-dropping 2,190 times in his career; only Reggie Jackson, Thome, and Sosa have whiffed more. Combine Dunn’s slugging ability with those walks and strikeouts, and you get a player who’s a TTO legend, both for his career …

… and for a single season …

There are certainly parts of Dunn’s game that deserve criticism. The high strikeout totals and low batting average aren’t that big a deal, not when a player walks enough to put up a .367 career on-base percentage. But Dunn’s been arguably the worst defensive player in the league over the past 12 seasons. If we’re talking single-season performances, Dunn’s 2011, in which he hit .159/.292/.277 with miserable defense on the rare days he didn’t DH (and glacial baserunning too), has a case as one of the worst years ever put up by anyone.

So sure, the man nicknamed “Big Donkey” for his lack of speed may not have been wildly entertaining by traditional measures. But if this it for Dunn, we should celebrate his planet-denting power, and even his status as a three true outcomes first-ballot Hall of Famer. More than a decade after Moneyball, the negative impact of hitter strikeouts remains overrated (in some circles), while walks are still underrated — and so is Dunn. His style of play has never been pretty. But for most of his career, it’s been pretty damn effective.