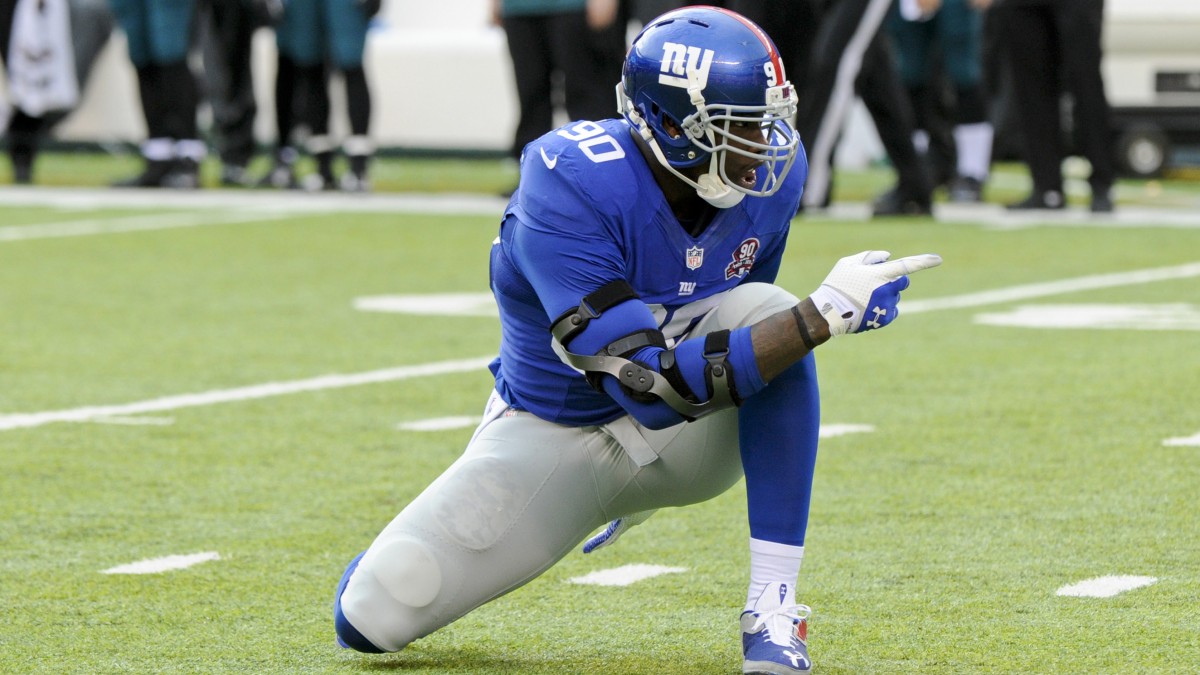 Sunday night’s Giants-Cowboys game was riddled with shifting fortunes, uncertain outcomes, wastes of money, and idiotic, should-have-known-better, what-were-you-even-thinking mistakes. While it was painful for New York fans to watch a win slip bizarrely from their grasp, though, they really ought to be used to it by now: It’s something the franchise has been dealing with since the Fourth of July weekend.

“Jason Pierre Paul rented out a whole uhal van full of fireworks and I’m currently scared for my houses safety,” tweeted a Floridian named Melissa on Independence Day, attaching a photo of boxes, marked with explosive symbols, stacked up haphazardly behind the window-stenciled words “Need a Van?”

Her house remained ostensibly untouched, but the star Giants defensive end was not: Reports with phrases like “flesh missing” and “nerve damage” began trickling in the next day about a fireworks accident suffered by Pierre-Paul. “Early indications are, hand injury is not career threatening,” tweeted Adam Schefter on July 5. Three days later, though, he was posting a screenshot of a leaked medical record featuring the word “AMPUTATION.”

The New York Giants knew that Pierre-Paul would be making a lot of headlines this offseason, but the team had assumed that most of them would revolve around the decision about whether to place the franchise tag on the 26-year-old pass-rusher, who racked up 12.5 sacks last season. While the decision wasn’t clear-cut, the Giants ultimately extended a reported $60 million long-term contract offer that Pierre-Paul coolly left on the table for months. In mid-June, he skipped minicamp workouts in an attempt to hold out for more money. “Skipping the workouts also helps him to avoid an injury,” explained the Associated Press’s Tom Canavan on June 16, “which would put a long-term contract at risk.” Man, those were the days.

The accident itself was odd enough — the franchise’s deals with the devil may have brought the Giants two epic Super Bowl wins, but the cost has apparently been a gunshot to the leg and an explosion to the hand — but the ongoing drama has been even more strange. With the contractual relationship between Pierre-Paul and the Giants solidly in “It’s Complicated” status, the interactions between the two parties have become about as mind-fucky and opaque as those text messages we’ve all exchanged with that one on-again-off-again-on-again-off-again flame.

Early on, with Pierre-Paul still laid up in the hospital, the Giants sent a peace- (and information-) seeking delegation down to Florida consisting of a trainer and former Giants linebacker and current “special assistant/consultant” Jessie Armstead. The pair hung around for two days, with Pierre-Paul refusing to see them, before giving up and heading back to New Jersey.

Several weeks later, in a wide-ranging Q&A between Tom Coughlin and Sports Illustrated’s Jenny Vrentas, the Giants head coach — whose “How can I help you?” text to JPP the day after the accident was never answered — expressed frustration with the impasse. “I don’t know what they think they are hiding,” he said of Pierre-Paul’s camp. “It only makes us, me personally, think the worst.” Even after finally speaking with Pierre-Paul in early August, Coughlin didn’t gain much insight into the situation. “Do I know anything more than I did before?” he asked. “No.”

It’s now mid-September, and we can make roughly the same assessment now as Coughlin did then. Last week, fleetingly optimistic reports that Pierre-Paul was hoping to take the field for Week 1 gave way to dark rumblings that he won’t be back this season whatsoever. According to Fox Sports’s Jay Glazer, Pierre-Paul felt he could play if outfitted with a club cast — like the one Green Bay linebacker Clay Matthews sported in 2013 — while the Giants took one look at his mangled paw (“worse than they were led to believe,” according to ESPN’s Dan Graziano) and sent him back to Florida to work out and gain weight, telling him to come back in six weeks.

Round and round it goes, endless fodder for horrible puns and lulzy tailgate shenanigans. But despite the WTFness of it all, there’s a bleak method to everyone’s madness. With Pierre-Paul’s contract status as yet unsettled, his camp has had an incentive all summer to remain strategically vague. Information gleaned from the July hospital visit could have been used against him. The more recent stalling was likely a tactic to help Pierre-Paul avoid official relegation to the non-football injury list, which would carry with it strict deadlines and procedures that have to be followed. As for the Giants, they appear not yet ready to cut ties completely and risk losing a player who, even in his depleted state, still might turn out to be better than any of their other existing options.1

The Giants beat themselves up offensively Sunday in their horrifying 27-26 loss to the Cowboys, but in addition to all the dumb playmaking decisions and dropped passes, there was one constant, defensively, throughout the game: Tony Romo had all the time in the world. There were no uncaged beasts flying toward him, no threatening arms (or club hands) in his face, no hilarious GIFs of him being laid out helplessly on his rear end. Pierre-Paul’s absence had its own presence.

Coughlin characterized Dallas’s final game-winning drive as “like a hot knife through butter” (hey, at least New York covered the spread?), but it remains sorta unclear whether to stick a fork in Pierre-Paul. We’ll have to wait at least another month, as we’ve been doing since July, for more information about whether he’s really, truly done. It’s safe to say, however, that this strange saga isn’t.