Phillies and Brewers Making a Lot of September Noise 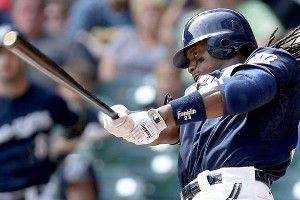 The Brewers have moved 9½ games closer to the National League’s wild-card spot in the past 39 days. The Phillies have also chopped 9½ games off their wild-card deficit in the past 37 days. Milwaukee now sits 3½ games behind St. Louis with 19 games to play, the Phillies four back, with 18 to play. If the Phillies pull this off, they’ll complete the biggest comeback in baseball history; if the Brewers do, they’ll end up just a tick short.

The first variable to consider is schedule. FanGraphs’ Dave Cameron already broke down the remaining schedules for all NL second wild-card contenders, effective Thursday. Short version: The Cardinals would seem to have the most favorable slate, with the Phillies and Dodgers just behind them, and the Brewers, Pirates, and Diamondbacks facing considerably tougher paths.

Cameron’s study uses weighted opponents’ winning percentage, which should be the most logical way to do an exercise like this … except it doesn’t always go according to plan. For one thing, teams can, and do, change over the course of the season. For instance, six weeks ago, the Padres were 19 games under .500, many of their most talented, young players were struggling, and you could clearly slot them in with the very worst teams in baseball. They’ve gone 25-12 since then, knocking off weak teams but also playing spoiler again and again, winning five out of six against the Pirates, five out of six against the Diamondbacks, two out of three against the Dodgers, and sweeping the Cardinals at home for the first time in 17 years. Similarly, the Rockies aren’t a championship-caliber team, but they’re 16-14 over the past month. The Phillies might have thought they had an easy sweep ahead this weekend hosting the worst-in-baseball Astros. But even Houston has shown flashes here and there, taking two out of three from the Reds earlier this month and winning Game 1 of the four-gamer at Philly on Thursday.

When the Rays were trying to pull off the biggest September comeback of all-time last year, they might’ve looked ahead at the final three games of their season and dreaded what they saw. The Yankees were the best team in the league, and figured to present a formidable opponent for a Tampa Bay team attempting a miracle. Instead, the Rays won the first two games of the series. Then, after the Yanks built a 7-0 lead in game three, Joe Girardi put in an all-scrub lineup to rest his regulars for the postseason. Making up a seven-run deficit in two innings is a hellacious task, even against nine forgettable players. But when the Rays did finally complete the sweep and earn their playoff berth, the great Scott Proctor was the one who gave up the winning run.

It’s conceivable, even likely, that teams with their playoff seeds already locked up might similarly lay down their arms at the end of the regular season this year. So if we get down to the final series of the season and the second wild-card race is close, teams playing already-clinched opponents may well have an edge over wild-card rivals facing out-of-contention teams that might be eager to play spoiler; we’ve certainly seen that movie before. So sure, give the Cardinals the edge for easiest strength of schedule by opponents’ record — not to mention their actual two-game lead over the Dodgers, their next-closest competitors. But beware the Pirates, who end their season against Reds and Braves teams who’ll almost certainly have locked up their playoff position by then; the Dodgers, who get three against the arch-rival but possibly indifferent Giants; and the Phillies, who play three in D.C. to end their season. (OK, the Cardinals end with three against the Nats and three against the Reds, so even by this argument they should be in the driver’s seat.)

So where can the Brewers and Phillies turn for sources of encouragement? For one thing, they’re playing better than they have all season, and that’s probably not just random variance at work.

For the Brewers, it’s been a combination of improved health, improved performance from several up-and-coming players, and a healthy dose of positive regression for one key star.

Milwaukee is a better club since getting Jonathan Lucroy back. He was enjoying the start of a breakout season, hitting .345/.387/.583 by late May. Then he hit the DL for two months, and a bad Brewers season got worse. In 38 games played since his return, Lucroy’s hitting .294/.366/.429, placing him near the top of the NL’s non–Buster Posey class of catchers. The pitching staff also got a few breakout performances. Mike Fiers dominated from his first start in late May, though he’s actually slowed down in the past few weeks. Marco Estrada took a little longer to kick into gear. The 29-year-old right-hander struggled in his first rotation audition early in the season. But after spending five weeks on the DL, he returned to strike out 12 Reds, looking like an entirely different pitcher. Including that start, Estrada’s struck out 91 batters, walked just 18 and allowed just eight homers in his past 83⅓ innings pitched, for a strong 3.46 ERA. You can add slightly improved luck to Milwaukee’s cheerier outlook. The Brewers are only 5-5 in one-run games since the start of August. But that’s a far sight better than the 18-24 record in one-run games they racked up from April through July.

But the biggest difference has been Rickie Weeks. Fifty years from now, scientists might wonder what happened to Weeks for the first three months of the season. He made his first All-Star team in 2011, cranked 49 homers during that year and the one before. And then, just like that, that power disappeared … along with any concept of the strike zone, ability to recognize pitches, or square the ball up and hit it like he had just a few months earlier. There’s BABIP regression, and then there’s looking more lost at the plate than just about any other hitter in the game, which made no sense for a player of his caliber. Then, just like that, the light flipped back on. Since his late-June nadir, Weeks has flashed an .879 OPS; he’s gone nuts in September, hitting .302/.351/.679, launching six homers in 12 games. In related news, the Brewers are 9-3 in September, playing their best right when other wild-card contenders are crumbling, and giving themselves a shot to do the unthinkable.

For the Phillies, it’s a lot simpler: This was always a team with tons of star power, only for much of the season, those stars simply couldn’t stay healthy and productive. Ryan Howard has never managed to even approach his old self, even after months of rehab and a couple more months of acclimating to everyday play. But Chase Utley has rediscovered a good chunk of his old pop and on-base ability, even if he’ll likely never again return to peak form. Roy Halladay isn’t quite what he once was, but at least he’s in the lineup, going six or more innings in nine of his 11 starts since returning from injury.

Jimmy Rollins never had injuries as an excuse — just the fact that he was 33 years old, and seemed headed for an ugly decline phase as a result. But his hottest hitting has coincided with the Phillies’ biggest run of the season: In the past two weeks, he’s hitting .296/.350/.556, with multiple huge hits in huge spots. With Rollins and unexpected contributors like John Mayberry and Juan Pierre raking, and the starting rotation finally asserting its dominance with Cliff Lee and Cole Hamels and even Kyle Kendrick mowing down hitters, this looks a lot more like the killer Phillies teams of the past half-decade. Even without Shane Victorino, Hunter Pence, and other key contributors from years past. Oh, and Erik Kratz.

Neither the precedent set by last year’s Cardinals and Rays, nor the gigantic bites Milwaukee and Philly have already taken out of their wild-card deficits should prompt you to bet the mortgage on either team completing their comeback and crashing the playoffs. But after months of abysmal play, you can close your eyes and at least trace the outline of the Brewers and Phillies teams that won their divisions in impressive fashion just a year ago. It might not be likely that they crack the postseason again. But at least it’s possible. Only their moms would have said that a month ago.

About Last Night: Pack Attack Does In Chicago

The Best B.S.: George Brett on His Best Basebrawls