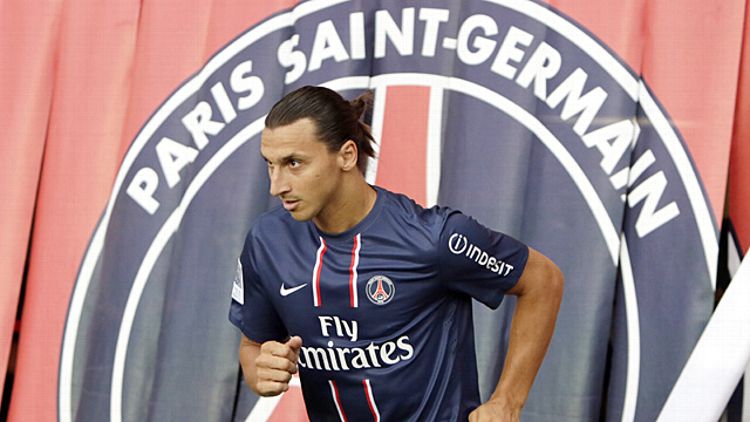 I arrived at Parc des Princes at about 3:45 on Saturday afternoon to watch Paris Saint-Germain take on FC Barcelona. I took the 9 train from the Champs Elysées to Porte de St. Cloud and exited the station with a compilation of ’80s music pumping through my headphones. When I reached street level I bought a scalped ticket for four times the face value and began a nostalgic walk to the stadium. It had been ten years since I last visited Parc des Princes. In those days I was a study abroad student at Sciences Po and PSG was a blip on the European football radar. But today I arrived four hours before kickoff because something new is in the air in Paris. PSG has spent more money than anyone in Europe this summer and since Qatar Sports Investment bought the team last season they have laid out over $250 million on transfer fees, with the majority of it — about $220 million — purchasing players from the Italian Serie A league. This summer alone, PSG bought Zlatan Ibrahimovic, Thiago Silva, Marco Verratti, and Ezequiel Lavezzi. It’s these kinds of arrivals that inspired PSG fans to surround team Director Leonardo’s car on his way to the stadium Saturday chanting “merci Leo” and causing him to miss much of the pregame pomp and circumstance.

At around 6 p.m., shortly after Paul Simon’s “Diamonds on the Soles of Her Shoes” stopped playing on my iPod, the PSG team bus pulled up in front of the stadium. By then I’d been standing outside over two hours in the unrelenting heat that claimed two faint victims. There were about 500 PSG fans who stood by eyeing every luxury vehicle wondering if Ibrahimovic was in it. They were hungry for something to cheer for and erupted into a chant of “Ici C’est Paris,” (this is Paris) as the players got off the bus and walked down a red carpet that seemed more fitting for the Cannes Film Festival than for a preseason match that would end 2-2, with Barcelona winning on penalties.

Few things scream “look at me” quite like new money. There were over 50 police officers outside the stadium and another 10 men in black suits lining the red carpet. PSG has been throwing its weight around since the infusion of Qatari money and even though they are the tenth most successful team in France, in terms of historical league performance, there is a sense surrounding the club that their time has arrived.

The loudest cheers on the red carpet were reserved for PSG’s eccentric young defender Mamadou Sakho and Ibrahimovic, who acknowledged the fans with a tip of his cap.

When I entered the stadium I settled into the Bleu Bas section and realized I paid 150 Euros for a nosebleed seat of a preseason friendly. Always know a stadium’s geography before you buy scalped tickets. I could hardly see the corner flag of the far section of the field because a large spiked metal barrier blocked my vision. Later I learned it was erected to prevent rival fans from fighting. But if there was a silver lining it was that I was seated next to some of the most raucous PSG fans. Over the next two hours the crowd would achieve a mid-season atmosphere.

The pre-game chatter from PSG’s players and their manager, Carlo Ancelotti, centered on this match being an opportunity to test themselves against the best side in Europe. Although Barcelona did not win the Champions League last season they still occupy a strange position as some kind of ideal that clubs should strive to for. Early on, PSG matched Barcelona’s pace and intensity and got the better of the opening exchanges, but in the sixth minute a mistake from Alex gifted Barcelona its first goal as Rafinha pounced on the Brazilian defender’s error and slotted the ball past Nicolas Douchez to give Barcelona a 1-0 lead.

For the rest of the first half Barcelona dominated possession and it was worrying for PSG that their standout player was Sakho who was tidying up messes all over the field as the Parisian side misplaced one pass after another in midfield. Their play in the attacking third was equally sloppy, as Ibrahimovic and Lavezzi failed to link up and the team resorted to sending long balls aimed towards Ibra that were either cut out by Carles Puyol or found the Swedish striker in an offside position.

The second half started with Barcelona continuing to dominate the proceedings and if their first goal came from nothing the second fell from the sky as Alexis Sanchez won a penalty for doing little more than slipping on the wet turf due to the rain that started at halftime. Leo Messi stepped up and dispatched the penalty to give Barcelona a 2-0 lead. At 2-0 I was ready to settle into thirty minutes of Barcelona steamrolling, but what happened next surprised me. The stadium transformed into a deafening echo chamber of whistles, rhythmic pounding on the metal barriers.

The persistent chant of “Ici c’est Paris” rang out around the stadium. The home team responded, first with a penalty that Ibrahimovic scored to bring the Parisians within a goal. As the second half progressed PSG started finding their rhythm and the crowd got louder and louder. Suddenly passes that were going astray in the first half started finding their targets. The pressure paid off in the 82nd minute when substitute Zoumana Camara headed home a Javier Pastore corner to tie the match at 2-2. By now I was worried that there would be extra time, as I was watching the match with an eye to make it home in time for the women’s 100m final of the Olympics. I was spared the extra time as the match went straight to penalties which Barcelona won 4-1.

It’s hard to draw conclusions from a pre-season match. But on the evidence of the 90 minutes Saturday night, PSG are good enough to compete against Europe’s best teams. And once their players settle in they will be dangerous.

The PSG fans seem equally up to the task, as their belief that this is their year will make Parc des Princes a difficult place to play this season. The caution of course is that this was just a preseason friendly; with all the substitutions, the game lacked balance at times. PSG were also playing a Barcelona side that hadn’t hit anywhere near top gear yet and the reality is that PSG still has a lot of work to do before they can be considered among Europe’s elite clubs. While they can buy almost any player they want, their trophy cabinet is still barren when compared to the likes of Saint-Étienne, Bordeaux, Marseilles, and Lyon. But it would not surprise me if Ancelotti’s message to his team this season is the same one that is inscribed on the team bus and on the stadium: “Rêvons plus grand.” Let’s dream bigger.

After the match I elbowed my way through the cluttered subway station to get home in time for the women’s race. Although I carry an American passport I always root for the country of my birth, Jamaica, during the Olympics. I got home just in time to watch Shelly-Ann Frazier-Pryce’s photo finish, as she took gold in the 100m, running as if she had diamonds on the soles of her shoes.

Filed Under: Barcelona, Soccer, We Went there

About Last Night: Don't Cry for Me, Argentina