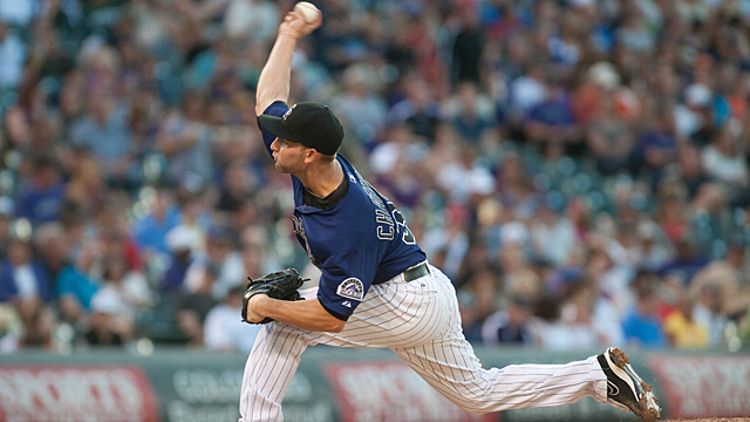 The Mets are bad.

The Mets also have the misfortune of being bad in New York, where it’s hard to escape notice. One of the people who noticed was radio talk-show host Mike Francesa; and, after a sweep of the Mets at the hands of the Colorado Rockies, he went on the air and let fly with pure aural schadenfreude.

That’s if you don’t care for the Mets or New York sports in general. Otherwise it was just a rant: “That Colorado lineup is a bunch of minor leaguers … The Mets are 12-30 in their last 42 games … They have not scored more than two runs in a week … You’re actually paying to watch this … Colorado came in and pitched their starting pitchers three innings. It was like watching a spring training game today … Can you imagine what the Rockies’ coaching staff is saying? ‘Can you believe we beat these guys?’ … I got Mr. Met on watch here, he’s so depressed.”

For full effect, it probably helps if you have someone spew spittle in your ear while the reading voice in your head speaks at nearly full volume.

Francesa’s comment about the starting pitching is a bit misleading, though. Only one Colorado starter in the series went just three innings. But the overall point stays intact: The Colorado pitching staff isn’t good.

Last year at the MIT Sloan Sports Analytics Conference, Greg Rubin, then an MBA student at NYU, presented a paper on something called paired pitching. The idea was that, if you were willing to abandon the currently entrenched model where a starter (hopefully) gives you six-plus innings before you turn it over to your bullpen, you could put together a pitching staff that was more efficient, would save about 95 runs a season, and cost less than half what Cole Hamels alone will run the Phillies for the next few seasons.

The idea was predicated on the fact that, over successive in-game plate appearances against a pitcher, a batter got better. From a batter’s standpoint, the first, second, and third plate appearance versus a starting pitcher looks something like:

So paired pitching seeks to do away with tilting the numbers more toward the batter by just eliminating that third matchup. Instead of a starter trying to go six innings or more, Rubin posited two pitchers going four innings (through the lineup about twice) each, with a more traditional closer for the ninth when necessary.

This isn’t as radical as it seems. The idea isn’t even originally Rubin’s; Tony La Russa dabbled with something similar (he called it tandem pitching) in the early ’90s with the Oakland A’s. Still, on June 20, with the team sitting at 25-41, Rockies GM Dan O’Dowd said “Screw it” and reconfigured the team’s rotation.

He probably didn’t actually say that. He did move to a four-man rotation. And while the rest of the Rockies’ implementation is conspicuously different from Rubin’s, the basic premise is the same: Eliminate the starting pitchers’ exposure to a third matchup against a batter. Rather than limiting pitching pairs’ innings at four apiece, Dan O’Dowd and the Rockies front office instead gave starters a 75-pitch-count limit. And it’s worked out to be almost perfect.

Over the past two weeks (since hosting the Brewers on August 13), Rockies starters have thrown an average of 75.38 pitches and faced 19.93 batters per outing (or just over twice through the order).

Where the Rockies have deviated, and done so somewhat dramatically, is with what happens after 75 pitches as there isn’t a true piggyback paired with the starter.

On cursory glance, the Rockies seem to be winging it — or using relievers in more traditional, situational roles — to get through the rest of the game. After the starting pitcher is done, O’Dowd (through Jim Tracy) is playing Coltrane to Rubin’s Richard Rodgers.

But looking closer, there is a definite Plan B for the Rockies. Rubin’s Paired Pitching paper underscores both the genius and pitfalls of using just math to make managerial decisions.

In discussing some of the feedback he got from teams that showed interest in his idea, Rubin highlighted something he hadn’t considered: “It won’t work because the reason relievers are relievers is that they haven’t mastered a third pitch with which they can find success the second time through the lineup.” Even limiting the second guy to twice through the lineup is going to be problematic, because he doesn’t have the same toolbox as a true starting pitcher.

That’s something the Rockies seem to have understood and incorporated into their rotation modifications. Using the same time frame (back to August 13), the average number of batters faced by the first reliever is 8.29. And in five of those 14 games, the first reliever faced exactly nine batters — precisely once thought the lineup — before being pulled. After the starter, nobody is facing the lineup more than once.

So is it working? Again, the Rockies started this back on June 20 — and with the Euros and the Olympics and the fact that it’s the Rockies you’re forgiven for not having noticed they have gone in on this — when they were 25-41 (a .379 winning percentage).

Since then they are 26-34. Good enough for a .433 winning percentage. That’s still not great, but it’s better.

Moreover, starting with the next full series after June 20 (at Texas), of the subsequent 18 series, 10 have been against legitimate playoff contenders (11 if you count the D-backs, who are 5.5 out of the NL wild card). So they are playing better against decent competition, right?

Maybe. Ten of those 26 wins have come in the past four series against the Brewers, Marlins, Mets, and Cubs, all of whom are already playing out the string. Still, wins against bad teams count the same. And, perhaps most importantly, the team ERA is down: It was 5.16 in June and 4.75 in August (thus far) and that’s with roughly the same percentage of games home and away each month.

And that points to one of the problems inherent in paired pitching or the Rockies’ mutant half-brother variation thereof. It takes a certain profile pitcher to buy into it, and that profile is roughly: “not great.” Francis might seem pretty decent, but he’s a few years removed from the guy he was during 2007 when the Rockies went to the World Series. In June of this year he was pitching for the Reds’ Triple-A affiliate, the Louisville Bats. White, Pomeranz, and Chatwood are all in either their first or second full year in the majors.

So it takes guys who are either on the way up or the way down (or maybe some guy like Rich Harden, who could never throw more than 90 pitches without ending up on the DL), but there is no way a top-of-the-rotation ace like Jered Weaver (or his agent) would go for being shut down after 75 pitches. Hell, one of the reasons La Russa failed in the ’90s was because the pitchers were openly hostile to the arrangement.

Still, the Rockies’ experiment seems to be working for now, if only a little bit. If nothing else, it has shown the Mets that just because you’re bad, it doesn’t mean you also have to be stupid.

The Huddle: Vontae Davis Is the Instrument of the Colts' Liberation (Also: Pay Wes Welker, and Jerry Jones Pizza Rap)