Optical Illusions: A Look at the Recent Past and Near Future of the Raptors’ Brand Identity 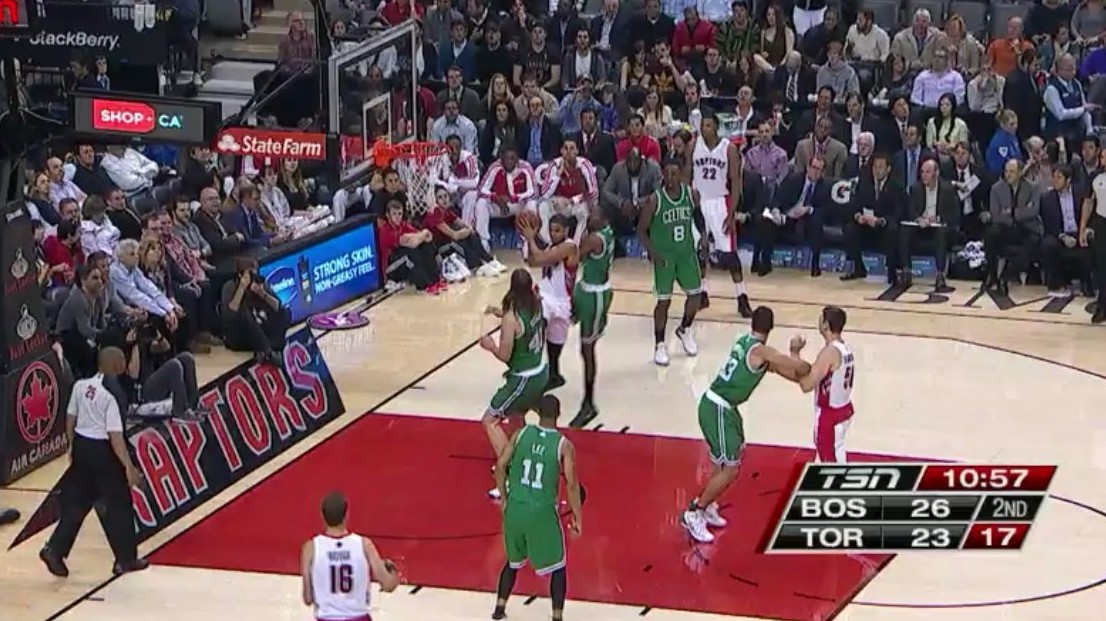 In the late ‘70s, Steve Marcus, the chairman of the Milwaukee Exposition Convention Center and Arena (MECCA) board, noticed that the paint on the basketball floor of the MECCA Arena was wearing off. Out of the blue, he toyed with the idea of commissioning a world-renowned artist to come up with a new look for the parquet, which was home to the Milwaukee Bucks and the Marquette men’s basketball team. The result was pop artist Robert Indiana’s iconic MECCA floor design, a dizzying showcase of reds, oranges, yellows, blues, and the strange geometric shapes that brought the entire work of art together. The floor was a success, and so were the Bucks who played on it — from 1977, when the floor was installed, to 1988, when the Bucks moved to the Bradley Center and abandoned the MECCA design, the Bucks reached the conference semifinals in all but two seasons, and played in three Eastern Conference Finals.

In 2011, the Toronto Raptors unveiled a 3-D logo painted on the baselines of the Air Canada Centre floor, the first of its kind in North American sports. It’s an optical illusion. From the upper bowls and from the TV broadcast perspective, the logo, which appears slanted up close, looks like a three-dimensional stand with the Raptors lettering.

It was lobbied for heavily by then-GM Bryan Colangelo, who imported the idea from his scouting trips to Europe, where he was enraptured by how arenas overseas were using 3-D paint to shill (in 3-D and Technicolor!) for their corporate overlords. If you’d followed Colangelo’s work with the Raptors, the idea that he, who attempted to turn the Raptors into a running and jumping Marshall Plan, found new possibilities abroad shouldn’t be a shocker. He oversaw the selection of Andrea Bargnani, who became the first European player ever to be drafted first overall in the NBA, back in 2006. Now, the 3-D design didn’t reach the depth of loathing that Bargnani’s mere existence brought to Raptors fans, but that’s admittedly not a very healthy standard to compare anything to. Other than the initial news cycle reporting on its existence, and a hilariously ill-informed rant from a Chicago writer last year, it’s been hard to conjure any real emotion for the court fixture. In time, it was, just like everything else in the Colangelo era, subsumed by the crippling mediocrity that defined the Raptors. It was a change brought about specifically to differentiate the Raptors from the field; it ended up being a sticker slapped on top of the status quo.

The logo doesn’t appear to be long for this world. “To be honest, we’re evaluating that right now,” said Shannon Hosford, vice-president of communications and marketing for Maple Leaf Sports and Entertainment, which owns the Raptors and the Air Canada Centre. “We’re taking a new direction under our new GM and defining our brand and who we are. So I’m not sure if [the 3-D logo] is something that lives on.”

Things change quickly in the NBA. It’s been less than a handful of years since the 3-D logo was introduced, but it already feels antiquated. So much has happened since Colangelo left his post as president and GM a year ago. In a matter of months, successor Masai Ujiri cultivated a roster that was not only winning, but played in a way that was conducive to rabid fan support, the likes of which hadn’t been seen since Vince Carter’s bitter departure. Somehow, Colangelo’s vision was both too grand and too limiting. He looked to the rest of the world for skilled (and cheap) talent to help him define Toronto’s team, but was unable to forge an emotional connection to the fans with the product he was building. Under the guidance of Ujiri, and with the support of MLSE CEO Tim Leiweke, the organization found inspiration in the city it called home, and broadcast what it saw to a national audience. The Raptors’ sudden transformation into a playoff squad forced them to expedite their timeline for a full-scale brand revival, which was slated for launch during the 2015-16 season. The organization, and the city, couldn’t afford to wait that long. So began “We the North.”

Promotional ads with rain, snow, fire, and eerie shots of huskies just kind of sitting on urban Toronto playgrounds; murals in hallways and elsewhere; big black flags being waved inside and outside the Air Canada Centre. Remember “Fuck Brooklyn”? Remember the ABC broadcast panning their cameras to the hordes of fans in the thousands, screaming their faces off outside the Air Canada Centre? It’s brand promotion disguised as pseudo-revolution, but at the very least it has stirred the pot.

The Raptors understand what they have in their hands, and they’ll continue to build upon this handcrafted identity until it can blossom fully. “You’ll likely see something different next year that is ‘We the North’ on our court,” Hosford said. “We’re just going through the final strokes of design for that. But in terms of something radically different, you won’t be seeing that until the 2016 season.” “We the North” along each of the sidelines would be an obvious choice — like an applause sign that’s always lit.

Cynics will easily cut through all of this noise. But sports fandom is a lot about finding an identity, and this Raptors campaign hits all the notes for the next generation of fans. It comes at a time when interest in basketball has never been stronger, reflecting the shifting tides of Canadian sports fandom. It comes at a time when we could, perhaps, see the second straight Canadian prospect selected first overall in the upcoming NBA draft. By 2016, maybe we’ll consider Drake (who has been a collaborative partner in this brand overhaul) the Raps game Robert Indiana. Maybe the Air Canada Centre becomes the new MECCA or, loftier still, the new Mecca. Or not — probably not. In any case, whatever is coming will be a whole lot more provocative than some optical illusion along the baseline.

Half Baked: Our Kings Fan Is Primed for Victory. Our Rangers Fan … Not So Much