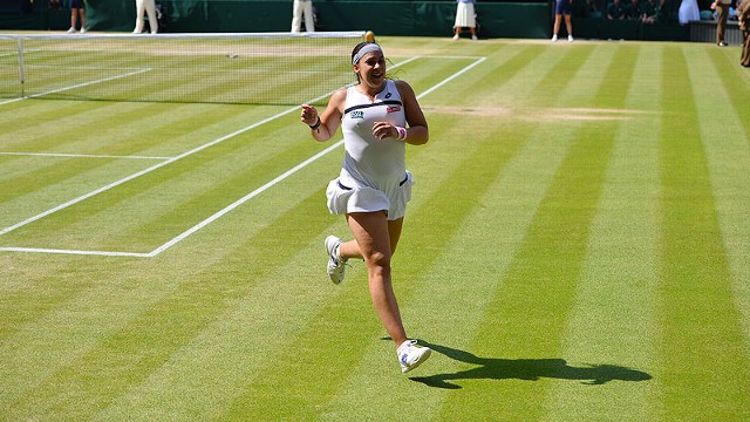 The weirdest thing about this year’s Wimbledon is that the tournament isn’t like this more often. Yes, nine of the 10 top women’s seeds lost before the semifinals. Yes, Nadal, Federer, Serena, Azarenka, Sharapova, etc. Yes, the women’s winner didn’t have to face a single player ranked higher than her. Yes, Andy Murray. Yes, I’m crazy. And yet, it’s unbelievable that there aren’t upsets more often. How many matches hinge on a net cord here, a few millimeters there? It’s crazy that the top players always win the close ones. This time, of course, things were different. Serena Williams won three more total points than Sabine Lisicki in the fourth round — and lost. Roger Federer won one fewer point than Sergiy Stakhovsky’s total in the second round — and lost. Li Na chose not to challenge a bad call on set point in the first set against Agnieszka Radwanska, went on to lose the set, and then lost the match in three. Let’s say she’d challenged that call: It’s possible that she would have won the match, moved through the open draw, and won the title. That wouldn’t have been so strange. Instead, we got Marion Bartoli, which was.

And we got some fantastic tennis, on the women’s side as well as the men’s. It was easy to overlook, with all the disbelief and dread. I get it. You want a star, a name, someone to build the sport around. But looking for the familiar can be a blinkered way to watch. Several of the late-round matches featured brilliant, dramatic, and high-quality play. There was variety, cunning, stellar shot-making, contrasts of power and instincts — in the semifinal between Lisicki and Radwanska alone. Tremendous strengths were on display, as well as stunning flaws. In the quarters, Petra Kvitova crafted exquisite points, mixing penetrating groundstrokes with gentle touch, only to blast the easy volley three feet out. Her opponent, Kirsten Flipkens — ranked no. 262 a year ago — committed only five (official) unforced errors in three sets. Against Bartoli in the quarters, Sloane Stephens showed, in alternating fashion, that she is a surefire star and she’s got a long way to go. She lost. Bartoli used her superior reflexes and flat strokes at incredible angles to attack Stephens’s backhand and passive style. Bartoli was impervious in more ways than one. In a tight spot, at deuce with Stephens serving, she refused to play by claiming it was too dark. The crowd booed her. It didn’t seem to affect her at all.

The general takeaway from Bartoli’s win is that this tournament got what it deserved, a winner who’s odd. The tone of the stories was charmed, but on Twitter the jokes were edgier. Bartoli makes a lot of people nervous. Her attitude on the court is awesomely unembarrassed. She faces the backstop, scrawls of sweaty hair across her face, eyes crazy, feet thudding, arms swinging wildly, before turning to charge the service line. One game away from winning Wimbledon, she sat during the changeover with a dead stare and a piece of banana stuck to her face. Fondly or not, she is called nerdy, quirky, eccentric. The strangest thing about her is that, unlike most of us, she doesn’t seem to care what other people think. She is who she is.

But she is also more complex than the common picture. Bartoli’s win was a total surprise — she hadn’t passed the second round at any tournament all year — but she hardly came out of nowhere. As late as the quarterfinals of last year’s U.S. Open, she nearly beat Maria Sharapova in a thrilling three-set match. Then she did something hard. She fired her coach — who was her father. The process was clearly painful. It took at least one false start. Now she’s working with the French Federation, with whom she’d had a long dispute. (She had not even been allowed to play for France during the Olympics.) When she won Wimbledon her father was there, but her box was filled with others. She thanked the members of her team one by one, sounding as proud of them as they were of her. They may have made a difference to her game. They clearly made a difference to her life.

On air, a BBC commentator inanely speculated that her father had pushed her to be scrappy since she wasn’t “a looker” like Sharapova. It wouldn’t be worth mentioning, except for how beautifully Bartoli responded. “It doesn’t matter, honestly. I am not blonde, yes. That is a fact,” she said after the match. “Have I dreamt about having a model contract? No. I’m sorry. But have I dreamed about winning Wimbledon? Absolutely, yes.”

She is who she is. Wimbledon champion. Extraordinary person. It can be fatal to assume anything about an athlete other than what you see on the scoreboard. But some things, in spite of all the strangeness, seem certain. This is one of them.