Notes From the NFL Combine, Part 1 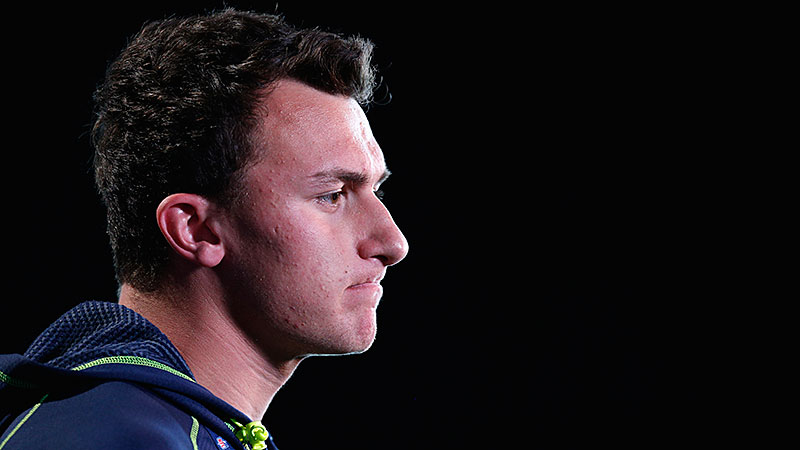 The NFL’s annual craziness in Indianapolis is upon us, and Grantland is there for all (or at least some) of your combine-centric needs.

For all the arguments either way about the combine’s football value, being here is, at the very least, a chance to put some faces to some names. We see and hear head coaches all the time, but for the most part, the league’s general managers are still fairly anonymous. Not every GM goes to the podium during combine week, but plenty do, and I’d say my two favorite stints yesterday came from guys who put together pretty solid seasons in their first year on the job.

Dave Gettleman’s first year in charge of the Panthers was also Carolina’s first trip to the playoffs in five years. Gettleman got his shot late. He’s 63, giving him close to 20 years on someone like Seattle’s John Schneider, and he spent most of his scouting career with the Giants. The lifetime spent in the Northeast is pretty obvious when he flashes what is, without question, the thickest non–Good Will Hunting Boston accent I’ve ever heard. “There is nobody in America that expected Star to be there with the 14th pick,” Gettleman said about his first-round pick from a year ago, Star — or in this case, Stah — Lotulelei. “My Giant buddies were laughing at me because we turned the card in 30 seconds.”

The line was in response to whether Carolina, a team badly needing defensive line help last offseason, really took the best player on the board when taking defensive tackles with their first two picks. Gettleman wanted to make it clear that even though the secondary is a place where the Panthers need to improve, that isn’t going to dictate how their draft works. And the same goes for free agency. Like he has with Greg Hardy, Gettleman referred to Captain Munnerlyn — the team’s best cornerback from a year ago and a current free agent — as a “piece of the puzzle.” It’s a distant second to Gettleman’s favorite phrase this offseason: “cap-challenged.” He dropped it three times yesterday, each time in reference to the tough spot Carolina is in this offseason. Along with Munnerlyn, both Jordan Gross and Greg Hardy are free agents, and Gettleman was fairly noncommittal about each.

Anyone who took the job in Carolina was set for a hard road in his first few years, but if you can glean anything from a 15-minute press conference, Gettleman has the temperament for it. He was candid and loose in a way you’d expect from a lifer finally getting his big chance.

Steve Keim isn’t 63, but he had his own long, grinding road to the top. Keim spent 13 years in the Cardinals’ organization before being named general manager last January. Keim is a former player and career scout, and it feels like he could — and would — talk about football for hours if someone let him. “I’m probably the wrong person to ask,” Keim said when addressing the use of leaked reports and smoke screens around draft time. “I tend to say what’s on my mind.” Keim’s press conference was a highlight of the day for any true football nerd, with topics ranging from needing additional length on defense to deal with these new, mobile quarterbacks (“You have Calais on one side, but Dock’s probably 6-2. A lot of times, when you have breakdowns on your defense, those are the guys that are closest to the perimeter with your outside linebackers”) to Carson Palmer’s usefulness to the Cardinals as they’re currently constructed (“With supply and demand at quarterback, Carson at least puts us in a position where we don’t have to force. And when I say force, you’re looking at a situation where you’re sitting at 20 or wherever we are in the draft, and we feel like we have to have[a quarterback]”).

Keim said that last year, it felt like Arizona was probably three or so players away on either side of the ball from being an elite team. It was a strange, welcome thing to hear from someone who built a team that won 10 games. I wrote after the season that I thought Keim was the executive of the year in the NFL, and yesterday was proof that there’s a way to be very good at what he does without treating every bit of information like it’s a state secret and every question like it’s a waste of time.

Where Is He From? Furman.

His Game in 25 Words or Fewer: A unanimous FCS All-American who spent his college career at left tackle but projects as a middle-round guard in the NFL.

Weirdest Wikipedia Tidbit: OK, so it’s actually a tidbit from talking with Dozier yesterday. Back in middle school, the 6-foot-4, 312-pound Dozier started playing cello. He hasn’t played since leaving for school, but he’s confident that if it’s part of his rookie hazing, he can throw something together from memory. His phone is still packed with classical musical. Not a surprise, but he loves Yo-Yo Ma.

Semi-Related Weird Wikipedia Tidbit: Furman’s mascot is the Paladins, also known as the foremost warriors of Charlemagne’s court. We’ll have to send this up the mascot flag pole to Zach Lowe, but I’d say it’s up there for the weirdest choices imaginable.

Dakota Dozier is prepping for the NFL draft and has finished House of Cards. Those of you lagging behind have run out of excuses.

That’s Tennessee’s Antonio “Tiny” Richardson, who figures to go somewhere between the second and third rounds.

Fun With Cause and Effect

Eric Ebron: "Why teams don't press me is because they can't."

Eric Ebron is the consensus best tight end in this draft and someone who could jump up near the top 10 if he runs well tomorrow. One of the typical (and, admittedly, one of my favorite) questions for all these guys is who their NFL doppelgänger is, and Ebron was quick to say Vernon Davis. Davis is one of the all-time combine legends, weighing in at 254 pounds and running a 4.38 in the 40. Ebron didn’t boast a time, but he did say he plans to beat former North Carolina teammate Giovani Bernard’s time from last year. Eric is … a confident person.

My favorite player conversation of the day was definitely with Bryan Stork, former Florida State center and owner of perhaps America’s greatest beard. Stork won the Rimington Trophy as the best center in the country this year, but projects as only a fifth- or sixth-round pick, mostly because he’s not very big. He also has very little interest in the workout part of the combine. “It’s irrelevant,” Stork says. “I’m a football player. Get me on the white board. You can’t shut me up for three hours, probably. You just have to know your football.”

Most players, when asked about the pros they resemble, jump straight to the best guys at their position, but Stork went a different way: Texans center Chris Myers. Myers is among the best centers in football, but he’s rarely been considered that way, and he’s essentially had the ideal career for a player like Stork. Myers was taken in the sixth round by the Broncos and eventually became a perfect fit for their zone-blocking scheme, which places a value on smaller, more mobile linemen. Stork said he knows that’s his best bet in the league — to catch on with a zone-based team. “That’s what I came from at Florida State — zone stretch,” Stork says. “I’m not no brute, mauler, 350-pound dude. I’m an attacker. I’m quick. I’m scrappy. That’s what I have to be to get by.”

Typically, players are taught to answer scheme questions by saying they’re comfortable playing in any offense or defense, but it’s pretty clear Stork didn’t pay much attention to whatever pre-interview coaching he got. And it was great.

OK, so a quick note about the combine setup. The media availability all happens in one long room on the club level of Lucas Oil Stadium. There are podiums at each end and one along the back wall, and between those are eight tables. The players get trotted out a couple at a time, and where a player gets interviewed depends on what type of crowd he’s expected to get. The big-name crew goes to the podium; lesser-known guys get the tables.

Johnny, as you might expect, got the biggest crowd so far when he spoke earlier this morning. He said all the right things. It was pretty boring.

De’Anthony Thomas was at one of the tables, but that might have been the wrong move. Aside from being one of the more electric yet divisive players in the draft, Thomas also has a reputation as a considerably entertaining human being. He did not disappoint.

De’Anthony, on the differences between him and burgeoning rapper/fellow Southern California native/friend DeSean Jackson: “Instead of being a rapper, I want to be an actor, play in more movies and stuff like that.”

On his “Black Momba” Nickname and Kobe Bryant: “Everyone knows I was way before Kobe Bryant. He was just in the spotlight more than me. It was back in my childhood days. It was great to look up to him, and maybe one day we can do a commercial about it or something.”

On Snoop: “Snoop gave me the nickname. I played in the Snoop youth football league, and my first game against his team, we blew them out 52-0, and that’s when I got the name.”

Best/Worst: The Trade Deadline, Boston College, and the Adventures of Psycho T