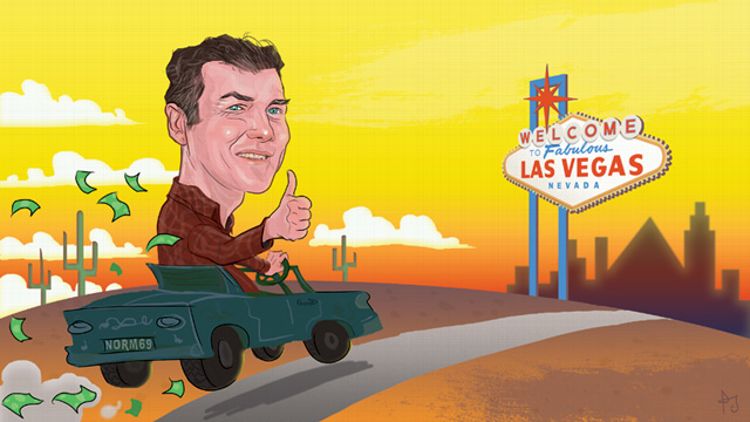 Gabe’s still in Vegas and I’m here at the back of the World Famous Comedy Store on Sunset Boulevard. Adam Eget is hovering around me, his tremulous right hand running through hair four days unshowered, his left hand steadying itself on my shoulder, his rheumy eyes looking somewhere at my shirt. There’s a guy up onstage and I think he’s saying some pretty important things because people are clapping a lot while exchanging sad and knowing nods.

“Do a set. People will get a kick out of it. It’s a good crowd tonight.”

“Nobody wants to see me do a set.”

“Sure they do. Everybody loves you. You’re a legend here at the Comedy Store.”

“Tell your waitress. Maybe she’ll stop charging me four and a quarter for a Coca-Cola.”

I stagger up from the table while thinking about slugging Eget one. Right in his big squidbilly head. A few years ago I woulda too, back when I was young. But now the world is young and I’m a fat old man. So instead, I shamble up to the stage and do my surefire bit about my answering machine. Nobody gets a kick out of it. The whole time I’m thinking about last Friday, when I was happy in the middle of the night, somewhere in the desert.

Gabe Veltri is in the back seat, studying his iPad in silence, running simulations and whatever else he always does. Eget’s at the wheel and can’t stop talking long enough to shut up: how his girlfriend broke up with him on New Year’s Eve, how he lost his sponsor’s number along with his BlackBerry, how he’s gonna move out of his grandma’s just as soon as we get back to L.A. And I’m riding shotgun, listening to Billy Joe Shaver and working on my plan.

I like to gamble. Gamble money on sports. And I’m trying to come up with a plan on how to do this and win money both at the same time. I’m pretty close. First thing is I’ve decided to throw away the spread. Everybody always telling you how Vegas always gets the line just right and how it always comes down to the end. How does Danny Sheridan do it, anyways? How is it always so close? But it’s not true. The spread hardly ever makes any difference. The Vegas line makers are almost never close. I just learned that five minutes ago, in the black night outside Barstow. Just came to me, just like that.

And from that epiphany delivered in a black starless night, the plan comes fast and true. No parlays, no teasers, no proposition bets of any kind. If the book offers it, that’s the reason to decline it. See, here’s the thing. The teams competing, they don’t care about the line. They don’t care about running up a score if they’re ahead or kicking a meaningless field goal when they’re behind. Both teams are trying to win outright. One will. So why not bet with the same intention of the team you’re betting on? That’s the answer, then. The money line. That’s where the money lies. The plan in the desert is complete.

Keeping Resolutions, Vol. 1: A Plan in the Desert

Like all ugly things, Fremont Street is uglier when the sun is bright. This Saturday morning it is scorchingly ugly. But that’s outside. Gabe’s place is OK after all: pale and lifeless with 11 bolts and locks on the door, but with an 80-inch TV and two legless Tempur-Pedic beds. He also installed state-of-the-art air-conditioning, which he somehow preset to 68 through his iPad in the desert. The apartment is a lot like Gabe, real cheap and real smart.

“Whatever. Who the hell is Joe Webb?”

Nobody knows. I was going to bet on Ponder on the money line and now I can’t. I’m in Vegas stuffing cash into Gabe’s safe — which looks nothing like a safe at all, and that no one would ever steal in a million years — and suddenly happy I’m so far away from the Strip. I’m starting to get a little tempted, but I’ll be safe here.

“Let’s go to the El Cortez, fellas, get some fried bread.”

The boys think that’s a capital idea. We’ll go eat breakfast and talk, like civilized gentlemen in the middle of a jungle of vipers, and I won’t lose any money. I will, however, lose Adam Eget. Before the fried bread comes.

I shoulda noticed over breakfast that Adam’s eyes weren’t on Gabe and me. They were looking beyond us, puzzled and curious. But I just thought he was looking at his bleak certain future, not at some guy in a dress and high heels. Before you knew it, Eget was excusing himself to the restroom, and the next thing you knew, Gabe and I had one and a half orders of fried bread each.

“You sure that wasn’t a lady?” I wondered.

“Yeah, of course I’m sure. You ever see a lady dress that sexy?”

“He’ll know soon enough. He’ll be back in an hour or so. Let’s just relax. How’s the chowder in this joint, Gabe?”

“You could do worse.”

The following morning, I’m in the Mirage Sportsbook with 10,000 units in my back pocket. No more, no less. I got here way too early, thinking I’d watch golf, only the Sandwich Islands are taking a beating. Play will be suspended all day. But good news comes. A bunch of cowboys are whooping it up like it’s the Malamute Saloon. They spot my Habs cap and tell me that hockey’s back. Now that might not be big news for you, but for a hick from rural Canada, boy, that’s world-shaking news.

Feeling better, I take the Colts money line and the Redskins money line. Then I head back to Gabe’s and watch myself lose both games on his 80-inch TV. Much later that night, I look out the window and see Adam Eget standing on Fremont Street, shivering and smoking. So I call him in.

“Pretty much as expected. Gabe’s staying for a few days. He just called me, said he’s found a juicy game. Why didn’t you phone?”

“I told you, I lost my BlackBerry. Remember? It has my sponsor’s number on it. But hey, I didn’t drink. One day at a time, right?”

“Right. I thought you’d end up at one of those tiny chapels, with some Elvis impersonator marrying you and that dude.”

“That dude you chose over your friends and your fried bread.”

“That was no dude. Her name was Sammi, with an “i,” and she was crazy in the sack. Real aggressive.”

“Whatever. Let’s get outta here.”

“OK, but definitely not a dude.”

We headed back to L.A. The next night, I stumble offstage to sarcastic applause and realize the waitress has taken away my Coca-Cola, which I’d only half-finished. I see Eget in the shadows.

“Sorry, buddy,” he says. “I coulda sworn they were a good crowd.”

“Pick me up Friday,” I tell him. “I got a good feeling about Denver.”

We’ll take the Challenger and aim it at the evening sun and drive fast, like a snowball rolling straight to hell.