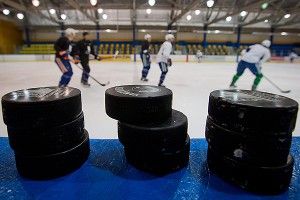 The NHL lockout is almost officially over. The owners ratified the new collective bargaining agreement Wednesday, and the players are expected to do the same by Saturday. The last step will be the signing of a Memo of Understanding. (I like to imagine that it’s a single sheet of paper with “MEMO” stamped at the top, one sentence that reads “Do you understand me?” and then hand-drawn check boxes for yes and no.)

So the lockout isn’t completely dead yet, but it’s so agonizingly close that even Mike Shanahan briefly considered giving it a few plays off.

As we count down to the end of the most pointless work stoppage in sports history, here are five CBA-related questions that are still lingering in the lockout’s final hours …

What’s the deal with this “cap benefit recapture” rule?

Under the old CBA, teams eventually found a loophole that let them lower cap hits by giving star players front-loaded contracts that extended so long, the player would probably retire before the cheap years kicked in. Commissioner Gary Bettman and the NHL hated these contracts, even though every one of them was reviewed and approved by … uh … Gary Bettman and the NHL. But now the league wants to punish teams that signed them, and so the new CBA changes the rules retroactively, and this all apparently makes sense somehow.

In essence, the new “recapture” rule says that a team that saved cap space thanks to a front-loaded long-term contract for a player will have to pay that cap hit back if the player retires early. It sounds fair enough in theory. Some people are even calling it the “Roberto Luongo Rule,” presumably because the “Brian Burke Was on the Negotiating Committee and Hates Mike Gillis So Hey Mike Screw You for That Contract You Gave Roberto Luongo Rule” seemed kind of long.

But once people saw how the rule was actually written, they realized that it didn’t make sense. Like, at all. That means either the NHL has completely lost its mind (always possible), or somebody screwed up the math at 5 a.m. and scribbled out a bad rule that we’re now going to be stuck with for 10 years.

Will any of it matter? Probably not, since the league didn’t bother to close another glaring loophole, which allows players to remain on the injured list for years rather than officially retire. The NHL — saved from its own incompetency by other variations of its own incompetency.

How badly will GMs screw up now that they can trade salary cap hits?

For the first time, teams will be able to keep a portion of a player’s salary and cap hit in trades. Not every dollar, and the whole thing is subject to various rules and limitations, but the bigger point remains: GMs have been given a brand-new option when it comes to trading, and that means some of them are going to find exciting ways to screw this up.

So many questions: Which GM will be the first to use up all three of his team’s “dead cap” trades? Who’ll manage to hit the 15 percent limit the quickest? Which GM will have a trade vetoed because he didn’t understand the rules? Will the answer to each of those last three questions be “Scott Howson”? Do we have to act surprised when it is, and it all happens by next Tuesday?

It’s going to be so much fun to go to a team’s CapGeek page in a few years and read through the names of all the traded players it’s still paying for. They should save time today and just go ahead and title that section of the Flyers’ page “Overpriced Goalie Graveyard.”

The only sad part is that now we’ll never get to see Brian Burke go to work on the new rule, one he’d always pushed for.

(Pours out a fresh pint of beer for Brian Burke, since it’s only fitting that he get to ruin one more Maple Leafs fan’s draft.)

What kind of teams benefit most from a shortened season?

This season will be 48 games long, which is about 60 percent of a typical NHL schedule. That seems like a big enough gap that we should factor it into our predictions for this year. But how?

About the only thing we do know is that a shorter season means more variance — the smaller sample size leaves more room for random chance to take over. In theory, that helps bad teams, since anything that works against true talent levels is good for teams who don’t have much. But those teams are already at a disadvantage because, well, they’re bad, and they should get blown out by good teams who won’t be tempted to take their foot off the accelerator this year.

So basically, you want to be old and also young and streaky and also not streaky and preferably bad but also really good.

Glad we could clear that up.

The NHL won’t release the schedule until the deal is official, but they’ve apparently decided to open the season with an entire day of “rivalry games.” This is a gimmick the league tries every now and then because it means they get to have the Flyers play the Penguins, and that’s basically 90 percent of their entire TV strategy.

It’s a fun idea with one entertaining flaw: Some NHL teams don’t actually have any rivals — or at least, any rivals that don’t have a way better rivalry with someone else. And that means that pairing up teams for a league-wide night of rivalry games quickly turns into the NHL’s version of the saddest grade-school dance ever.

Teacher: OK, kids, everyone pair up with your very bestest rival!

( Toronto and Montreal gleefully leap into each other’s arms. )

Teacher: Aw … that’s OK, little Senators. Why don’t you pair up with (looks around to find that everyone else Ottawa thinks of as a rival already has somebody better) …Winnipeg!

Winnipeg and Ottawa simultaneously: EW, NO!

Teacher: Just go with it, you ungrateful brats.

If that wasn’t enough fun, this year we’ll get an added bonus dose of sadness. Since the two conferences don’t play each other, and each has 15 teams, two franchises will have to sit out entirely, like they’re a skinny old guy on Survivor.

I’ll admit it: I’m a little bit too excited to find out who the rejects are. I hope the NHL has all the teams line up against a chain-link fence before they read the schedule.

How quickly can we just get this season over with and move on to the chaos of the 2013 offseason?

OK, sure, it’s nice to have hockey back, and this season will be fun. But for those of us already preconditioned to look ahead to next year (hello, Islander fans!), the next few months are just the undercard to the real main event: the 2013 offseason.

Put simply, it’s going to be chaos. The salary cap slams down, amnesty buyouts kick in, and GMs will just be starting to figure out the new CBA’s various wrinkles and loopholes. Some teams will be flush with money to spend, while others will have to shed contracts just to ice a roster.

Add in a top-heavy draft and the potential for the best free-agent class in years, and it’s a recipe for a frantic few months. Heck, in a nice change of pace, the owners might even hand out a few contracts they actually intend on honoring this time around.

After months of lockout misery, the next few months should be a lot of fun. Bring it on.