NHL Apocalypse Watch: The Beast Ascendeth Out of the Bottomless Pit 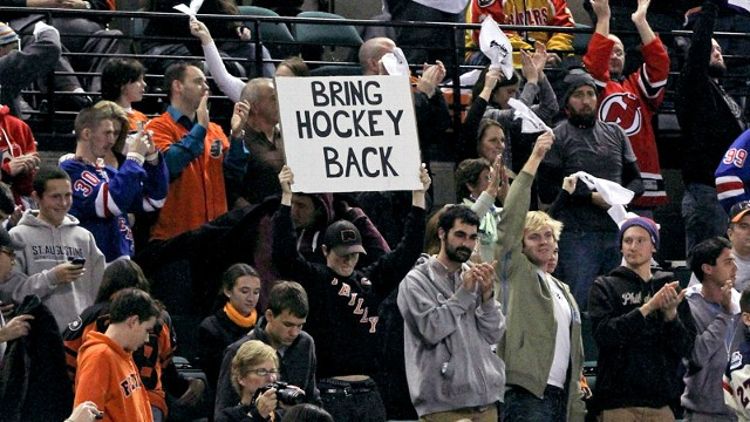 So what was it that made YOU finally lose your mind over the NHL lockout? For me, it was a charity hockey game in Atlantic City meant to raise money for Hurricane Sandy relief!

Not that there was anything wrong with the Operation Hat Trick game or its cause. On the contrary, by all accounts last Saturday’s game was a wonderful event, filled with tri-state-area-and-beyond NHL stars, attended by diehards who chanted “We want hockey” again and again, held in happy proximity to slot machines and comped beverages, and responsible for raising a half-million dollars. And despite being a no-contact exhibition game, it contained plenty to entertain the crowd: At one point, Steven Stamkos was awarded a penalty shot on Henrik Lundqvist.

I wasn’t even at the game; I read about the whole thing on Twitter. And it wasn’t even that insane of a highlight: Stamkos tried a nifty move that didn’t go in, and that was that. Still, that penalty shot is what chipped away at the sad remnants of my previously blasé demeanor. It’s what finally broke me.

Steven Stamkos is 22 years old; he’ll be around for a long time, we hope, but still — the guy scored 60 goals last year, and we’re not getting to see how he might have followed that up. (He told Pierre LeBrun that the lockout has been “agonizing” and that he’s never gone without a competitive game for this long.) Lundqvist isn’t an old man either, but at 30 he’s smack in the middle of what should be his prime. He’s one of the league’s top three or five players, no matter how you slice and dice it — by skill, by marketability, by pure platonic beauty — and yet here we are, limited to glimpses of him at the top of his game as recorded on camera phones in an Atlantic City arena and uploaded to YouTube.

Today the players will fail to receive their fourth paychecks of the year, meaning they’ve now lost nearly a third of their salary so far this season. It’s all wrong, all of it is all wrong. Brad Richards is fronting a line of shirts called UNTUCKit that are named after different wine-making regions and are “designed to be worn untucked.” Mike Fisher has been reduced to hoisting “best purse holder” trophies and interviewing his wife, Carrie Underwood, on the red carpet. Cory Schneider is getting peppered with questions in Italian as mines explode in the background. Make it stop!

I shouldn’t be sitting here half-wondering about whether that penalty shot was symbolic of this lockout and, if it was, which guy should be the Donald Fehr. (The muffed puck obviously represents the miffed fans.) At this time of year, I should be writing about which coaches are on the hot seat or which players are trade bait. Even bad NHL news would be infinitely better than no news at all.

What’s the latest? It’s been a trying 10 days. On the Wednesday before Thanksgiving, the NHLPA made a proposal (and then strategically leaked all the details, which was such a warning sign) that many hoped might trigger some positive momentum. Would it shock you if I told you that it definitely did not?

Last weekend, the idea of union decertification began to get thrown around. On Monday, the league and players’ association announced that they would be trying out mediation. Bill Clinton was not, tragically, selected to lead these efforts; instead, the group featured a federal mediator with a Twitter account so unfortunate that by the day’s end he had already been ridiculed and removed from an assignment that had yet to begin. The two sides spent two days in meetings, but no progress was made. “The presiding mediators concluded that the parties remained far apart and that no progress toward a resolution could be made through further mediation at this point in time,” said NHL deputy commissioner Bill Daly in a statement issued yesterday.

Next Wednesday the NHL’s Board of Governors will convene for its quarterly meeting in what ought to be a pivotal gathering for the direction this lockout will take. If I had to guess, I’d assume the league will come out of it swinging even more wildly. We could be in for a pretty glum holiday season.

One bit of news that may scare you: Bill Daly said something else notable yesterday … that he supports a next step of putting the players and owners in the negotiating room sans himself, Gary Bettman, and the frères Fehr. As Nick Cotsonika points out, this has the feel of a trap. If the reports are true that Boston Bruins owner Jeremy Jacobs has been berating people on his own side of the table, I can only imagine what might transpire in a players-owners showdown. (I would support it much more — like, 100 percent — if we could watch the proceedings via a live feed.)

One bit of news that may soothe you: Eh, it’s pretty ugly out there right now. The best recent glimmer of hope I could find was Thought No. 5 in Elliotte Friedman’s always-indispensable 30 Thoughts column: basically, that if a deal takes place it will be at the eleventh hour, and that many executives seem to think that eleventh hour will chime somewhere in the first few weeks of January. In other words, Gary Bettman saw his shadow and we have at least six more weeks of winter. But then maybe it will be spring? Or who knows, maybe we’ll never see the sun again. This might be the bleakest good news of all time.

Proper panic level at this point? I’m starting to enter the “trapped in a Brazilian elevator with a ghost” zone. I can’t help it! I know things are bad when the uproar in the NBA last night over Gregg Popovich sitting his starters during a nationally televised game made me think downright fondly of that toe-curlingly awkward showdown last season between Tampa Bay’s trap and Peter Laviolette’s steely resolve. If only we knew then just how good we had it!

I feel like a parent of a troublesome runaway teen at this point. I know things were difficult, and we fought a lot and said things we both didn’t mean, and doors were slammed and eyes were rolled, but come back, NHL. Despite all of our problems, we just really, really miss you.